Adding a splash of colour to schools 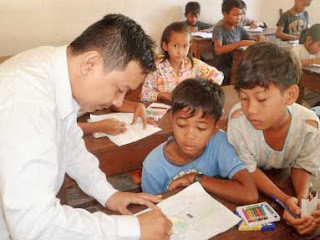 Photo by: Craig Miles
Colors for Cambodia art teacher Diep Kiri at Thaizo School in Siem Reap.
------------------------------------------
Colors of Cambodia has already produced one star art student, who has graduated to college in Phnom Penh
------------------------------------------
via CAAI
Friday, 18 February 2011 15:00 Craig Miles
In a Thaizo School classroom in Siem Reap Province, children are laughing, drawing and colouring. The class is run by Diep Kiri, an art teacher from the NGO Colors of Cambodia.
On the board is a drawing of a cow and a sheep in a meadow. Most of the children are copying the drawing onto their own paper supplied by Colors of Cambodia, while a couple are using their own imaginations. One is drawing an ocean of fish and another creates a dolphin swimming, with a mountainous backdrop. The others happily colour in their drawings, with Mr Kiri walking around to lend assistance. Some of the kids have even learnt a spoon technique, where they scrape the crayon that they drew on the paper to produce a smudge effect.
Colors of Cambodia was started in 2003 by William Gentry, an American artist, film maker and businessman. He was inspired by the artistic history of Cambodia, but when he visited schools in Siem Reap he saw villagers did not have an opportunity to use art materials. This fuelled the creation of a charity which has blossomed, and three years ago the organisation was able to send out teachers to schools in Siem Reap Province.
“It’s a pretty cool thing and I’m pretty proud of it,” Gentry says. “What these kids need is attention – that’s what they lack. That’s what I try to do in the project – give them hope and attention.”
William D. Gentry is president of Positronic Asia Pte Ltd, based in Singapore. He also started a multimedia company which has produced a Bollywood movie called The Genius of Beauty, due to be released next year.
With an international cast and original musical score, The Genius of Beauty is an outrageous comedy with, according to a press release, “lots of gorgeous women”.
The film, written by William Gentry and directed by Aarin Mehta, was filmed on location in Singapore, Indonesia and India, and actors include Daniel Jenkins, Vishakha Singh, Suprirya Sukhla, Mushtaq Khan and Rob Jenkins.
But away from the boardroom and the film lot, Gentry likes to get down to grass roots level.
“I’m more of a creative guy,” he tells 7Days, “I like taking off my suit and getting involved – that’s how I got started with Colors of Cambodia. What I get out of it is more me going there and spending time with the kids.”
Gentry says Colors of Cambodia teaches art to almost a thousand children every month in seven different schools. Kids are free to come and go as they please during the art classes.
At Thaizo School during the class, some of the children coloured their pictures and left, while others seized the opportunity to grab more paper and scribble away.
Colors of Cambodia gallery manager Sin Saroeun said the group supplies paper, crayons, pencils, watercolours, acrylics and sometimes drawing blocks and canvases.
He says most of the art classes run for one hour a day, with two schools having four hours a day for two days a week.
“We choose public schools and go to the school directly and talk to the school master,” he says. “Most of our classes run between 11am and 12pm after the general school program has finished.”
The teachers at the schools scout for children with talent, and invite them to participate in advanced classes at the Colors of Cambodia gallery in Old Market area. Some of the paintings the children produce from these classes are on sale at the gallery, with all profits going towards new materials and community needs. Mr Saroeun says small paintings range from $6 to $18, with larger paintings from the advanced students selling for around $50.
“It’s unbelievable how fast they learn,” says Saroeun. “Some of these paintings were produced by students who have only been doing it for six to 12 months.”
Gentry says Colors of Cambodia has already produced one star art student, who has graduated to college in Phnom Penh. “He’s our first star. He’s going to make it some day.”
He says the program is dependant on how much time he can put into it, and wants to eventually find a manager to help take it to the next level.
“We could take it to more schools and have more teachers,” he says. “We could take it all over the country. We do a lot of fundraisers so we don’t have a shortage of money. It’s more a time issue. The sky’s the limit; it’s just a matter of time.”
Walking into the NGO’s gallery, it is easy to forget how young some of the artists are and the limited time they have had to practice their art skills.
It reaffirms the reality that many of these children have something special to give.
Posted by CAAI News Media at 7:25 am