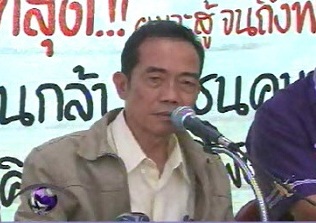 via CAAI
BANGKOK, Feb 18 -- The Thai Patriots Network (TPN) has sacked Nathaporn Toprayoon as its legal advisor overseeing the cases of two Thais --Veera Somkwamkid, a key network activist and his secretary Ratree Pipattanapaiboon, both jailed in Cambodia--and network representatives will visit them in prison to ask for their final decision on appeal attempt, according to leading TPN activist Chaiwat Sinsuwong.
Mr Nathaporn said Thursday that he has received a request from the families of Mr Veera, network coordinator, and Ms Ratree, asking the network to drop the plan to appeal their cases and submit a request seeking an intervention from international organisations in the case.
He said their families were worried about their living circumstances in the Cambodian prison and wanted them back to Thailand as soon as possible so that they would ask the Thai government to seek a royal pardon from the Cambodian king.
Mr Chaiwat said his group had not yet been told by the prisoners' families that the two would not appeal their verdicts and would seek a royal pardon from the Cambodian king instead.
TPN members have not yet met the two, but will stick to their principle, which is to help them in fighting the case, Mr Chaiwat said.
Mr Chaiwat said his group had contacted the Thai embassy in Phnom Penh asking it to facilitate TPN leaders meeting with the two on Feb 25 and to “respect their decisions.”
The Cambodian court on Feb 1 ruled that the two were guilty of espionage, illegal entry and trespassing in a military zone. They were sentenced to an eight-year jail term and a 1.8 million riel (US$450) fine for Mr Veera and a six-year jail term and a 1.2 million riel (US$300) fine for Ms Ratree.
An appeal could be filed within 30 days.
Mr Chaiwat said the TPN committee stripped Mr Nathaporn of his role as legal advisor after the group found that they “couldn’t work well with each other,” and gave no further details.
Meanwhile, Mr Nathaporn said in an telephone interview that he actually has not been officially appointed by TPN as the network's legal adviser.
Mr Nathaporn said he volunteered to help in the cases of Mr Veera and Ms Ratree because he knew Mr Veera personally.
He said the TPN has no right to dismiss him as part of the legal advisory team as he was not appointed and has never attended network meeting except in Mr Veera's case that he join the two or three meetings.
He said it was unfair to eject him just because he told a truth different from the network's ideals.
Mr Nathaporn added that Mr Veera and Mr Ratree had signed letters giving power of attorney naming him as their proxy in legal matters related to the case so that only two of them have rights to dismiss him
Mr Veera and Ms Ratree's families were scheduled to hold a press briefing on Saturday over the matter, but time and place would announce later. (MCOT online news)
Posted by CAAI News Media at 9:00 am

An intriguing discussion is worth comment. I believe that you should publish more on this topic, it might not be a
taboo subject but generally folks don't talk about these topics. To the next! Best wishes!!