Why Now for Thai-Cambodia Row? 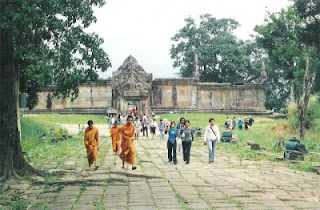 The ongoing border conflict between Cambodia and Thailand can’t just be about the Preah Vihear Temple—if the clashes really are motivated only by patriotic determination to defend ownership, then these two neighbours have gone mad.
The ‘idiocy of the situation,’ as described by Thailand-based twitter user @thaitvnews refers to the irony of two Buddhist countries fighting over a ruined 900-year-old Hindu temple. Let’s also not forget that the contested territory on which the temple is located covers only about 1.8 square miles (4.6 square kilometres). It’s therefore difficult to comprehend why two countries are ready to go to war, and risk dangerous instability in the region, over such a tiny piece of land.
But if it’s not about the temple, then what are they fighting for?
My guess is that the real aim of both Cambodian Prime Minister Hun Sen and Thai Prime Minister Abhisit Vejjajiva is to strengthen their respective domestic leadership credentials. The border dispute, despite its unpleasant portrayal in the international press, serves the political interests of Sen and Vejjajiva. The two leaders seem to be basically using this ‘patriotic war’ to drum up civilian support for their governments. More specifically, they could be planning to project the image of a decisive leader ahead of elections—Thais go to the polls this year, and Cambodians next year.
The war could also be a pretext for requesting bigger military budgets this year, while also helping distract the public from their empty pockets and lack of freedoms.
Whatever the motivations, we shouldn’t underestimate the power of nationalism. More Cambodians, for example, seem to be expressing anger in cyberspace these days, especially since their leaders reminded them that the Khmer Empire was once the oldest and largest in the region, but that centuries of war and invasion have trimmed the country to the size of the state of Missouri. Meanwhile, ultra-nationalists in Thailand are trying to prod the government to take over Cambodia’s Angkor Wat in exchange for the Preah Vihear Temple.
Sen and Vejjajiva, who are supposed to be calming their citizens, are only encouraging more hatred by issuing bellicose political statements.
The United Nations is hesitant to intervene, while the Association of Southeast Asian Nations, as expected, is powerless to implement a peaceful settlement of the issue. Still, they probably offer the best outside chance of preventing the tense situation on the border from deteriorating.
But more importantly, let’s hope that the peace-loving citizens of Cambodia and Thailand reject the war rhetoric of the ultra nationalists in their own countries. They should realize that real patriotism isn’t about supporting warmongers, but exposing the unpatriotic motives of their politicians.
Posted by CAAI News Media at 8:17 am