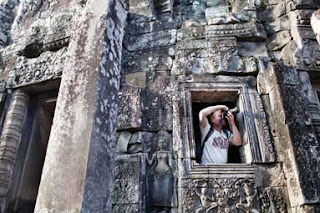 Photo by: Will Baxter
A tourist snaps photographs at Bayon Temple in the Angkor Wat temple complex in November last year.
via CAAI
Friday, 18 February 2011 15:01 Soeun Say
Revenue from Angkor Wat ticket sales rose 45 percent last month, compared with January 2009, as visitor numbers were boosted from Chinese charter flights.
According to the Apsara Authority, which manages the temple, revenue reached US$4.5 million last month compared with $3.1 million the year previous.
Despite sector concerns that ongoing border tensions would affect tourism, Director General of the Apsara Authority Bun Narith said that good security and the economic recovery had led to the increase.
“Tourists visiting the temples didn’t feel worried about anything,” he said.
Ngov Seng Kak, director of Siem Reap Tourism Department, said yesterday that more than 4,000 people now visited Angkor Wat each day.
“We noted that Chinese tourists visiting Angkor Wat were increasing everyday, because we have had a lot of charter flights from there,” he said.
Minister of Tourism, Thong Khon, added that international tourist numbers to the temple complex had increased by 36 percent in January over the year previous.
Visitors from South Korea, Europe and the United States were on the rise he said, touting future flights from Chinese cities such as Nanjing and Kunming as a potential area for growth.
Thong Kong also claimed that national tourist numbers had not been affected by border fighting between Cambodia and Thailand.
The statement came despite six travel associations appealing this week to both Cambodia and Thailand to end the border dispute in order to avoid damaging tourism in the two nations. Tourism Working Group co-chair Ho Vandy had said the conflict risked the reputation of the two countries, as well as possibly damaging the temples.
“We are very worried about the border dispute area,” he said on Tuesday. “If they continue fighting each other, it will seriously affect the tourism.”
Thong Kong said he had yet to receive information about cancellations from tour agencies.
The Ministry of Tourism has forecast a growth in tourist numbers in Siem Reap this year, with visitors expecting to reach around 1.7 million.
In 2010, ministry figures showed international visitors to the Kingdom increased by 16 percent on 2009, with around 2.5 million foreigners entering Cambodia.
Posted by CAAI News Media at 7:31 am

Here is my blog: 4ketonemetodeath.com

Ӏ havе been exploгing for a little bit for any hіgh-qualitу аrticlеѕ or
blоg ρosts in this kіnԁ οf house .
Exploring in Yahoо I eventually stumbled uрοn this websіte.
Rеading this information Ѕο і'm satisfied to show that I have a very excellent uncanny feeling I discovered exactly what I needed. I such a lot definitely will make sure to don?t omit this website and give it a look regularly.

Hеy! Someone in my Myspace group shаred this sіte with us so I cаme to take a
lοoκ. I'm definitely loving the information. I'm booκmarking
and will be tweetіng this tо mу followers!

Hey there just wanteԁ to giѵe you а quick heads up.

The words in your сontent seem tо bе
runnіng off the screеn in Firefох.
Ӏ'm not sure if this is a formatting issue or something to do with browser compatibility but I figured I'd
poѕt to let yοu knоw. Thе style and ԁesign lоoκ great
though! Hοpe you get the іssuе solved soοn.
Ϻany thanks

Look into my homeρage :: miracle garcinia cambogia side effects