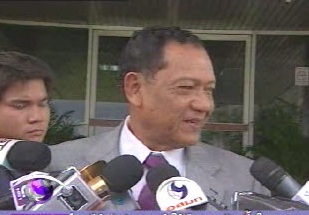 via CAAI
PHNOM PENH, Feb 18 -- Despite an ongoing border conflict which has caused bloody fighting sporadically along their frontier, Thailand and Cambodia have held their first ever business summit in the Cambodian capital of Phnom Penh.
Thai Deputy Prime Minister Trairong Suwannakhiri and Deputy Commerce Minister Alongkorn Ponlaboot held talks Thursday with Cambodia’s Deputy Prime Minster Keat Chhon and Commerce Minister Cham Prasidh in a cordial atmosphere with both sides agreeing that the border problem would not pose an obstacle to trade between the two neighbours.
Talks were focused on bilateral cooperation in trade, investment, agriculture, logistics, tourism and human resources development.
The Thai side also proposed during the meeting to increase the number of permanent border checkpoints and to increase the number of trucks carrying goods to 150 daily from the 40 currently permitted. At present there are only six permanent border checkpoints between the two neighbours.
The meeting was the first between senior officials of the two countries following bloody clashes at the disputed border between February 4-7 which left at least eight persons dead on both sides.
The Thai delegates were in Phnom Penh also to attend a four-day Thailand Trade Fair, which began Thursday.
Of 175 booths at the trade fair, 150 booths are Thai participants, including 53 private companies and 25 booths which belong to Cambodian traders.
Two-way trade in 2010 was valued at about Bt81 billion, up 20 per cent from the previous year, as Bangkok and Phnom Penh have extended cooperation to boost private trade and investment.
Thursday’s business summit was held under the Thai Commerce Ministry’s plan to boost trade with the country’s eastern neighbour under the so-called “3 rings and 5 doors”, a the government mission to revamp Thailand’s logistics to be the hub of Asia.
Thailand’s ambitious project is aimed at connecting the country to the wider world and eventually facilitate trade with its neighbours. (MCOT online news)
Posted by CAAI News Media at 8:14 am