ASEAN's moment to prove it can settle disputes decisively 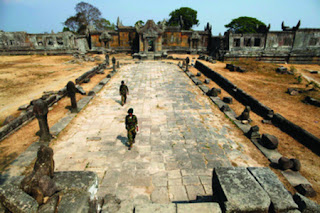 Cambodian soldiers at the Preah Vihear temple. The standoff between Thailand and Cambodia is a litmus test of ASEAN's ability to resolve disputes between its members. REUTERS
by Mahdev Mohan and Lan Shiow Tsai 05:56 AM Feb 19, 2011
A feud over an ancient Hindu temple situated along the Thai-Cambodian border may just prove to be a litmus test for Indonesia's chairmanship of ASEAN and the regional body's ability to act decisively to maintain peace and stability in the region.
A UNESCO World Heritage site, the Preah Vihear Temple and the surrounding areas witnessed gunfire and bloodshed on both sides this month as Khmer and Thai military forces came to blows after decades of relative peace along the border.
After emergency meetings last week, the United Nations Security Council has refrained from sending UN peace-keeping forces to Preah Vihear. Instead, the council has chosen to place the responsibility of settling the dispute squarely upon ASEAN's shoulders.
ASEAN should rise to the challenge and demonstrate it can peacefully and conclusively settle disputes in its own backyard. ASEAN's much-criticised reluctance in the past to respond effectively to state-sponsored human rights violations within Myanmar should not detract from the fact that it is well equipped to settle inter-state disputes. Especially if Indonesia were to drive settlement negotiations.
Under the ASEAN Charter, ASEAN chairman Marty Natalegawa of Indonesia can and should continue to provide good offices, conciliation or mediation in order to resolve the dispute. He should negotiate a cease-fire to quell tensions, emphasising that the peaceful resolution of border disputes is in the common interest of all ASEAN states.
Strong Indonesian leadership is particularly important in this case since ASEAN secretary-general Surin Pitsuwan, a former Thai Foreign Minister, would not be seen as a neutral negotiator.
Going further, ASEAN could, with Thailand and Cambodia's consent, convene a High Council pursuant to the 1976 Treaty of Amity and Cooperation.
Comprising a representative from each of the 10 ASEAN member states, the High Council could take cognizance of the dispute as one that is likely to disturb regional peace and harmony. It could also make recommendations on how to solve the dispute, including by establishing a committee of inquiry to look into it.
Cambodia's allegations that Thailand deployed cluster munitions during the recent clashes make it incumbent upon ASEAN to conduct such an inquiry. Even though neither Cambodia nor Thailand is party to the newly-inked Convention on Cluster Munitions which prohibits the use of such weapons, an ASEAN inquiry would send a message to the international community that it expects member states to adhere to international law, as provided in the 1976 treaty and its charter.
In the years leading up to its projected transformation into an integrated and interdependent economic community by 2015, ASEAN should not miss any opportunity to resolve tensions and enhance cooperation between member states. The Preah Vihear dispute is such an opportunity, the peaceful resolution of which would gain Indonesia the respect and confidence it desperately needs to table other regional economic, security and human rights initiatives this year to bring ASEAN closer together.
Some call on Thailand and Cambodia to submit their dispute to an international court or arbitral tribunal. But a 1962 decision by the International Court of Justice at the Hague which awarded sovereignty over the Preah Vihear Temple to Cambodia on the basis of legal principles alone did not prevent the current dispute. After all, international law is only as strong as the abiding faith of states in respecting it. That faith is shaken when domestic politics are allowed to stir up age-old ethnic and nationalist tensions between neighbours.
To encourage Thailand and Cambodia to respect international law and the economic imperative to maintain peace and stability in the region, Mr Natalegawa should capitalise on the benefits of collaborative decision-making. He should lobby the other eight member states at the coming ASEAN foreign ministers' meeting on Feb 22 to persuade these two countries to reach an agreement.
Failing this, the ministers should seek to convene the High Council to inquire into the conflict and explore settlement options that are attuned to historic sensitivities and designed to ease tensions and deter future clashes and atrocities.
Given that many disputes between ASEAN member states are currently mediated through ad hoc bilateral mechanisms, the collective resolution of the protracted Thai-Cambodian conflict will bolster ASEAN's capacity to solve disputes and demonstrate the growing maturity of key institutions within the body.
It is high time that ASEAN leaders, power-brokers and negotiators prove their mettle and restore Preah Vihear, which means "sacred shrine" in Sanskrit, to its former glory as a symbol of peace and learning in the region.
Mahdev Mohan is Assistant Professor of Law at the Singapore Management University and Associate Fellow with the Singapore Institute of International Affairs. Lan Shiow Tsai is Policy and Governance Associate, Access to Justice Asia LLP.
Posted by CAAI News Media at 11:47 pm