Thailand intends no peace with Cambodia 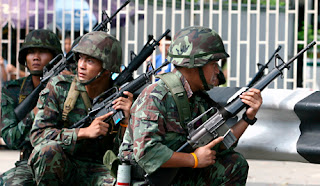 via CAAI
Feb 18, 2011 21:24 Moscow Time
Thailand’s Prime Minister Abhisit Vejjajiva intends no ceasefire talks with Cambodia.
“It’s not us who started this conflict, and it’s not us who must stop it,” he said in an interview to The Bangkok Press newspaper.
The armed conflict between Cambodia and Thailand was caused by a dispute over a piece of land where an ancient Hindu temple Preah Vihear stands.
12 people have already been killed in fire exchanges.
On Thursday, Cambodia suggested signing a peace deal, with ASEAN as mediators. Thailand, however, insists on direct talks.
This is to show to UN of how peace talk between Thai and Cambodia will work
Posted by CAAI News Media at 9:59 am