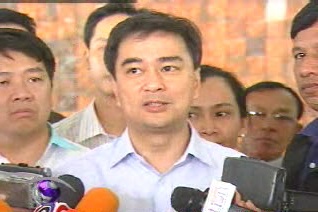 via CAAI
BANGKOK, Feb 19 -- Thai Prime Minister Abhisit Vejjajiva admitted that Thai Cambodian border tension has affected legal proceedings to help two Thais jailed in Cambodia while affirming that the government is still exploring ways to help free them.
The Cambodian court on Feb 1 ruled that Veera Somkwamkid, Thai Patriots Network coordinator, and his secretary Ratree Pipattanapaiboon were guilty of espionage, illegal entry, and trespassing in a military zone. They were sentenced to an eight-year jail term and a 1.8 million riel (US$450) fine for Mr Veera and a six-year jail term and a 1.2 million riel (US$300) fine for Ms Ratree. An appeal could be filed within 30 days.
Mr Abhisit said the government has to study options to help them and that as far as he knows, the families of Veera and Ratree have not yet submitted a request to seek a royal pardon from the Cambodian King. The premier said he had told their two families to think carefully before making a decision whether to appeal or request a royal pardon. The border tensions had also affected the case, he added.
Asked whether the leaders of the two nations could hold talks to speed up help for Veera and Ratree, Mr Abhisit said he would try, but the situation should be evaluated carefully as the political situation in Thailand and Cambodia was also affecting the case. He also urged the Thai Patriots Network to think twice before making decisions on movement, as it may have effect on Veera and Ratree. He said the government would do its best to help but steps must be taken with caution and good timing and not affect ties at the national level.
China's Xinhua news agency quoted Cambodian Prime Minister Hun Sen as saying that there would be no royal pardon for Mr Veera. "Don't come to persuade me to ask King Norodom Sihamoni for royal pardons. It is impossible at this time," said the Cambodian premier. He added, "Complying with the law properly, the two must serve at least two-thirds of their jail terms before being considered for royal amnesty."
Meanwhie, Mr Abhisit also denied reports that ASEAN was asked to send forces to prevent more border clashes between Thailand and Cambodia. He said Thailand reaffirmed its commitment to resolving any pending boundary issues peacefully through existing bilateral mechanisms.
The prime minister added that he was unaware Cambodia might take the disputed border case before the International Court of Justice for clarification on its 1962 ruling. The Court then ruled that the 11th century Preah Vihear temple belonged to Phnom Penh, but both countries have since been in dispute over a 1.8-square-mile (4.6-square-kilometre) tract of land near the temple. (MCOT online news)
Posted by CAAI News Media at 11:52 pm