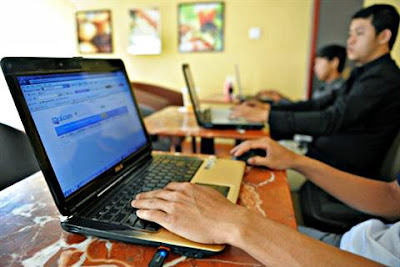 Photo: AFP
Cambodian men using the Internet at a coffee shop in Phnom Penh (2010 File)
For the past few weeks, several websites critical of the Cambodian government have been unavailable through a number of Internet service providers, or ISPs. Although the government has denied ordering the sites censored, a leaked memo indicates it indeed ordered access cut.
The Phnom Penh Post newspaper this week published extracts from leaked minutes of a meeting at which the minister for post and telecommunications asked Internet service providers to block access to critical sites.
The Post also ran extracts from an e-mail sent by a senior ministry official congratulating 10 ISPs for helping to block the websites, and admonishing three others for not doing so.
Human rights group LICADHO, which issues an annual report assessing Cambodia’s media, objects to the web censorship.
LICADHO consultant Mathieu Pellerin says the revelation of state censorship is significant.
"Beginning to censor the Internet is basically censoring the last unregulated space for Cambodians to express themselves and reach information that would otherwise not be accessible to them,” said Pellerin. It is an important milestone in the ongoing crackdown on freedom of expression and access to information."
Cambodia’s press technically is free, but every television station is pro-government as are most radio stations. The government uses the threat of criminal defamation charges to curtail criticism.
Internet service provider EZECOM, one of the biggest here, said for weeks that the government had not told it to block sites, and that it had not blocked any.
But EZECOM was one of the 10 ISPs praised in the official’s e-mail for blocking a number of sites, including KI-Media.
EZECOM’s chief operating officer would not comment on the Post’s reports.
The half-dozen or so blocked websites are often critical of the ruling party. Prime Minister Hun Sen is listed on the KI-Media website, for instance, in a column titled "Traitors”"
The site shows exiled opposition leader Sam Rainsy in its “Heroes” column.
KI-Media often runs articles critical of the ruling party and its supporters.
LICADHO’s Pellerin says because Cambodia’s Internet market is small, the effect of barring access to these websites is more significant than it might seem.
"And so you don’t have as many sites as you would have in other countries, so few sites but in a smaller pool of sites affects quite a lot of viewers, and these sites that have been censored were quite popular with the Cambodian community," he added.
The minister for post and telecommunications said on Thursday that there was no policy to block access to websites.
Posted by CAAI News Media at 8:20 am