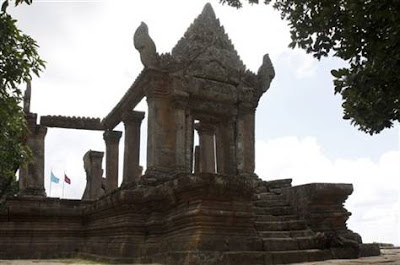 
PHNOM PENH, Cambodia — Renewed fighting between Cambodian and Thai troops along the countries' disputed border killed a Thai soldier Saturday and sent thousands of people fleeing before military commanders agreed on the second cease-fire in two days.
The fiercest border clashes in years also damaged a landmark 11th century temple near a strip of disputed land that Thai nationalists have seized on as a domestic political issue.
At least five people have died in two days — one civilian and one soldier from Thailand and one civilian and two soldiers from Cambodia, according to officials from the two countries. Each side blames the other for starting the fighting.
Tensions between the Southeast Asian nations have risen in recent days because of demonstrations in the Thai capital, Bangkok, demanding that the government oust Cambodians from land near the Preah Vihear temple. Thai nationalists claim the land is actually part of Thailand.
The demonstrators — from the same group, the People's Alliance for Democracy, that in 2008 occupied the Thai prime minister's offices and Bangkok's two airports in a bid to force out two previous governments — called Saturday night for Thai Prime Minister Abhisit Vejjajiva and his Cabinet to step down, saying they had failed to safeguard the country's sovereignty.
The rally by the PAD — also known as the Yellow Shirts — has raised tensions in a country still recovering from political violence last year in which about 90 people died. However, the several thousand who attended Friday night's protest was small compared to major turnouts in the past.
While a full-blown war is unlikely, nationalist passions are inflamed in both countries — with no clear way to settle the long-standing territorial dispute surrounding the temple, built during a time when Cambodia's Khmer empire ruled over much of Thailand.
Thai army spokesman Col. Sansern Kaewkamnerd said Thai and Cambodian regional commanders met Saturday and agreed to stop fighting and not deploy more troops to the area.
The two sides also agreed that Thailand would suspend construction of a road to the disputed area, which measures just 1.8 square miles (4.6 square kilometers), according to the private Cambodian Television Network, which is close to the government. A Thai statement did not mention the matter.
The latest round of fighting began Friday on land near Preah Vihear temple, a U.N. World Heritage Site that belongs to Cambodia under a 1962 World Court ruling disputed by many Thais.
Several mortar and artillery shells exploded just yards (meters) from Preah Vihear, slightly damaging its walls and setting grass and several trees nearby ablaze, said Gen. Chea Tara, the deputy commander of Cambodia's armed forces. He said two of his troops died.
CTN showed footage of the damage, primarily on stairs to the temple that were pitted by shrapnel.
Thailand's Foreign Ministry said at least 3,000 people have fled their homes, while Sar Thavy, deputy governor of Cambodia's Preah Vihear province, said 1,000 families had been evacuated there.
Thailand initially said the flare-up could have been caused by a misunderstanding, but Cambodia described it as a deliberate "Thai invasion," claiming that as many as 300 Thai soldiers advanced Friday on a small pagoda to try to take down the Cambodian flag. TV footage Saturday showed the roof of the pagoda — erected 13 years ago — almost totally destroyed, allegedly by Thai shelling, and a Buddha statue inside damaged.
Ath Vicheth, a Cambodian soldier in the area, told The Associated Press by telephone that Saturday's clash began after Thai soldiers tried to cross the border in search of missing comrades.
Thai army spokesman Sansern, however, denied the claim and said no Thai soldiers were missing or captured. He said eight Thai soldiers had been wounded since Friday and 13 homes were either burned down or damaged. One Thai soldier was killed Saturday, he said.
The Preah Vihear issue was virtually dormant until Cambodia successfully applied in 2008 to UNESCO to have the temple declared a World Heritage Site, an application backed by the government in power in Thailand at the time.
Thai nationalists have argued that the action threatened Thailand's sovereignty, though their protests were seen mainly as a way of rallying criticism to help oust the Thai government. Both countries' leaders, defending their patriotic credentials, then built up military forces at the border.
___
Associated Press writer Thanyarat Doksone in Bangkok contributed to this report.
Posted by CAAI News Media at 9:19 am