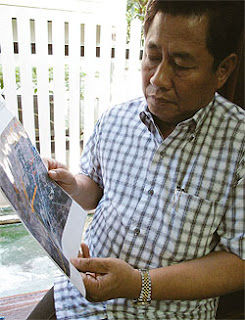 EVIDENCE: Lawyer Nataporn Toprayoon checks the map that the Cambodia court rejected to consider in the case. This will be forwarded to the International Criminal Court.
via CAAI


Published: 6/02/2011
The government failed to help the two Thais convicted in Cambodia of espionage, says their lawyer.
Nataporn Toprayoon, the legal adviser for Thai Patriots Network coordinator Veera Somkwamkid and his secretary, Ratree Pipatanapaiboon, said the government's response was disappointing, as it could have helped secure the release of the pair.
Promised documents failed to arrive, with government officials declining to help because the detained Thais are affiliated to the yellow shirt People's Alliance for Democracy, which is currently protesting against the administration.
A Cambodian court on Wednesday sentenced Mr Veera and Miss Ratree to eight years and six years in jail, respectively, for espionage.
Mr Nataporn said that without government help, the pair were left to the mercy of the Cambodian court, which cited a disputed map in saying they had trespassed.
It also refused to accept documents presented in their defence.
Prime Minister Abhisit Vejjajiva promised to send documents to aid their case, but they failed to arrive, he said.
"Since then the government has tried to persuade the pair to accept their guilt and ask for a royal pardon, which I think is just not right," said Mr Nataporn.
Seven Thais, including Democrat MP Panich Vikitsreth, were arrested on Dec 29 on disputed land at the border with Cambodia and charged with trespass.
They were detained at Cambodia's Prey Sar prison for nearly a month.
Five of the seven, including Mr Panich, have since been freed, after the court suspended their nine-month jail terms.
The other two, Mr Veera and Miss Ratree, are now held in Prey Sar prison, vowing to fight to the end.
Mr Nataporn talked to Piyaporn Wongruang about how he intends to fight their cases.
Q: Do you think the fresh round of fighting which has broken out near the border will affect their plight?
A: If the fighting has any impact, it will probably be positive. The international community is likely to take more notice of what is going on.
Q: How are you preparing your fight?
A: We have worked on two separate tracks _ submitting an appeal to a higher court within 30 days and working on filing the case with the International Criminal Court, which we place higher hopes in.
Q: Why are you filing a case to the ICC?
A: The case is really about a territorial dispute which the countries have been unable to settle.
As the area on which those people allegedly trespassed has not yet been proved to belong to either Thailand or Cambodia, the court should not have authority over the case.
But the court has already sentenced them, so I think the Cambodian government has violated international agreements.
Jailing them as a result of a legal interpretation by the court has violated their human rights.
Q: What happened to the court to prompt such a verdict?
A: The court did not accept any evidence concerning the pair which we filed to prove their innocence, claiming it was not official.
The court based its ruling on a map of the area [that Thailand disputes], and concluded that they had trespassed on Cambodian territory. It claimed they were in a military area.
But our aerial map suggests they were arrested 200m behind the alleged trespassing point.
Q: The court also convicted them of spying.
A: The court cited a camera carried by Ms Ratree, and Mr Veera's diaries in which he mentioned a pile of weapons he had found. It even alleged that Mr Veera had disguised himself as a mushroom collector to keep an eye on the Cambodians.
We provided 27 documents ranging from border treaties to the map. But the court refused to consider them.
Q: How did the government help?
A: The government did not help at all. I produced a letter asking for documents from Mr Abhisit about a week before the court's verdict.
The prime minister told agencies to provide us with the information we sought, but none arrived.
I was very disappointed. The government did not provide any documents to help us fight in court.
If we had received some help from the government, it would have not ended as poorly as it did.
I think it is about our mindsets towards each other. I contacted some officials about this matter, and they said: "You are the yellow shirts' lawyer, we won't talk to you."
Q: Will you ask them again for help?
A: I don't know what I should expect or who to talk to any more. We are lawyers and we just wish to get our people back without tarnishing reputations and assigning guilt. I don't understand why the government does not see things the way we do. Since [Mr Veera and Ms Ratree's convictions] the government has tried to persuade the pair to accept their guilt and ask for a royal pardon, which I think is not right. It is not just.
Q: How are their spirits?
A: Mr Veera is in strong spirits. He has not bowed to pressure because he is firm on the point that he was on Thai soil. He told me that he would fight to the end, even if he has to die there. They are in Prey Sar, home to about 2,000 prisoners. Visits are hard to secure as they need government approval, though his mother has visited him a few times.
Posted by CAAI News Media at 9:27 am