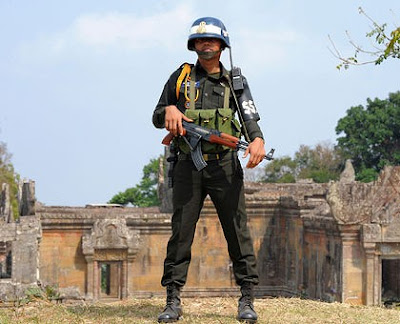 Tense ... a Cambodian soldier guards Preah Vihear temple. Photo: AFP
PHNOM PENH: Thai and Cambodian soldiers exchanged fire near an ancient temple on their border yesterday, hours after heavy clashes left a soldier and a civilian dead.
On Friday, a Cambodian soldier died in the skirmishes near the disputed Preah Vihear temple. A Thai soldier was captured yesterday.
A Thai villager was also killed by artillery shelling and five Thai soldiers were injured.
Advertisement: Story continues below Thailand and Cambodia accused each other of starting the fighting, the deadliest since April 2009, as the United States urged ''maximum restraint''.
The area around the 11th-century temple is claimed by both sides. Cambodian Foreign Ministry spokesman Koy Kuong said Phnom Penh planned to complain to the United Nations about what it called the ''Thai invasion''.
Thai soldiers had fired artillery shells 18 to 20 kilometres into Cambodian territory, he said.
But Thai Defence Minister Prawit Wongsuwon played down the significance of the incident, saying: ''We are negotiating now and I am sure that everything will be fine.''
A US State Department spokeswoman said: ''The United States urges both sides to exercise maximum restraint and take all necessary steps to reduce tensions and avoid further conflict.''
A Thai army official at the border said fighting broke out on Friday at Phu Makuea, near the temple. Residents of villages along both sides of the border were evacuated, officials said.
Ties between the countries have been strained since July 2008 by a series of deadly border clashes over land surrounding the temple after its UN World Heritage listing.
Thailand and Cambodia have both been talking tough on the border issue, which some observers say serves nationalist goals at home on both sides.
The International Court of Justice ruled in 1962 that Preah Vihear itself belonged to Cambodia, although its main entrance lies in Thailand. The boundary through the surrounding grounds remains in dispute.
The Thai-Cambodia border has never been fully demarcated, partly because it is littered with landmines from decades of war in Cambodia.
Another border spat has focused on the Keo Sikha Kiri Svara pagoda, which is built in the disputed area.
Thailand demanded last Monday that Cambodia remove its flag from the pagoda, which it said was ''situated on Thai territory'' - a claim Cambodia vehemently rejects.
The fighting erupted just hours after Thai Foreign Minister Kasit Piromya held talks with his counterpart in Cambodia.
Tension has worsened since the arrest of seven Thai nationals for illegal entry into Cambodia in late December. Five were given suspended sentences but nationalist activist Veera Somkwamkid and his secretary were sentenced to jail for spying, angering Thai nationalists.
Posted by CAAI News Media at 11:15 pm