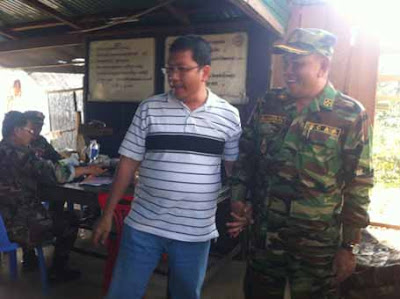 Soy Sopheap (L) posing with Gen. Chea Dara at his command post on top of the Preah Vihear hill.
http://khmerization.blogspot.com/


via CAAI
By Khmerization
Source: DAP News
Gen. Chea Dara, Deputy Commander-in-Chief of Royal Cambodian Armed Forces, has told Mr. Soy Sopheap, Bayon TV anchorman and publisher of DAP News, that in the 2 days of fighting, Cambodian troops had killed 32 Thai soldiers on the spots, caused injuries to many more and captured 5 Thai soldiers.
Armed clashes erupted between Cambodian and Thai troops at many locations near Preah Vihear temple at 3:15 p.m on Friday and lasted until 5:45 p.m. The clashes erupted again early this morning at 6:15 a.m near Preah Vihear temple and Phnom Trop, 5 kilometres east of Preah Vihear temple.
Soy Sopheap quoted Gen. Chea Dara as saying that Cambodian troops had killed 5 Thai soldiers at Sombok Khmum battlefield and 11 were killed at the Red House when it was destroyed by Cambodian artillery shells during the fighting yesterday and 4 Thai soldiers were captured. The fighting erupted again at 6:15 a.m this morning when 6 Thai soldiers were killed at Sombok Khmum, 7 were killed at the Red House and 3 were killed and one captured at the Phnom Trop battlefield.
On top of these, Cambodian troops had destroyed one artillery tow truck, destroyed 12 houses, one market, one petrol station, one water well and destroyed 4 buildings within the Red House compound. Other than these, he claimed that Cambodian troops had destroyed many Thai tanks and military positions.
On the Cambodian side, Wat Keo Sekha Kirisvarak pagoda and Preah Vihear temple had suffered significant damages by Thai 105, 130 and 150 milimetres shells. Thai artillery shelled the two places to open ways for Thai ground forces to move in to occupy the two temples, but they were repelled by experienced Cambodian troops, leaving the dead and the wounded behind. He said there were many international tourists visiting the temple at the time and Cambodian troops have protected them and evacuated them safely. But, unfortunately, one photographer was killed when Thai troops rained their machine guns on the Preah Vihear temple.
Gen. Chea Dara said, at this moment, the situations at Preah Vihear temple and the nearby military front lines are still very tense because Thailand had reinforced between 18,000-20,000 Thai troops to the areas. He added that Cambodian troops are on high alert at all time.
Neither Mr. Soy Sopheap nor Gen. Chea Dara had revealed the number of casualties on Cambodian side, which make their assessments and reports of the Thai casualties less credible.
Soy Sopheap's report and Gen. Chea Dara's alleged casualty figures of the Thai side seemed too high compared to the Thai claims and international news agencies' reports. Most international media reports quoted the number of deaths on the Thai side as one soldier and 2 civilian killed and about 4 soldiers wounded.
Posted by CAAI News Media at 12:25 am

Whatever Thais are trying to hide or change the story around to fit their interests, Khmers will prevale. Thai troops invsded Khmer territory and Khmers protected what is Khmers's.

I was recommended this web site by my cousin. I am not sure whether this
post is written by him as nobody else know such detailed about my problem.
You're wonderful! Thanks!