Thailand is cranking up pressure on Cambodia over the disputed Preah Vihear temple, even as a shaky ceasefire holds after the worst border fighting in two years claimed at least five lives. 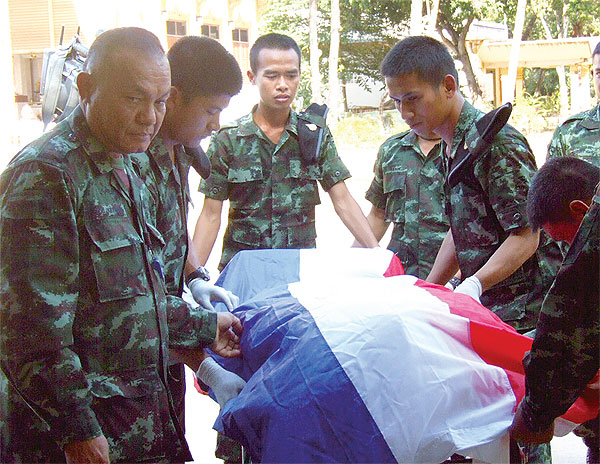 SOLDIER FALLS: The flag-draped body of Sgt Wutcharin Chartkhamdee, who was killed in the border clashes, arrives at Wat Siriwarawat in Si Sa Ket’s Kantharalak district.
The government reached a ceasefire with Cambodia yesterday after a resumption of border clashes in the morning killed one Thai soldier, taking the Thai toll to two.
Cambodia has said two of its soldiers and one civilian were killed when fighting broke out on Friday, while Thailand said a villager on its side of the border also died.
The resumption of fighting has sent thousands of people living near the border fleeing for safety, and villagers on both sides have been evacuated.
As Cambodia yesterday released four Thai rangers seized when the clashes broke out on Friday, reports emerged that the Preah Vihear temple may have been damaged. 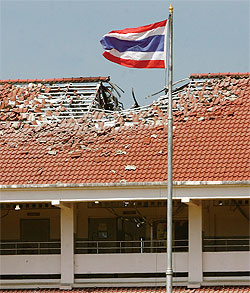 SCHOOL CLOSED: The roof of a school in Si Sa Ket damaged by shells allegedly fired by Cambodian troops.
Television footage showed smoke plumes rising near the temple, which according to Cambodia suffered "serious" damage in the fighting.
Both sides are now taking their case to international tribunals, which could further ratchet up tension along the border.
Prime Minister Abhisit Vejjajiva said yesterday the government would seek the suspension of Preah Vihear temple's listing as a Unesco World Heritage site following the flare-up.
The government would also submit a letter to the United Nations Security Council "clarifying" the border clashes.
"I'm asking Thais to support the armed forces in protecting the country's sovereignty," he said, adding that the army would never invade its neighbour.
In Bangkok, a few thousand supporters of the People's Alliance for Democracy gathered near Government House calling on the government to resign for its handling of the Cambodia issue.
Mr Abhisit said the clashes show the border issue is sensitive and any move which could exacerbate tensions should be avoided.
Unesco's World Heritage Committee is scheduled to consider the temple's world heritage listing plan, and a development plan for the surrounding area, at a June meeting in Bahrain.
The prime minister conveyed his condolences to the families of the clash victims and said Thai soldiers were simply defending the country's sovereignty after Cambodian troops opened fire on a Thai military base in the Phu Ma Khua area of Si Sa Ket on Friday.
The renewed gunfire yesterday morning killed one soldier and wounded four others. An exchange of heavy artillery shelling on Friday afternoon left one Thai villager dead and scores of troops injured.
Thai soldiers said the morning clash took place near Huay Ta Maria village when Cambodian forces advanced towards the village and opened fire.
Thai troops retaliated and fighting broke out at two nearby locations of Ban Don-aow pass and a former border patrol base near Pha Mor E-dang.
Army spokesman Sansern Kaewkamnerd said the renewed fighting killed Sgt Wutcharin Chartkhamdee and left four other soldiers injured.
"We held onto our positions. When Cambodian troops advanced to occupy them, fighting was inevitable," he said.
Second Army commander Lt Thawatchai Samutsakhon led a delegation to meet Cambodia's Military Region 4 commander Lt Gen Chea Mon.
Following the three-hour talks, both sides agreed to stop firing, not to increase their forces in the disputed area, and improve coordination between unit commanders.
Foreign Minister Kasit Piromya briefed foreign diplomats from 16 countries, after his ministry on Friday said Cambodian troops opened fire from the Preah Vihear temple area at the Thai military, and Phum Saron village.
Cambodian Foreign Minister Hor Namhong has written to the United Nations to draw its attention to the "explosive situation at the border".
In a letter to UN Security Council president Maria Luiza Ribeiro Viotti, he said Cambodian troops had no option but to retaliate in response to "flagrant aggression" by Thai troops.
Col Sansern yesterday admitted the army had reinforced troops and artillery at the border.
Meanwhile, Unesco director-general Irina Bokova expressed her deep concern at the sudden escalation of border tensions.
She called upon both sides to exercise restraint for the sake of the temple and to talk at the highest levels to defuse the tension.
Posted by CAAI News Media at 9:34 am