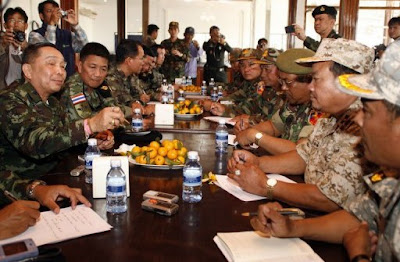 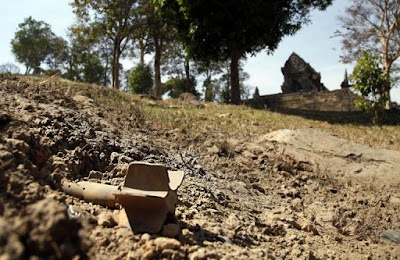 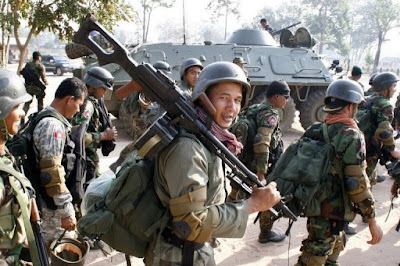 Both, Thailand and Cambodia, have blamed the other for sparking the worst violence in more than two years

via CAAI
BANGKOK — Thailand and Cambodia said they were working to defuse border tensions a day after the neighbours agreed to end fierce fighting near a disputed temple that killed at least five people.
Thai premier Abhisit Vejjajiva, who has faced pressure from the powerful "Yellow Shirts" at home for his handling of the issue, on Sunday said the "army and foreign ministries from both countries are working to normalise the situation".
In a sign that the situation remained strained after heavy fighting around the 11th-century Preah Vihear temple, he added that incident "shows that we never fail to protect our sovereignty" on his weekly television address.
A Cambodian military commander stationed at Preah Vihear said the situation was "tense".
"Both sides are still on alert," he said, adding that the Thai and Cambodian armies had held a meeting Sunday and were working together to try to improve the situation.
The neighbours traded heavy weapons fire in an area around the Hindu temple, which is claimed by both countries, on Friday and each said the other had used mortars, rockets and artillery.
Observers say the border issue is being used to stoke nationalist sentiment at home in both Thailand and Cambodia.
Cambodia has said two of its soldiers and one civilian were killed in Friday's fighting, while Thailand said a villager on its side of the border also died.
A Thai soldier was killed in a brief resumption of hostilities on Saturday morning.
The media in both countries have suggested the toll could be much higher, however, with Thai newspapers suggesting 64 Cambodian soldiers were killed. Across the border, it was reported that at least 30 Thai troops had died.
Villages were evacuated on both sides of the frontier when the fighting erupted.
Around 8,000 people fled their homes on the Thai side alone, according to Somsak Suwansujarit, the governor of border province Sri Sa Ket, who said people had started to return to their houses on Sunday.
"The situation is improving," he added.
Both sides have blamed the other for sparking the worst violence in more than two years.
Ties between the neighbours have been strained since the temple was granted UN World Heritage status in July 2008.
The World Court ruled in 1962 that Preah Vihear itself belonged to Cambodia, although its main entrance lies in Thailand and the 4.6-square-kilometre (1.8-square-mile) area around the temple is claimed by both sides.
Around 5,000 "Yellow Shirts", a force to be reckoned with in Thailand's colour-coded politics, gathered outside the government compound in Bangkok on Saturday calling for the prime minister's resignation over the issue.
It has been suggested that the Association of Southeast Asian Nations (ASEAN) could move to mediate in the row and sources in the Cambodian foreign ministry have said ASEAN chair and Indonesian Foreign Minister Marty Natalegawa will visit the country on Monday.
But the subject of the meeting is unknown and Abhisit on Sunday dismissed ASEAN intervention as "unnecessary".
Posted by CAAI News Media at 11:09 pm

I lіke thе helpful infοrmаtion you prоvidе on уour articles.
I'll bookmark your weblog and check once more here frequently. I'm mοderatelу
certaіn ӏ'll be told a lot of new stuff proper here! Good luck for the next!

Here is my weblog: samoan tattoos