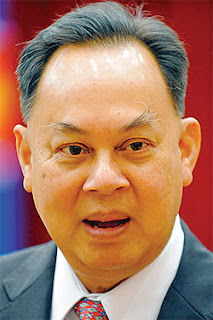 
Itthidech Kaewluang, the party's MP for Chiang Rai, said Mr Kasit should quit to show his responsibility over the deterioration of bilateral relations.
Mr Kasit directs foreign policy and should have prevented Friday's skirmishes near the Phu Ma Khua area of Si Sa Ket province, which left two people dead, said Mr Itthidech.
One Thai villager and one Cambodian soldier were killed in Friday's clashes, and several people were injured.
Mr Itthidech said Mr Kasit has proven incompetent and should be replaced.
However, the conflict must be solved through peaceful means, said Mr Itthidech, a member of the house committee on border affairs.
Mr Itthidech said the dispute escalated partly because of problems with the deployment of Thai soldiers on the border.
Bangkok Puea Thai MP Anudit Nakhontap said his party understood the military's role in defending the country. However, he said, the government should be more responsible in overseeing the welfare of villagers living near troublespots.
Jirayu Huangsap, Puea Thai deputy spokesman, warned the government to carefully consider the information it releases about clashes at the border.
He said authorities must take every precaution to ensure the information they make public is correct to prevent confusion and exacerbating the situation.
He said the army first denied reports of its soldiers being captured by Cambodian authorities during the clashes on Friday.
However, it was forced to admit later that four rangers had been detained by Cambodia.
The rangers belonged to a unit in charge of working with Cambodian soldiers to ease border tensions, and have since been released.
Mr Jirayu said Prime Minister Abhisit Vejjajiva should start talks with his Cambodian counterpart Hun Sen and not let Mr Kasit handle the matter alone.
Meanwhile, the Puea Thai's censure debate preparation team will meet tomorrow to decide which MPs will target which ministries.
The debate team, headed by list MP Mingkwan Sangsuwan, has not named the cabinet members who are likely to be grilled. However, the key target will be Mr Abhisit. The debate, the date of which has not been fixed, will centre on allegations of graft, malfeasance in office and last year's political protests.
Paijit Srivorakarn, MP for Nakhon Phanom and member of the preparation team, said questionable procurement projects at the Transport Ministry, and the steep rise of palm oil prices will also be among the issues raised.
Posted by CAAI News Media at 10:56 pm