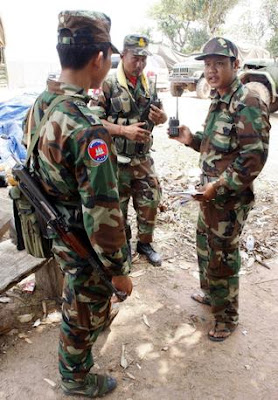 In this photo released by China's Xinhua News Agency, troops of Cambodian Royal Armed Forces confer at a military camp in the border disputed area in Oddar Meanchey province, Cambodia. File photo
http://www.thehindu.com/
via CAAI
Cambodia has asked the United Nations’ highest court to order Thailand to withdraw troops and halt military activity around a temple at the centre of a decades-old border dispute that has flared into deadly military clashes.

Fighting in recent weeks along the disputed border region surrounding the Preah Vihear temple has left at least 16 people dead.

In a request filed April 28 and made available Tuesday on the court’s website, Cambodia asks International Court of Justice judges to urgently deal with its request “because of the gravity of the situation.”

Cambodia claims that according to a 1962 ruling by the court the temple on its territory.
Posted by CAAI News Media at 9:23 am