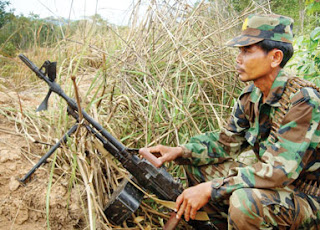 Photo by: Reuters
A Cambodian soldier mans a position with his weapon in Oddar Meanchey province, near the Thai-Cambodian border, on Sunday.
http://www.phnompenhpost.com/


via CAAI
Tuesday, 03 May 2011 15:03Cheang Sokha
As sporadic fire at the Cambodian-Thai border continued for an 11th straight day yesterday, thousands of evacuees displaced in the conflict began to venture back to their homes.
Cambodia’s Ministry of Defence said in a statement yesterday that Thai troops had fired machine guns, grenade launchers and shells on the frontline near Oddar Meanchey province on both Sunday night and yesterday morning.
Renewed fighting near to Ta Moan and Ta Krabey temples came despite a ceasefire brokered by military commanders last Thursday and renewed twice since.
At least nine Cambodian troops have been killed since the fighting broke out on April 22. In Thailand, seven troops and one civilian are dead.
“Thai soldiers have not obeyed the ceasefire agreement and this is the 11th time that Thai troops violated the agreement,” the ministry statement said.
Soldiers on the frontline also reported continued exchange of fire. One Cambodian solider, who wished not be named, said yesterday: “I cannot sleep each night … they want to disturb us, though sometimes we shoot back at them and they cannot sleep either.”
In a now familiar scenario, each side accused the other of touching off the fighting.
Veerachon Sukondhadhpatipak, deputy spokesman of the Royal Thai Army, said yesterday: “The two sides say the same thing and accuse people of doing the same thing.”
He said added that Thai troops were choosing to fire “warning shots” after any suspicious movements, rather than aiming to hit Cambodian soliders. He added that Thai soldiers would only act in “self-defence”.
Meanwhile, the tide of evacuees moving away from the border – over 45,000 on the Cambodian side as of this weekend – appears to have turned as the intensity of the fighting dies down.
Keo Vy, cabinet director of the National Committee for Disaster Management, said late last night that over 9,000 families had returned home from shelters in Oddar Meanchey – the majority to houses farther away from the frontline.
“They can return whenever they think it is safe for them,” he said. “Even though they stay here [in Samroang town] and get rice and food from the Red Cross, they still want to return to their homes where is comfortable for them to live.”
Roughly 1,000 families, he added, had chosen to stay put at shelters in the meantime.
ADDITIONAL REPORTING BY SAM RITH AND JAMES O’TOOLE
Posted by CAAI News Media at 12:15 am