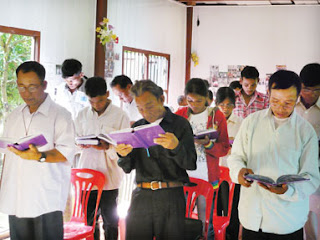 Photo by: Sun Narin
Parishioners at a service in Battambang’s Samlot district.
http://www.phnompenhpost.com/


Tuesday, 03 May 2011 15:03 Sun Narin
Battambang province
Last week, investigating judges at the Khmer Rouge tribunal announced that they had concluded investigations in the court’s controversial third case.
Despite the gravity of the crimes the court is tasked with investigating, many observers believe judges have no intention of taking this case – which has run into opposition from Prime Minister Hun Sen and other officials – to trial.
Battambang province’s Samlot district was one of the last redoubts for the Khmer Rouge insurgency, and remains home for former KR navy commander Meas Muth and many other former cadres. The area would be an obvious starting point should the tribunal choose to make arrests in its final cases, but whatever the outcome of these investigations, many Samlot residents are more concerned with judgment of a different sort.
“I want God to forgive what I did during the regime,” said former Khmer Rouge member Mann Man, 50.
“I want my soul to be open and laid to rest by God.”
Mann Man is one of a small community of Christians in Samlot’s Ta Sanh and Meanchey communes, areas largely populated by ex-Khmer Rouge. Around 300 converted Christians currently worship at the six churches in the two communes, among a population of roughly 10,000.
Sang Horn, a former Khmer Rouge soldier who now serves as pastor at Ta Sanh’s O’Sngout village, said Christianity’s theology of redemption had proven appealing to many ex-KR members seeking to leave behind their role in the Kingdom’s Communist nightmare.
“If they confess their sins to God, God will polish their souls and they will have new life,” he said. “If they really believe in and follow God, God will forgive them.”
Sang Horn’s colleague, San Timothy, served as pastor to the area’s most famous convert, former Tuol Sleng prison chief Kaing Guek Eav. The infamous jailer, better known as Duch, became a born-again Christian and had been living for years under an assumed name in Samlot when he was arrested in 1999.
During Duch’s trial at the Khmer Rouge tribunal in 2009, Cambodian-American Christopher Lapel appeared to testify after being summoned by the defence. Lapel was another former pastor of Duch’s and was responsible for bringing Christianity to many other former cadres in the area, Sang Horn said.
Duch repeatedly said he accepted responsibility for his crimes and hoped to be forgiven. However, he ultimately chose to appeal his 30-year jail term and is currently seeking acquittal, claiming he was only a mid-level official following orders from above.
The penitence of other ex-Khmer Rouge members appears more genuine. Mann Man said she had been in charge of supervising people working in a rice field and hoped to be forgiven for the zeal with which she approached her work.
“I ordered them to do heavy labour quickly and without stopping. This was a bad deed,” she said. “I feel pity for them and I should not have done that.”
Sim Sun, 42, a former KR soldier, said he prayed to be forgiven for killing troops from the opposing Lon Nol and Vietnamese armies in battle.
“I want God to forgive me and guide me in both this life and the next,” he said.
ADDITIONAL REPORTING BY VENG RACHANA
Posted by CAAI News Media at 12:01 am