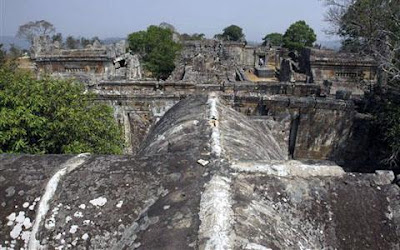 Photo: AP
An overview of Cambodia's 11th century Hindu Preah Vihear temple, about 245 kilometers (152 miles) north of Phnom Penh, Cambodia.
“It will be an oral hearing, and it can be between a few days and a few weeks.”
The International Court of Justice is likely to hold a hearing on the Preah Vihear temple issue in a matter of weeks, an official there told VOA Khmer Tuesday.
Cambodia has petitioned the court to re-interpret a 1962 decision that gave Preah Vihear temple to Cambodia but left both Thailand and Cambodia claiming adjacent land.
Cambodia hopes a hearing will clarify the decision, which officials here say should include the land. Both sides claim a 4.6-kilometer stretch of land near the temple.
The disputed land has been at the center of a military standoff since 2008 that has killed dozens of people in a series of skirmishes over the years, including the deadliest clashes over the last week and a half. At least 18 have died in fighting that began April 22.
On April 28, Cambodia filed a request to the international court to clarify its 1962 decision, requesting “urgent” action to protect Preah Vihear temple, as Cambodian and Thai troops exchanged rocket and artillery fire along the border.
Biris Heim, a spokesman for the International Court of Justice, said the court will now “fix a date with all parties” so that they can appear before the court with arguments.
“It will be an oral hearing, and it can be between a few days and a few weeks,” he said.
Both Cambodia and Thailand have been notified of the case, he said, but the court will not send investigators to the field.
“Parties will provide evidence,” he said. “The court can only make an interpretation by hearing from both sides.”
Thailand, meanwhile, has begun preparing a group of experts to respond to the court, according to Thai media.
Posted by CAAI News Media at 9:18 am