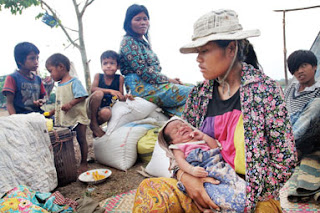 
Tuesday, 03 May 2011 15:02Cheang Sokha
Oddar Meanchey province
Like thousands of villagers living on the Cambodian-Thai border, mother-of-two Chum Mom took her children and ran for her life as shells landed near her home in Pha Ong village in Oddar Meanchey’s Konkriel commune last week.
Clutching her 10-day-old baby and two-year-old son, she had no time to gather any possessions as the conflict centring around Ta Moan and Ta Krabey temples forced her to seek shelter some 50 kilometres away at Samroang pagoda in Samroang town one week ago today.
Faced with living under a canvas as the fighting continues, after the fragile ceasefire brokered last Thursday failed, the health of her children has begun playing on the 23-year-old’s mind.
“My husband is working as a labourer in Thailand and he doesn’t know that we fled home for this site,” Chum Mom said last week, while breast-feeding her baby under an old tent near a tree in the pagoda grounds.
“I miss home and I am concerned about the health of my children. I didn’t bring anything along with me.”
Chum Mom is not alone. Not only are her seven siblings and mother staying in Samroang, but thousands of Cambodians are facing similar conditions with little respite in sight.
Uy Sam Ath, director of the disaster management department of the Cambodian Red Cross, an organisation which claims it takes care of displaced people across the province, estimated last week that 45,232 people were sheltering in 13 camps.
While some families have returned home after a seeing a lull in violence following fierce fighting last week, it is still too dangerous for many others – especially those living in Banteay Ampil district – to go home.
Health problems are proving a major concern for displaced villagers, living in temporary shelters that sometimes lack clean water sources and adequate latrines.
Reports have surfaced of evacuees drinking unboiled water from ponds – causing diarrhoea, coughing and fever.
Khim Thy, a nurse at Chong Kal Health Centre near to Samroang, said that more than 60 children fainted last week due to the high temperatures experienced in the tents and dehidration due to a lack of clean drinking water.
“They have now recovered after receiving treatment,” Khim Thy said yesterday.
“We have continued to explain to people to concentrate on ensuring sanitation in order to avoid disease.”
Dr Nima Asgari, public health specialist at the World Health Organisation, said yesterday that Health Ministry officials are investigating reported outbreaks of diarrhoea and vomiting in some evacuee camps.
“Short term-wise, the issueis much more about outbreaks of communicable diseases, such as respiratory infection, diarrhoea, measles ... and that’s because you’re actually cramping people into a tight area and giving them less access to adequate toilet facilities or adequate water and sanitation,” Dr Asgari said.
He said that children up to the age of 14 were also being immunised against diseases like polio and measles and pregnant women were receiving tetanus vaccinations.
“There could be nutritional issues for pregnant women [and] for children,” he added.
Minister of Health Mam Bunheng said yesterday said that displaced villagers had so far primarily suffered from fevers, adding that the outbreaks were not serious.
“In the last two days we have injected women and children with vaccines.... We have also provided the villagers with mosquito nets and some medicine for their daily use after they fell sick,” he said. 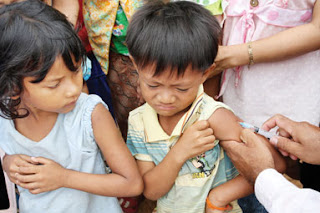 Photo by: Sovan Philong
Children, displaced from their homes near the Thai-Cambodian border, who are temporarily staying at Samroang pagoda in Samroang town, receive vaccinations for polio and measles last week.
Mam Bunheng added that the ministry had sent about 25 officials to assist the provincial health department.
While non-profit organisations are providing food and shelter for villagers, many evacuees are concerned that a long period of time away from home could affect their ability to care for crops and cause future food shortages in the area.
Phem Ears, 64, an evacuee from Kork Kpos village in Kokmon commune, is staying in a make-shift camp with 1,400 families at O’Russei Primary School, Samroang district.
“If they continue fighting we cannot do any farming,” he said, while sitting on a hammock inside a tent. “We want to go back home but cannot now ... we don’t want to see such war happen, we experienced war during the Khmer Rouge period.”
Math Norath, 60, a displaced villager from Tonsay Reak commune of Banteay Ampil district, expressed similar concerns while feeding her three grandchildren fried rice with her hands, as eating utensiles seem to have not been provided.
“I don’t know what will happen next,” she said.
“If we cannot go back soon we will miss the farming season and we will have no food to eat next year.”
The children’s education is also suffering. The villages on the road heading to Ta Moam temple in Banteay Ampil district are quiet, the houses are locked and the schools are closed after bombs were dropped nearby.
Kim Nol, a teacher at Saroang Primary School, which previously had 1,200 students, said late last week that the school had closed for more than a week in fear of the nearby violence.
“The parents don’t allow their children to come to study. I think this is because of security reasons,” Kim Nol said in the quiet school compound, where just a few children were left playing in a nearby field.
At Ta Moan temple, soldiers also are in the dark about when the continued skirmishes will end.
On Sunday, frontline military commanders from Cambodia and Thailand met again in an attempt to ease tensions and renew peace along the border.
But soldier Reurn Heng, who said that the situation had calmed since last week, said: “Meetings help to ease the tension but we are still prepared [for violence].”
ADDITIONAL REPORTING BY MARY KOZLOVSKI
Posted by CAAI News Media at 12:19 am