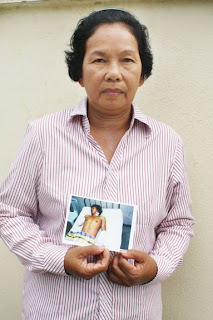 Photo by: Kenneth Ingram
Hem Chamroeun, 60, holds a picture of her son Uy Bunnarith, whose arms were cut off by another man, Roeun Sothun, during an altercation in July 2009.
http://www.phnompenhpost.com/


via CAAI
Tuesday, 03 May 2011 15:03Buth Reaksmey Kongkea and Kenneth Ingram
A young man whose arms were severed in a samurai sword attack two years ago rejected a surgical procedure yesterday that may have allowed him to regain partial use of his left arm.
Uy Bunnarith and his 60-year-old mother, Hem Chamroeun, travelled last week from Battambang province to meet with doctors at the Children’s Surgical Centre in Phnom Penh after being featured in The Post.
The 25-year-old lost his arms in 2009 when teenager Reun Sothun attacked him with a sword while Uy Bunnarith was investigating a noise near his home. Reun Sothun was sentenced to 13 years in prison and ordered to pay 20 million riel [about US$5,000] in compensation for the crime last month.
Chief Executive Officer of the Children’s Surgical Centre, Jim Gollogly, 67, said yesterday that the centre invited the family to discuss options for Uy Bunnarith’s rehabilitation. “I read the story and I said to some of my staff: ‘Get a hold of that guy’,” he explained.
Gollogly, who has 14 years of experience at the NGO, said that artificial limbs do not work as well as many people seem to think, which is why the doctor recommended a surgical technique known as the Krukenberg procedure, developed by a German surgeon in World War One. The procedure separates two bones in the forearm, the ulna and radius, allowing the patient to develop an improvised pincer from what was previously a stump. Gollogly said that Uy Bunnarith’s right arm was not eligible for the surgery because there was damage above the elbow, but added that his left arm was suitable.
“We generally perform half a dozen of these procedures each year at the centre,” said Gollogly. He added that the staff tries to have a former patient who underwent the same surgery available at the clinic to speak with candidates, but that this option was not possible last week.
Uy Bunnarith and his mother were asked to consider the treatment over the weekend and the surgery was booked for yesterday morning, at which time they decided to reject the proposal.
Sam Sitha, Smile Train Coordinator of the Children’s Surgical Centre, said their decision to opt out of the surgery came as a surprise to the staff.
“We really pity him because he’s lost both arms and we wanted to help, free of charge, but he has refused it. We cannot force him to get [the treatment] because this is his right. At this time we will wait and look forward to helping him if he needs our help,” he added.
Uy Bunnarith, who was contacted by phone, said that the reason he chose to refuse treatment was because he was afraid of the operation, explaining that the surgical procedure would make his arms shorter in the future.
“I am grateful for the help offered by the Children’s Surgical Centre, for its kindness and generosity towards me, but I cannot follow through with the operation,” he said.
“I am afraid because my arms will become shorter and I’m afraid of how that could limit me after the operation.”
“Alternatively, I am still very scared when I see doctors and think about operations. I remain fearful about the event that led to my arms being cut. I’m not optimistic that I’ll be able to write or work by myself even if I get the operation,” he added.
Mother Hem Chamroeun said that her son was still very frightened about his arms being cut, following his experience during the attack and his subsequent hospital treatment.
“I have so much pity for my son. I really wanted him to get the operation so he can help himself, but I cannot force him if he dislikes it,” she said
“I will still persuade him to get the operation and I hope that he will change his mind in the future.”
Posted by CAAI News Media at 12:06 am