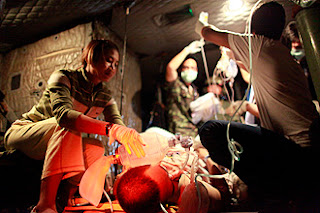 Thai nurses treat a wounded soldier inside a helicopter on the arrival at the compound of a hospital in Surin province, northeastern Thailand, Saturday, April 30, 2011. -- PHOTO: AP
http://www.straitstimes.com/


May 3, 2011
BANGKOK - A THAI soldier was killed in fresh fighting with Cambodian troops, the army said on Tuesday, raising the death toll from the worst border clashes in decades to 18, despite some signs of easing tensions.
Three more Thai troops were wounded in the skirmishes late on Monday and early Tuesday, said Colonel Sukit Subanjui, a Thai army spokesman in the north-east border region.
'Both rounds of fighting involved assault rifles and mortars,' he said.
Despite the continued sporadic clashes, the situation had improved enough on Monday for many of the 85,000 civilians who had sought refuge in temporary camps or temples on both sides to return home, authorities said.
Eight Thai troops and nine Cambodian soldiers have died since April 22 in the conflict around two disputed temples on the border. Bangkok has said a Thai civilian was also killed and some homes were damaged on both sides.
An attempted truce announced on Thursday after military-level negotiations proved short-lived, but the fighting has since become less intense and appears to be confined to a smaller area away from civilian populations. --  AFP
Posted by CAAI News Media at 12:44 am