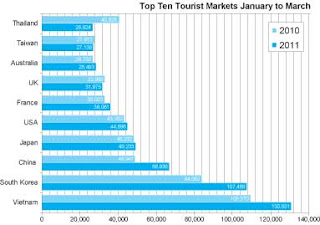 
via CAAI
Wednesday, 04 May 2011 15:00 Soeun Say
Japanese tourists to the Kingdom rose in the first quarter compared year on year despite the massive earthquake and tsunami that hit the island nation in March, Cambodia’s Ministry of Tourism said yesterday, while continued fighting kept Thai visitors away.
The total number of foreign tourists between January and March increased 14 percent year-over-year to about 778,000, with Japanese visitors climbing 2.1 percent to just over 49,000, according to Ministry statistics.
Tourism Minister Thong Khon said that given the strong Japanese numbers – and the country’s status as the second-largest point of departure to the ASEAN region – local tour and travel operators should continue to market to Japan going forward.
“Japanese tourists are the main target that we must attract, and we hope that through our promotions more and more of them will visit this year,” he said.
He called on Japanese companies to invest in Cambodia, such as through direct flights between the two countries.
Thong Khon also said he hoped the Kingdom’s tourism sector would grow this year as a result of new flights from Europe, as well as other charter flights here, and visa exemptions with ASEAN countries.
Thai tourists should not be worried about visiting Cambodia, he added.
Ang Kim Eang, President of the Cambodian Association of Travel Agents, agreed that these would be the factors to boost tourism and said he was “optimistic” that visitor numbers would continue to rise as a result.
President of the Cambodia Hotel Association Luu Meng explained that occupancy rates were up in the first quarter year-over-year as well, saying that Japanese and Americans are increasingly spending more and more time in Cambodia.
Posted by CAAI News Media at 11:59 pm

This could cause them to grow less, flower less, and maybe even die.
Owning a regular lawn mower does not mean you have to give up on mulching your yard; you just have to be willing to do some
work. This same person spread several yards of the mulch around their house before
they realized the problem, and it ruined many of their plants.

Quality content is the crucial to invite the users to pay a quick visit the site, that's
what this web site is providing.