"I will lead a senior Cambodian delegation to join the swearing-in ceremony of the newly-elected South Korean president on February 24," he told a school inauguration ceremony in Kampong Speu province.

I will take the chance to ask for more aid from the South Korean side for our country, he was quoted by national television as saying.

"The newly elected president is my former economic advisor," said Hun Sen, adding that he will invite him to visit Phnom Penh soon.

South Korea surpassed China in 2006 to become the largest investing country for Cambodia.

Editor: Du Guodong
Posted by CAAI News Media at 8:27 am No comments:

Earlier, on Feb. 3, the Vietnamese Embassy in Bangladesh organised a get-together to welcome the nation’s biggest traditional Lunar New Year (Tet) festival in the presence of overseas Vietnamese and local officials.

On the same day, thousands of overseas Vietnamese in Germany gathered at a meeting that was held in Magdeburg city of Germany’s Sachsen Anhalt State on the occasion of the Lunar New Year.

Addressing the get-together, Vietnamese Ambassador Tran Duc Mau spoke highly of the activities of the Overseas Vietnamese Association and other associations in the State in teaching native language for young Vietnamese generations and helping them to understand the nation’s traditions and cultural values.

Also on the day, the Vietnamese Embassy in Panama hosted a meeting for the embassy staff, overseas Vietnamese, Vietnamese students and workers for the same purpose.

On Feb. 2, the Vietnamese Embassy in the Netherlands organised a meeting for the embassy staff and overseas Vietnamese and Vietnamese students in the country to celebrate Tet.

Vietnamese Ambassador Ha Huy Thong took the occasion to hand over the certificates of merit of the Vietnamese Foreign Ministry of three Vietnamese in the Netherlands for their contributions to the homeland over the past year. 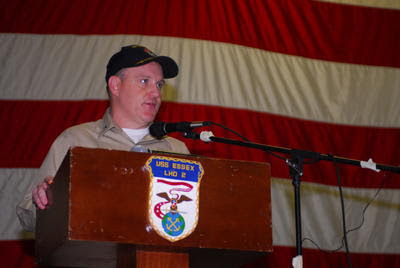 Capt. Brent Canady assumes command of the forward-deployed amphibious assault ship USS Essex (LHD 2) during a change of command ceremony. Essex change of command happened just prior to the kick-off for Super Bowl XLII. Essex is the lead ship of the only forward-deployed U.S. Expeditionary Strike Group and serves as the flagship for CTF 76, the Navy's only forward-deployed amphibious force commander. Task Force 76 is headquartered at White Beach Naval Facility, Okinawa, Japan, with a detachment in Sasebo, Japan.(Navy photo by Mass Comm. Specialist 2nd Class Mark R. Alvarez)

The change-of-command ceremony took place in the ship's hangar bay right before the live broadcast of the Super Bowl. It was already Monday at the ship's location.

Prior to turning over command to Canady, Donegan told the crew it was a privilege for him to have been part of the Essex winning team.

Today is the day in the minds of Americans that we identify champions. I believe that you are and have proven over and over again that you are champions; you are a championship team," said Donegan.

"Throughout the area of responsibility you have earned a reputation that is significant and enduring. You've earned a reputation through your actions and have displayed the attributes of a championship team. Like true champions you set the standards while others try to meet your standards; few succeed and that's the hallmark of champions," he added. "And you've done that in every single endeavor across the spectrum. On one hand you excel and set the standard for promoting peace and strategic partnership throughout the Pacific and on the other hand you have set the standard for preparing for combat."

Donegan assumed command of Essex in August 2006. Under his leadership, the ship participated in numerous joint and multi-national amphibious exercises in the Pacific area of operations, which included the second visit to the Kingdom of Cambodia by a U.S. Navy vessel in more than 30 years.

Canady reported to Essex as executive officer in August 2006. This is his first tour as a commanding officer of a naval vessel.

"Today it is truly my honor and privilege to become the commanding officer of this great warship," Canady told the crew after assuming command.

He thanked Donegan for his leadership and guidance over the past 18 months and for providing a perfect situation for an aviator "fleeting up" to command.

A native of Shelbyville, Canady graduated from the United States Naval Academy in 1984 with a Bachelor of Science, majoring in Economics.

Designated as a naval aviator in April 1986, Canady's tours have included three other ships including USS Coral Sea (CV 43), USS Nashville (LPD 13), and USS Theodore Roosevelt (CVN 71), as well as serving in numerous Helicopter Anti-submarine (HS) squadrons and commanding the Dragonslayers of HS-11 from 2001 to 2002.

Essex departed Sasebo, Japan on Jan. 24 for its spring patrol throughout the Western Pacific region.
During spring patrol Essex will participate in a series of bilateral maritime training exercises designed to build relationships and enhance operational readiness of partner Asian-Pacific nations. Essex will continue to make a positive difference in the Western Pacific through continued friendship building engagements, while remaining a vigilant force for security, stability and prosperity.
Posted by CAAI News Media at 8:13 am No comments: 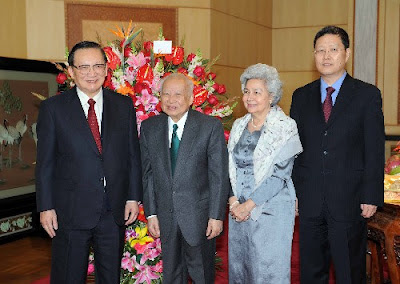 BEIJING, Feb. 4 (Xinhua) -- Chinese State Councilor Tang Jiaxuan visited former Cambodian King Norodom Sihanouk on Monday, before the upcoming Chinese lunar new year.
Tang conveyed the new year greetings from Chinese President Hu Jintao and Premier Wen Jiabao, and praised Sihanouk's historic contributions to promoting China-Cambodia friendship.
This year marks the 50th anniversary of the establishment of bilateral diplomatic relations and is a Year of China-Cambodia Friendship. China was ready to work with Cambodia to grasp this opportunity to advance the all-round cooperative partnership, and to pass on the traditional friendship from generation to generation," Tang said.
Sihanouk said Cambodia would as always hold friendly policies to China and adhere to one-China policy, and would make efforts to cement and promote the traditional good-neighborly friendship with China.
Sihanouk has made donations to China for disasters relief in snow stricken areas, and Tang expressed thanks for it.
Sihanouk told Tang he believed the Chinese people would definitely win the fight against the heavy snow.
Posted by CAAI News Media at 8:01 am No comments:

Tribunal spokesman Reach Sambath confirmed that Ieng Sary, who has a history of heart trouble, was being treated in a hospital. The spokesman declined to discuss any details.
Posted by CAAI News Media at 7:59 am No comments:

A former Khmer Rouge leader demanded "international standards" of justice in his first appearance before Cambodia's UN-backed genocide tribunal Monday, but the hearing on his appeal for bail was adjourned after his lawyer asked for a delay.

Nuon Chea, the Khmer Rouge's former ideologist, has been detained since September 19 on charges of war crimes and crimes against humanity for his involvement in the group's brutal 1975-79 rule, which caused the deaths of an estimated 1.7 million people.

Nuon Chea's Cambodian lawyer, Son Arun, asked the court to postpone the hearing so a foreign lawyer could join him in appealing for his client to be released from pre-trial detention, claiming the tribunal's investigating judges did not have sufficient grounds to detain him.

Dressed in a long-sleeved, checkered gray shirt, the 81-year-old Nuon Chea stood up to address the judges. He demanded "international standard" treatment of his case, saying it would be unfair to him if the proceeding went ahead without the full participation of both his Cambodian and foreign lawyers.

He said his Cambodian lawyer alone could not adequately make his appeal.

"I need to have two lawyers according to the law of this tribunal," Nuon Chea said, appearing firm and composed.

Prak Kimsan, head of the five-judge panel, adjourned the hearing and gave the defense until Wednesday to explain how much time they needed.

The judges took into account Nuon Chea's "basic right" to have Cambodian and foreign lawyers in deciding to postpone the hearing, Prak Kimsan said, ordering security personnel to take the defendant back to his cell.

Robert Petit, a co-prosecutor of the tribunal, said the adjournment was "regrettable," but that it would not have any impact on the investigation or change the fact that "Nuon Chea stays where he is at"—behind bars pending trial.

Nuon Chea's Dutch lawyer, Michiel Pestman, was absent, with his countryman, Victor Koppe, standing in for him.

Koppe attended the hearing but did not have the right to speak during the proceedings. Cambodia's bar association last week refused to swear him in because he had breached its rules by acting as a defense lawyer before taking an oath.

The tribunal says detention is necessary to prevent him from pressuring witnesses, destroying evidence and escaping. The judges said Nuon Chea's own safety could also be at risk if he was released.

Nuon Chea has denied any guilt, saying he is not a "cruel" man. He has also called himself "a patriot and not a coward" trying to run away.

"He deserves to be locked up because of his sin. His revolution killed so many people like animals," said Sok Suor, 68, who was among 400 people attending the hearing. She said her husband was executed and her son died from illness under Khmer Rouge rule.

In December, the pretrial chamber judges ruled against a similar appeal for release by Kaing Guek Eav, also known as Duch, who headed the Khmer Rouge's notorious S-21 prison and torture center.
Posted by CAAI News Media at 7:57 am No comments: