The Times Of India

CHENNAI: Sophiline Cheam Shapiro (41) vividly remembers the day her father died of starvation under the Khmer Rouge regime. "My father was very hungry. He asked my mother for some food but before she could finish cooking, he passed away," Shapiro recalls.

She was only eight when she saw two Khmer Rouge men wrap the frail body of her father in a sheet and carry him away at night. "It was the saddest moment of my life," she says.

The Khmer Rouge party, under its leader Pol Pot, ruled Cambodia from 1975 to 1979 after which it was forced out of power by the invading Vietnamese Army. The regime was infamous for its killing fields' where it forced Cambodian people to work in collective agrarian farms.

One of the foremost classical dancers of Cambodia, Shapiro is visiting Chennai for the first time to take part in the annual Natya Kala Conference that takes place during the Margazhi festival. She is here to demonstrate the role of the epic Ramayana' (or Reamker' as its known in Cambodia) in performing arts.

It is this love for art that helped Shapiro regain her identity and gave her a sense of purpose after her experiences as a child survivor of the regime. "Since the officials banned any culture other than theirs, I used to sing the Khmer Rouge songs, though I did not know the meaning. I was hungry all the time but I needed art to get me through," she adds.

And it was a tough journey. "We were forced to leave our homes in the city. We had to settle where they told us to and start working on the fields," says Shapiro, who also lost her two brothers and grandmother. "Everyone, including children, worked from dawn to dusk. As a child, I was asked to collect cow dung and plants to make fertilizers," she says, adding that they were served only two meals a day.

Shapiro and the other children had no chance to go to school. Instead, she was separated from her mother and six sisters to be sent to a youth organisation where they had to work under the hardest circumstances.

After the fall of the Khmer Rouge regime, 12-year-old Shapiro was reunited with her family and began rebuilding her life. She started learning Cambodia's classical dance form Robam Boran at the age of 14 when she enrolled in the Royal University of Fine Arts (RUFA) in 1981 at Phnom Penh. "My uncle, then minister of cultural affairs, suggested I learn dance," she says.

Shapiro was inspired by her teachers who were rebuilding Cambodian culture. It is estimated that 90% artistes had died during the regime. "Dance gave me a sense of purpose, pride and brought beauty and hope back into my life," she says. "And it helped me connect with my heritage and who I am," she adds.

Though Shapiro gradually brought her life back to normalcy she married John Shapiro in 1991 and is now a mother of twin sons she confesses she was tormented by the experience for years. "My ordeal lasted three years, eight months and 20 days but the nightmares continued. I dreamt that I was still working in a field, hungry and shivering or a soldier was chasing and shooting me. I would wake up screaming," she says.

Shapiro is still trying to understand what she faced as a child, and that often takes shape in her works. "I am very angry that none of the leaders ever took responsibility for their actions. I try to convey through my works what Khmer Rouge meant to me, because it is a past that no Cambodian can erase," she says. Now, with the Khmer Arts Academy that she and her husband oversee, she hopes to preserve the dance form. "I love my country and to continue our rich legacy is my calling," Shapiro adds.
Posted by CAAI News Media at 11:59 pm No comments: 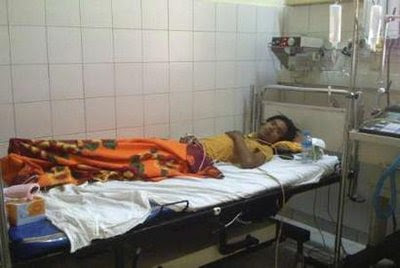 PHNOM PENH (Reuters) - A 19-year old Cambodian man has survived the H5N1 bird flu virus which has killed seven other people in the poor Southeast Asian nation since 2005, a health ministry official said on Sunday.

The youth, who became infected after eating dead poultry, was discharged from a Phnom Penh hospital on Saturday after being treated for 10 days, Ly Sovann, deputy director of communicable disease control department, said.

Cambodia began culling poultry near its capital last week, and ordered a three-month ban on poultry being moved from the province of Kandal, 50 km (30 miles) south of Phnom Penh, after tests confirmed it was hit by the deadly virus.

The young man, the eighth person in Cambodia to have contracted bird flu since its first case in 2005, fell ill on November 28 but was only confirmed as having bird flu on Dec 11.

All seven of Cambodia's previous human cases have died.

Since H5N1 resurfaced in Asia in 2003 it has killed more than 200 people in a dozen countries, according to the WHO. 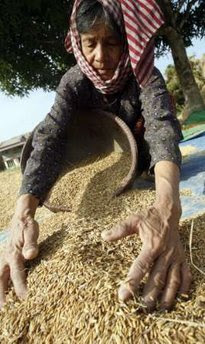 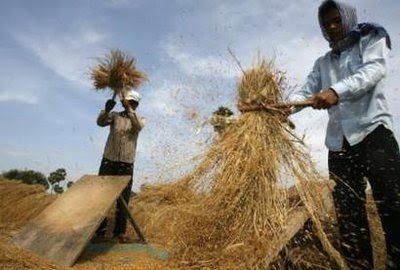 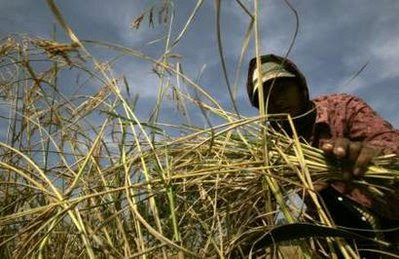 A Cambodian farmer cuts rice stalks in a paddy field in Takeo province, 80 km (50 miles) south of Phnom Penh during the rice harvesting season December 21, 2008. About 85 percent of the population of around 14 million people are farmers.REUTERS/Chor Sokunthea (CAMBODIA) 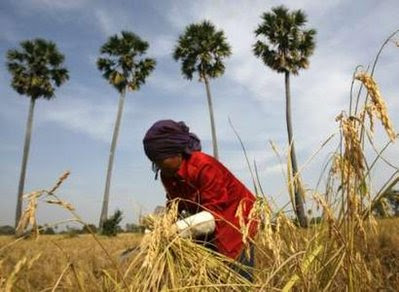 A Cambodian farmer cuts rice stalks in a paddy field in Takeo province, 80 km (50 miles) south of Phnom Penh during the rice harvesting season 21 December, 2008. About 85 percent of the population of around 14 million people are farmers.REUTERS/Chor Sokunthea (CAMBODIA)
Posted by CAAI News Media at 11:16 pm No comments:

ASEAN summit in late February may be rescheduled: report 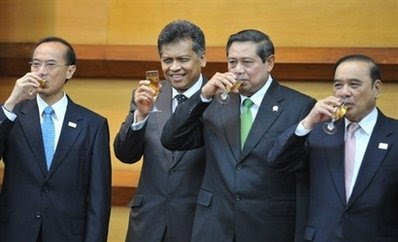 SINGAPORE (AFP) – The delayed summit of Southeast Asian nations due late February in Thailand may be rescheduled as some leaders are unable to make it, Singapore's Foreign Minister George Yeo said in remarks published on Sunday.

"I thought we had settled it in Jakarta a few days ago, but now I'm told that there are some leaders who can't make it," Yeo was quoted as saying in Singapore weekly The Sunday Times.

He did not mention the leaders who are not able to attend the February 24-26 summit of the Association of Southeast Asian Nations (ASEAN) in Bangkok but said alternative dates being considered include late January or early February.

Thailand, which currently holds the rotating chairmanship of the 10-member bloc, said last week it will host the summit from February 24-26 at Government House.

The ASEAN meeting was delayed from mid-December amid political turmoil in Thailand, where crowds occupied the capital's airports in a protest against the ruling party loyal to ousted former prime minister Thaksin Shinawatra.

The protests ended when a court stripped Prime Minister Somchai Wongsawat of his position and disbanded the pro-Thaksin People Power Party in a vote fraud case.

Thailand was forced to delay the ASEAN meeting until March because of the blockade of Bangkok's airports which left 350,000 travellers stranded.

The ASEAN summit will also involve the group's dialogue partners, including China, South Korea, Japan and India, as well as the United Nations secretary general and chiefs of other international organisations.

No court can be considered legitimate if its judges and prosecutors submit to political diktat. Tragically, the United Nations-backed court in Phnom Penh investigating and prosecuting those most responsible for the Khmer Rouge’s crimes in Cambodia is at risk of doing just that.

The Court, called the Extraordinary Chambers in the Courts of Cambodia, has indicted a mere five people for the murder of close to two million between 1975 and 1979. Last week, the court’s international co-prosecutor, Robert Petit, proposed that an undisclosed number of additional suspects be formally investigated—a prelude to indictment. According to a December 8 press release from Mr. Petit’s office, his local counterpart, co-prosecutor Chea Lang, opposed the move. Because the process for resolving disputes between prosecutors is confidential, Ms. Lang’s reasons for opposing additional investigations are unknown.

Mr. Petit has filed a formal “statement of disagreement” indicating his commitment to press ahead with additional charges. Under the Court’s complicated structure, he can do this if authorized by the pre-trial chamber, an organ of the Court responsible for overseeing proceedings prior to trial and resolving disputes between co-prosecutors and co-judges. Prime Minister Hun Sen has in the past suggested that trying “four or five” people would be enough. Although most Cambodian officials today say that the government would not limit the number of people charged, the attitude persists that trying more people might be detrimental or destabilizing. Absent agreement between the two co-prosecutors, the Court’s judges will be asked to resolve the dispute.

If ever there was a moment to show that the Court is not a tool of the Cambodian government, this is it. Unfortunately, court rules provide that this issue must be addressed out of public view. All should understand, however, that the court’s very legitimacy to Cambodians and the international community is at stake. The Court must operate as transparently as possible in the coming days.

That will be difficult, given that the Court is the product of 10 years of negotiation between the UN and the Cambodian government. As a hybrid court, it has an awkward structure. The international and domestic co-prosecutors and co-investigating judges must agree before proceeding on major decisions. Where consensus cannot be achieved, a “super-majority” composed of at least one international judge is required for most significant action. This fragile arrangement has given rise to much skepticism about the Court’s capacity to reverse a long Cambodian history of improper interference in judicial operations.

In the past year, too, serious allegations of corrupt employment practices on the Cambodian side of the court have emerged. The UN investigated the matter in September, but did not release its findings. A pervasive lack of openness at the Court has not helped. This is an especially serious situation as any forthcoming judgments will be potentially vulnerable to crippling legal challenges.

Yet the Court’s greatest challenge by far is the new roadblock preventing further prosecutions. It has long been suggested that the limitation of charges to the five accused—all former Khmer Rouge members, unconnected to any current senior government figures—was a central part of the “unwritten bargain” that led the government to accept the Court. A number of senior figures in the current government apparently fear the potential consequences of establishing a model of transparency and accountability that might be applied more generally. Given the scale of the crimes and the breadth of criminal responsibility, any judicial process that arbitrarily narrows its focus to only those individuals would be a sham.

It is time for the donor governments that support the Court—including Japan, France and the US, which recently pledged its first contribution—to insist that the Court operate as a court of law. Anything less would be a betrayal of the memory of two million dead and numerous others who endured physical and psychological wounds. Both the victims of the Khmer Rouge and the next generation of Cambodians deserve an honest, judicial accounting of one of the worst atrocities of the 20th century.

Mr. Goldston is the executive director of the Open Society Justice Initiative, which provided advice and technical assistance during some early stages of the tribunal. [Published by courtesy of Wall Street Journal Asia.]
Posted by CAAI News Media at 8:18 am No comments: