Posted by CAAI News Media at 3:06 pm No comments: 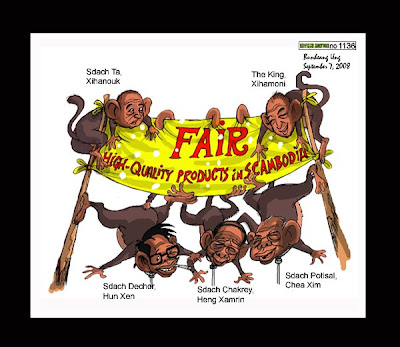 Posted by CAAI News Media at 9:04 am No comments:

The Bangkok Post reports Saroj Chavanaviraj would replace Tej Bunnag who resigned earlier in the week amid the political crisis and street protests surrounding the current administration.

He had replaced Noppadon Pattama who resigned July 10th after backing Cambodia's bid to have an 11th century temple on the countries' shared border declared a World Heritage Site.

Saroj is a former ambassador to France and has held several positions in Thailand's foreign ministry.

He must be endorsed by Thailand's King Bhumibol Adulyadej before becoming Foreign Minister.

Mr. Samak is under added pressure to fill the open post because Thailand is hosting a regional summit of the Association of South East Asian Nations (ASEAN) in December.

Some information for this report provided by Reuters.
Posted by CAAI News Media at 9:02 am No comments:

So Far, It Just Isn't Looking Like Asia's Century

Border talks with Cambodia to go ahead next month

SAROJ TO DO HIS BEST TO MEND TIES, WILL STICK TO TIMETABLE SET BY PREDECESSOR

Foreign Minister-designate Saroj Chavanaviraj has pledged to keep trying to mend ties with Cambodia and do his best to chair the Association of Southeast Asean Nations (Asean) meeting. Mr Saroj, 66, who said he would not give any formal interviews until his appointment is royally endorsed, stressed that he was committed to following the Thai-Cambodia meeting timeframe of the Joint Commission on Demarcation for Land Boundary (JBC).

Under the timeframe, agreed upon between his predecessor Tej Bunnag and the Cambodian foreign minister on Aug 19, both ministers would meet next month after the reduction of troops on the border near the Preah Vihear temple was completed.

Chairing the regional grouping would also be another main duty of the retired diplomat.
He said he would do his best in his new job.

Meanwhile, the commander-designate of the Second Army, Wiboonsak Neeparn, who is also the co-chair of the Thai-Cambodian Border Committee, said the political turmoil in Bangkok could be one of the reasons behind the indefinite postponement of the RBC meeting, which was to discuss the second phase of the troop redeployment in the controversial area around the Preah Vihear temple.

The meeting was to have taken place on Aug 29. Lt-Gen Wiboonsak conceded that Cambodia may not want to hold talks until the political conflict is resolved.

Another reason, he said, was the reshuffle and promotions within the Thai army. He will officially take over the post of Second Army commander on Oct 1.

Lt-Gen Wiboonsak stressed that both countries must honour the basic principle of the military reduction on equal terms.

Cambodian Foreign Minister Hor Namhong said Cambodia would withdraw all its military personnel from around the temple, which was listed as a World Heritage site on July 8, and install policemen instead.

Foreign Ministry officials, however, predicted that progress in the Thai-Cambodian talks might not be as satisfactory as many would have hoped amid the political instability in Thailand.

The interim agreement to resolve the Preah Vihear border issues, which has to be endorsed by parliament to comply with the law on treaties, has not gone on the agenda of the cabinet meeting.

The interim agreement, prepared by the ministry with approval from the Cambodian side at a meeting in the resort town of Cha-am last month, was to provide a legal platform for officials to discuss the issues related to the border survey and demarcation under the terms of reference and master plan of the initial JBC agreement.
Posted by CAAI News Media at 8:56 am No comments: 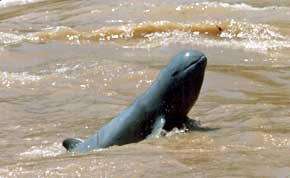 Overfishing, war, and pollution have decimated the dolphins, and only a few dozen of them are left. Environmentalists have begun a project aimed at contributing to the development of the villages and to saving the dolphins, but their numbers continue to diminish.

Phnom Penh (AsiaNews/Agencies) - Saving the few dozen freshwater dolphins still remaining in the Mekong River, and helping the local population by guaranteeing them a source of livelihood: this is the aim of the "ecotourism" project begun in the border area between Laos and Cambodia by the Cambodia Rural Development Team (CRDT), which has the twofold objective of protecting wildlife and providing an alternative source of income for the inhabitants of the villages.

For centuries, the waters of the Mekong River - which crosses China, Laos, and Cambodia, before reaching the ocean in Vietnam - were the uncontested habitat of thousands of freshwater dolphins. The Sino-Indian War and the increase of industrialization, together with high pollution levels, have decimated the species, only a few dozen of which survive; 71, according to the latest count provided by the World Wildlife Fund.

The village of Sambor, in the north of Cambodia, is one of the places selected by the CRDT as a model of environmentally sustainable development: tourists are given the opportunity to live in contact with the local population, to help the inhabitants protect the natural habitat of the dolphins, and to teach a little English to the children. The most frequently requested activities include well digging, sewer construction, and work in the fields.

The experiment promoted by the activists is intended to save the dolphins from extinction by radically changing the habits of the inhabitants of the village, who for decades have used aggressive fishing methods like explosives and high-capacity nets. Now the freshwater dolphins are seen as a resource to be "exploited" in order to attract foreign capital and tourism; the visitors pay 60 US dollars for three days in contact with nature, and the money is used to support the local population. In a country in which half the population lives on a dollar a day, the inhabitants of the village earn five dollars a day by providing food (two dollars) and lodging (three dollars) for the visitors.

But recent studies have demonstrated that if the benefit for individuals is beyond question, the same cannot be said for the dolphins: in spite of a small increase in their numbers in the initial phase of the project, it is not yet clear whether this is truly effective for preserving the species.

Scientists affirm that a new and not yet identified disease is spreading rapidly, killing the offspring. Researchers fear that the new virus - caused by pollution in the water, infested with chemical agents and the runoff from gold mining projects - could soon lead to the total extinction of the dolphins.
Posted by CAAI News Media at 8:53 am No comments: