via CAAI
News Date: 19th March 2011
Senior officials from the foreign ministries of the Lower Mekong countries--Cambodia, Laos, Thailand and Vietnam--met here on Friday with the U.S. State Department officials to draft a joint action plan for the development in four key sectors.
"The two-day meeting aims at developing a joint plan of action for the cooperation on education, environment, health and infrastructure in
the Lower Mekong countries ahead of the regional forum of the Association of Southeast Asian Nations (ASEAN) in July in Indonesia," a statement released in the meeting said.
Tuot Panha, undersecretary of state for Cambodian Ministry of Foreign Affairs and International Cooperation, said during the opening ceremony that the U.S. assistance to the Lower Mekong countries is
very vital to develop the region.
"The assistance also reflects the U.S. commitment to advancing peace and prosperity in the Mekong sub-region and in ASEAN as a whole," she said.
The participants of the meeting included Latsamy Keomany, director general of Lao's Economic Affairs Department, Surasak Chuasukonthip, deputy director general of Thai economic affairs department, Ha Huy
Thong, director general of Vietnamese economic affairs department, and Joseph Y. Yun, deputy assistant of the U.S. state department.
The meeting focused on the Lower Mekong Initiative, which was launched in July 2009 by the U.S. secretary of state and the foreign ministers
of Cambodia, Laos, Thailand and Vietnam, with a view to developing regional approaches to address current and future trans-border challenges in the Lower Mekong countries, with the goal of advancing
peace and prosperity.
Source: GNA
Posted by CAAI News Media at 10:48 am 1 comment:


Published on March 20, 2011
Re: "No country for old men and poor men," World, March 19.
I applaud the Cambodian government's new laws to protect foreign men from predatory Cambodian women.
One law prohibits foreign men aged 50 or older from marrying local women. I'm not familiar with conditions in Cambodia, but I'm told there's a large population of impoverished young women. One can easily imagine that some of them might get jobs in bars and seek out ancient foreign sugar daddies to marry in a desperate attempt to escape poverty. Should a young woman succeed in capturing such a foolish old goat, he will find to his sorrow that she will quickly develop spending habits designed to reduce him to penury, compounded by the incessant demands of her family, relatives, assorted leeches and hangers-on, possibly her entire village, and even the surrounding province.
This new law will protect elderly foreign men from such depredations. Such men are usually lonely, hungry for love, and easy prey for calculating young vixens. I counsel such men to buy a dog. A young woman's love will be entirely simulated and dependent on continued affluence, whereas a dog will provide true and unconditional love and a loyalty that will never fail.
A second law requires a foreigner under the age of 50 to have a monthly income of Bt75,000 before he can marry a Cambodian woman. Earlier it was only suspected that local ladies married foreigners for their money. This new law will guarantee it. But this law also has the effect of protecting foreign men, because I doubt that there are many expats in Cambodia who earn Bt75,000 a month, especially if they're English teachers.
I warmly commend the Cambodian government for its altruistic and compassionate concern for the well-being of its population of foreign men.
Horace Beasley (Mr)
Bangkok
Posted by CAAI News Media at 10:44 am 2 comments: 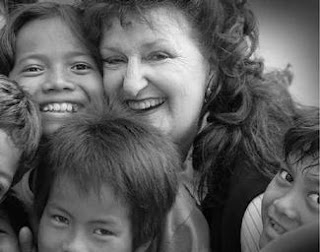 Ruth Golder is working through the pain of her injuries to care for Cambodian orphans.
http://www.sunshinecoastdaily.com.au/


Mark Bode
20th March 2011
IT’S hard to keep a good woman down, as family and friends of Ruth Golder are once again witnessing.
The former Sunshine Coast resident has lived in Cambodia for the past 11 years, where she provides shelter to the country’s orphans and engages in other charity work.
But she took a nasty fall at her Phnom Penh home last month.
Despite splintering a bone in her neck and suffering multiple muscle and tendon tears, as well as bad bruising, it has been a struggle to get the 68-year-old to rest since the incident about a month ago.
Ms Golder’s daughter Tracey, currently on the Coast attending to business at their Love In Action office at Bli Bli, said her mother was one headstrong woman.
The day after she tripped on a bedsheet and badly twisted her body as she slammed into a hard wooden door, she took possession of a newborn baby.
Not trusting orphanage staff to adequately care for the infant, Ms Golder took on the responsibility herself.
“Anyone who knows my mum knows she won’t lie down and die,” she said.
“She’ll be physically okay (eventually). She’s doing the right thing by her body as much as she can.
“Her (Australian) doctor says she’s a tough old bird.”
Tracey said her mum was still in traction a lot of the time, was still in much pain and tired easy.
“She’s still looking after the bubbies (but) she’s wise, she’s not stupid.
“She knows she’s got a long haul in the country.”
Tracey said Ms Golder had hoped to get back to Australia soon, but her doctor forbade her from taking the 10-hour flight.
Instead, mother and daughter plan to meet up in Malaysia soon for a much-needed break.
“It’s the first holiday we’ve ever had together,” Tracey said.
“I’ll still run the office while in Malaysia, but we’ll have a week off. One way of getting us to have a break is to get us both out of the country.”
Through their non-government, not-for-profit organisation, the Golders run two orphanages and a nursery in the Cambodian capital.
Love In Action’s other charitable work includes educating the children in its care and providing clean drinking water for poorer, remote areas of the country.
Posted by CAAI News Media at 10:42 am No comments: 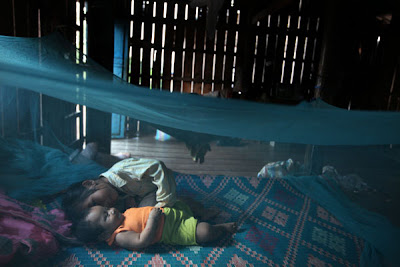 Children rest under a mosquito net in Prey Mong Kol, Cambodia in a file photo. Malaria is contracted when people are bitten by mosquitoes infected with a parasite called Plasmodium.
Photograph by: Paula Bronstein, Getty Images
http://www.vancouversun.com/


By Lana Haight
Postmedia News March 19, 2011
SASKATOON — Scientists in Saskatoon have developed an inexpensive malaria treatment that will help the million people who die every year from the infection.
“This is the most important drug in the treatment of malaria today. The World Health Organization says it should be the first line of defence,” said Patrick Covello, a senior research officer at the National Research Council in Saskatoon.
Covello and his team figured out a way to produce a difficult-to-cultivate chemical needed to build effective malaria drugs.
The breakthrough was announced Friday at the National Research Council Plant Biotechnology Institute.
The best drugs available to fight malaria are made with artemisinin, a compound derived from the sweet wormwood plant found in parts of Asia and Africa. But cultivating and harvesting the plant and then extracting artemisinin is time-consuming and labour intensive, says Covello. And the supply of the natural compound is also dependent on weather and growing conditions.
In 2003, Covello began work to identify the genes in the wormwood plant that produce the protein that leads to artemisinin.
“We identified four genes in what we call the pathway to artemisinin in the plant,” he said in an interview.
Meanwhile, University of California at Berkley researchers found they could develop a precusor to artemisinin by introducing chemicals into yeast.
Covello contacted Amyris Technologies, a spinoff company from the Berkeley research group, to suggest it use the genes his group had identified in the wormwood plant. When two of the genes identified in Saskatoon were introduced to the yeast compound developed at Berkeley, the production of artemisinin doubled.
The Institute for OneWorld Health, the American-based organization that has led the project to develop the semi-synthetic artemisinin, and pharmaceutical company Sanofi-aventis jointly announced on Friday that the drug company is preparing to ramp up production using the genes identified in Saskatoon.
The Bill & Melinda Gates Foundation, which has already contributed $42.6 million toward the American research, is also supporting the production of the drug to ensure it will be available on a not-for-profit basis for the developing world.
“The idea is to provide the developing world with antimalarial drugs at the lowest possible cost and, in addition, to provide a very stable supply because this yeast-fermentation process is shorter term and more reliable than growing the plants themselves,” said Covello.
Covello understands that Sanofi-aventis will begin commercial-scale production in 2012.
The federal government has spent $869,000 over eight years to support the Saskatoon research.
“Our government is committed to improving the health of women and children in developing countries,” said Gary Goodyear, minister of state for science and technology, in a government news release.
“This new development in the production of a malaria treatment represents a major development in the fight against the disease. It will strengthen Canada’s position as a world leader in health research and provide a reliable and affordable solution.”
Saskatoon StarPhoenix
lhaight@thestarphoenix.com
Posted by CAAI News Media at 10:39 am 2 comments: