via CAAI
09/12/2010
The fifth Asia-Pacific Francophone Parliamentary Assembly (APF) conference has convened in Phnom Penh, Cambodia, from September 9-11.
Vice Chairman of the Vietnamese National Assembly’s External Relations Committee and APF Vice President Ngo Quang Xuan has attended the event together with delegations from the Cambodian, Lao, French, Belgium and Canadian parliaments and many international organisations.
The conference focused discussion on socio-economic development policies after the global financial crisis and new cooperation opportunities for French-speaking countries in the Asia-Pacific.
The delegates adopted a joint communique, expressing their consensus on enhancing cooperation among French-speaking countries in the Asia-Pacific in education and economic development to raise the people’s living conditions and reduce poverty rate.
Posted by CAAI News Media at 11:41 pm No comments: 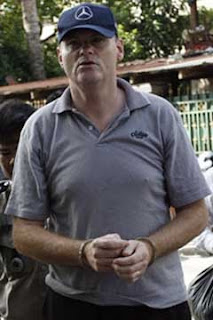 via CAAI
Sunday, 12 September 2010 17:46 Soeun Say
COMMUTERS heading to Phnom Penh’s eastern bank of Chrouy Changvar can look forward to an easier ride after officials announced plans today to construct a second bridge connecting the fast developing district.
The new bridge, set to commence construction next year, will run parallel to the existing crossing with the intention of easing congestion on the major trade route and open up key economic zones, Thy Sophorn, deputy general director of Ministry of Transportation told The Post today.
“A new Chrouy Changvar bridge will start construction in next year and its will construction cost $27.5 million” Thy Sophorn, deputy general director of Ministry of Public Works Transportation and a member of the bridge construction commission told the Post yesterday.
The US$27.5 million bridge that will span some the 795 metres is part of broader government plan to connect key economic zones previously separated by rivers, he added...
read the full story in tomorrow’s Phnom Penh Post or see the updated story online from 3PM UTC/GMT +7 hours.
Posted by CAAI News Media at 11:34 pm No comments: 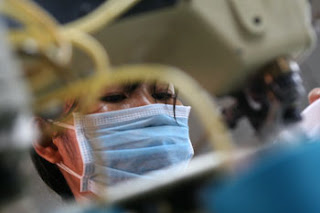 Photo by: Tracey Shelton
An employee sews at the Injae garment factory.
via CAAI
Sunday, 12 September 2010 15:50 James O'Toole
LABOUR leaders say more than 80,000 of Cambodia’s garment workers are set to take to the streets tomorrow for a five-day strike that could be the largest the Kingdom has seen in recent memory.
The dispute follows a broader pattern of industrial turmoil that has rocked the region’s intensely competitive garment industry recently as unrelenting pressure to drive labour costs down inevitably conflicts with the demands of workers for a better minimum wage.
Pay disputes have been fought out on the garment factory floors of China, Bangladesh and Vietnam as work stoppages halt production and at times erupt into violence. With the wave of work stoppages set to hit Cambodia tomorrow, the same questions that have been faced by regional competitors will confront the Kingdom; namely, how to keep costs low and competitiveness high while at the same time providing workers with basic livelihoods.
“The win-win situation is to raise both productivity and wages,” said Chikako Oka, a fellow at the London School of Economics who has studied the Cambodian garment sector. “A trickier question is which one comes first and whether one follows the other.”…
Read the full story in tomorrow’s Phnom Penh Post or see the updated story online from 3PM UTC/GMT +7 hours.
Posted by CAAI News Media at 11:33 pm No comments:

Posted by CAAI News Media at 12:12 am No comments: