The Slums Of Phnom Penh

via CAAI
NEW DELHI: As a New Year gift to Buddhist pilgrims, the government has decided to extend Visa-on-Arrival facility to five ASEAN countries from January 1.
"It is being decided that Visa-on-Arrival (VoA)facility would be extended to five more countries -- Cambodia, Philippines, Vietnam, Laos and Myanmar. The scheme would be operational from the New Year 2011," a senior Tourism Ministry official said.
The single-entry visa, to be issued at Delhi, Mumbai, Chennai and Kolkata airports, will have a validity of 30 days.
"The decision was taken after due discussion with the ministries of External Affairs and Home. A formal announcement in this regard will be made soon," the official said, adding, "the VoA would facilitate in attracting more Buddhist pilgrims from these countries."
India had launched the VoA in January on a pilot basis for Singapore , New Zealand, Japan , Finland and Luxembourg.
"The response is so far good and 5,644 tourists availed this facility between January and November this year. Now we want to include more countries," he said.
Tourism Ministry has signed an MoU with International Finance Corporation to develop the Buddhist circuit.
"Currently, there is a special train connecting Buddhist sites and steps are being taken to make this circuit a well-connected route," the official said.
Posted by CAAI News Media at 9:30 pm No comments: 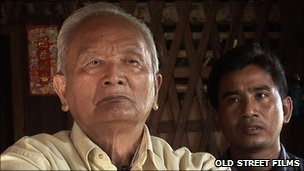 It took many years for Thet Sambath (r) to gain the trust of Pol Pot's deputy, Nuon Chea
via CAAI


Witness | December 09, 2010
http://www.witness.org/  | WITNESS partner LICADHO [ http://www.licadho-cambodia.org/  ] filmed this interview with human rights defender, the Venerable Luon Sovath, in Cambodia for International Human Rights Day, December 10, 2010.
The Venerable speaks personally about how he uses video to fight for the rights of his community in Chi Kreng District, Siem Reap Province. The Venerable also speaks out about communities across Cambodia at risk of forced evictions. This video includes footage of 100s of villagers assembling outside the Siem Reap courthouse during the trial of land rights activists from the Venerable's village in Chi Kreng.
The Venerable is being featured by the United Nations Office of the High Commissioner for Human Rights in its Human Rights Day 2010 video [ http://www.youtube.com/user/UNOHCHR#p... ]
Read the WITNESS blog post about the Venerable's visit to New York City to attend the WITNESS Focus For Change Gala
[ http://blog.witness.org/2010/12/hrd2010  ]
Posted by CAAI News Media at 2:08 pm No comments:

THIS YEAR I learnt... By ROB HAMILL, 46, Olympic and trans-Atlantic rower 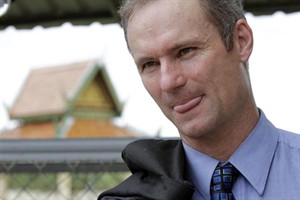 via CAAI
ROB HAMILL, 46, Olympic and trans-Atlantic rower, Te Pahu.
Thirty-two years ago Hamill's eldest brother, Kerry, was abducted, tortured and killed by the Khmer Rouge in Cambodia.
THIS YEAR I learnt...
...more about the thin and fragile line separating good and evil. And that we are all capable of both. Coming to understand that better has been quite...what is the word? Scary?
This year I went to Cambodia for the sentencing of Duch, the man who ran the prison my brother was incarcerated in. I also spent time travelling the country interviewing victims and perpetrators for a documentary we're making called Brother Number One. I'm trying to come to terms with the scary realisation that, depending on circumstances, everyone, or almost everyone, is capable of performing the atrocities these people committed. I was kind of put in the difficult position of interviewing one of the people who was responsible for torturing my brother. You might think it odd but I didn't wish to inflict a similar fate on him. Oh, don't worry, I've had thoughts of revenge, but I reckon violence met with violence achieves nothing, other than perhaps creating more violence.
Fact is, I would have lowered myself to the level of the perpetrator himself if I'd been aggressive. Anyway, avoiding the emotional part gave me the opportunity to recognise each individual Cambodian really was a victim in his or her own way. The learnings from that little experience continues like the grieving process.
That was my second time to Cambodia. The first was last year with the trial, where I took the stand to testify. I had been trying to get some reconciliation in my own mind about what occurred, to allow me some freedom, you know, to move on. And I was working towards that until I saw S-21, the prison itself, then I just completely, I went really dark on it. Any chance of forgiveness for that man Duch, who ran the prison, just evaporated. But interviewing those individuals, victims and perpetrators, I've become more open to the possibility of letting go again. It seems the more you explore these things, the more you try to understand, the more you pull away the veil of ignorance, then the more opportunity there is to allow yourself to move on.
Kerry was missing for 16 months before we heard the terrible news. About nine months after we discovered Kerry's fate, my second-oldest brother, John, killed himself. And, you know, my parents were distraught but had no one to talk to really. Of course, close relations did what they could to help but my parents were pretty much isolated, there were no social support professionals available. I guess if there's a message there, I'd say to people, reach out and try and talk about it. Cambodia is now finally finding its own voice to talk about their past and be heard.
But the biggest learning has come from Kerry himself. He was forced to write a confession, under duress, stating that he was a CIA agent. He used that confession, I believe, to remove himself from the horror by writing about life in New Zealand and its geography: Great Barrier Island, National Park, the list went on. And to emphasise the absurdity of the confession he named his own friends and family as fellow CIA trainees and trainers. And, sense of humour intact, he named Colonel Sanders as one of his trainers. The most poignant part in the confession was where he named the public speaking instructor as S.Tarr. Our mother's name is Esther. In this most dire of situations he was sending a coded message of love and hope to Mum.
We all have choices how we react to different situations. My brother chose, I think, a very brave, courageous course that transported him home and by doing so he gave himself something to live for, if only for that moment in time.
Posted by CAAI News Media at 1:58 pm No comments:

Posted by CAAI News Media at 1:51 pm No comments: 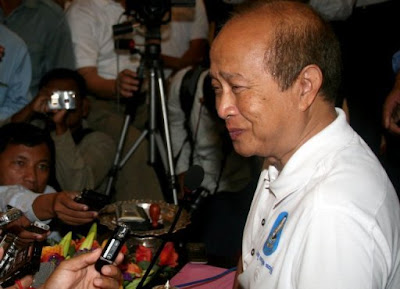 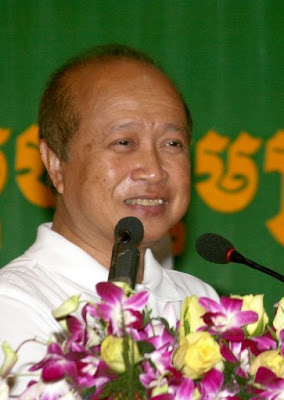 Prince Ranariddh was ejected from Funcinpec over fraud allegations in 2006

via CAAI
PHNOM PENH — Cambodian Prince Norodom Ranariddh returned to politics Saturday with a vow to reinvigorate the flagging royalist movement, taking the helm of his former party which has re-adopted his name.
Two years after quitting politics, Prince Ranariddh, who was Cambodia's first elected prime minister in 1993 after years of civil war, was re-instated as president of the party he created during a meeting in the capital.
Party members also agreed to re-name the Nationalist Party the Norodom Ranariddh Party (NRP).
The 66-year-old son of former king Norodom Sihanouk said in a speech that he was returning to politics to re-unite royalists ahead of 2012 local elections and a 2013 general election.
"I have seen that the royalists are hopeless, separated, I want them to be one family," he said.
Ranariddh called for an alliance with fellow royalist party Funcinpec, with him as leader.
"The prince wants to create a new party called Funcinpec 81 before 2012," party spokesman Pen Sangha told AFP. "The ball is now in the court of Funcinpec."
Ranariddh has been off the political scene since late 2008, when he said he was quitting the opposition after receiving a royal pardon on fraud charges and returning from self-imposed exile in Malaysia.
The prince's political career had begun with great promise when he won Cambodia's UN-sponsored election in 1993 as head of the royalist Funcinpec party.
However, he was forced to accept Hun Sen as co-prime minister, who then staged a coup in 1997.
In following elections, Ranariddh's voter appeal diminished as he entered into coalition agreements with Hun Sen's ruling Cambodian People's Party.
In 2006, he was ejected from Funcinpec over fraud allegations involving the illegal sale of the party's headquarters. He formed the NRP shortly afterwards.
The prince was sentenced in absentia to 18 months in jail over the fraud charges the following year but was later pardoned.
The NRP won just two parliamentary seats in Cambodia's 2008 general election, as did Funcinpec. The NRP then changed its name to the Nationalist Party.
Both parties have in the past expressed an interest in merging to improve the royalist movement's flagging fortunes.
Hun Sen warned the prince earlier this week that if he was coming back to politics, he would not be able to stay on as an adviser to Cambodia's King Norodom Sihamoni, Ranariddh's half-brother.
Posted by CAAI News Media at 1:37 pm No comments:

via CAAI
PHNOM PENH (Dec 11, 2010): Cambodia's government has approved plans for a new drug rehabilitation centre, the country's biggest so far, national media reported Saturday, following criticism of similar facilities by Human Rights Watch and other activist groups.
Moek Dara, secretary general of the National Authority for Combating Drugs, told the Cambodia Daily newspaper that the proposed centre would be located near the resort town of Sihanoukville and have a capacity of treating around 2,000 patients.
"The national rehabilitation centre would become the biggest ever in the country," he said.
In a report issued earlier this year, Human Rights Watch documented numerous instances in which inmates at Cambodian rehabilitation centres were beaten, tortured and locked up involuntarily.
The group has called for Cambodia to move towards a community-based, non-coercive treatment model, warning that the punitive approach taken in Vietnam and China is not effective.
Moek Dara said the new treatment centre would be non-coercive, but added that inmates would be held against their will if they "[refuse] to receive the voluntary treatment and [are] a danger to themselves or to society."
Vietnam is providing 2 million dollars in funding for the project, Moek Dara said.
Cambodia came under fire last year for forcing an untested Vietnamese herbal remedy on addicts in drug treatment centres. -dpa
Posted by CAAI News Media at 1:33 pm No comments: