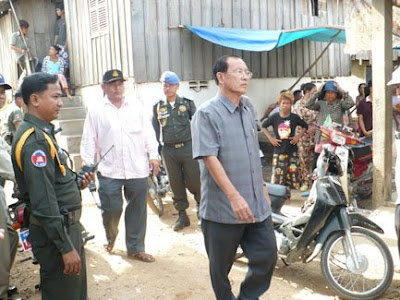 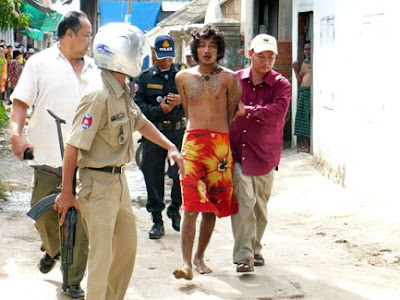 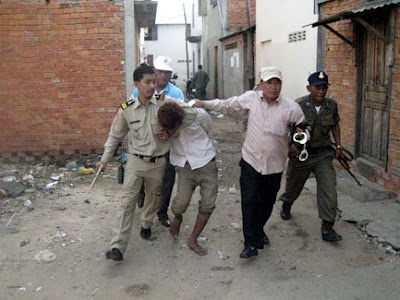 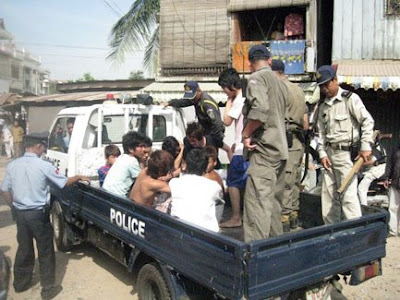 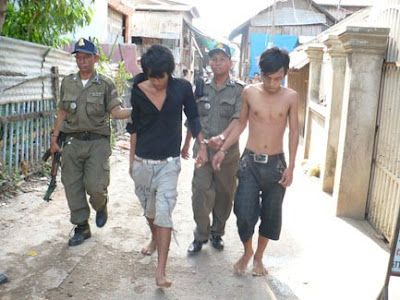 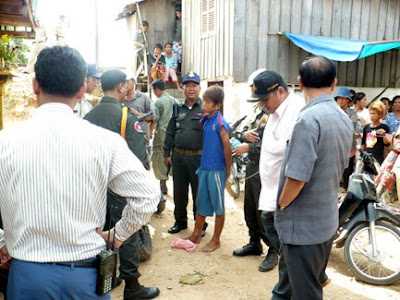 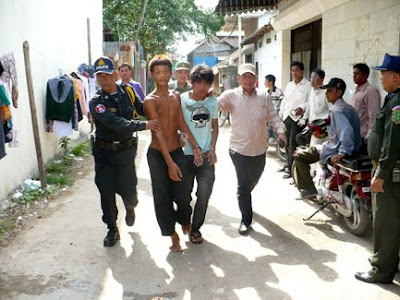 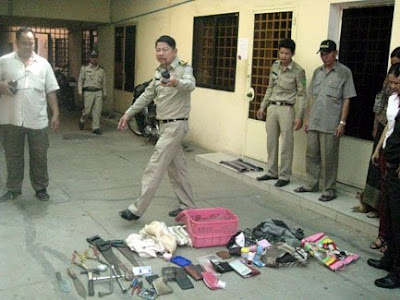 Pictures by Deum Ampil Newspaper
http://www.dap-news.com
A group of armed robbery was arrested by National police of Khan Tould Kork
Posted by CAAI News Media at 8:18 am No comments: 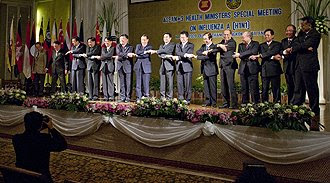 ASEAN+3 Health Ministers at a special meeting on Influenza A (H1N1) in Bangkok, Thailand. -- PHOTO: AP

They will boost anti-flu medicine stockpiles and intensify surveillance

BANGKOK: - Health ministers from 10 Asean countries and China, Japan and Korea yesterday concluded a key meeting with a pledge of regional solidarity and cooperation in the face of the H1N1 influenza pandemic threat.
The virus has not yet been recorded in Asean and Japan.

But its spread in North America and beyond has drawn predictions that it could infect up to one-third of the world's population within months, severely burdening public health systems.

In less than three weeks, it has spread to 25 countries, infecting 2,483 people and leaving 47 dead.

'No single country is able to control and cope with the threat alone. Rather, intensive international cooperation is required,' Thai Prime Minister Abhisit Vejjajiva said in opening remarks at the conference yesterday.

The ministers said in a statement that stockpiles of anti-flu medication would be enhanced, national pandemic preparedness plans implemented and surveillance intensified.

They also stressed the importance of transparency in public communication.

Japan announced that it would donate 500,000 doses of anti-viral medicine, plus 750,000 sets of personal protection equipment, to Asean's existing stockpile, to be shared across the region as necessary should the virus arrive and spread.

The ministers said they would consider 'exit screening' as a cross-border disease control strategy.
Posted by CAAI News Media at 7:58 am No comments:

Last year in Cambodia, French pedophile, Michel Roger Blanchard, 44, was arrested for sexually abusing 5 Cambodian boys ages 11 to 16. Blanchard received a one year sentence and had to pay $50 to one of his victims.

Blanchard walked free last Tuesday, the remaining three months of his sentence having been suspended.

Mr. Seila, country director of the anti-pedophile NGO Action Pour Les Enfants, said they had observed Blanchard with at least 20 boys since 2005.
Posted by CAAI News Media at 7:56 am 8 comments:

Cambodia: The Bar Association Must Not Be An Instrument To Curtail Professional Freedom

The international norms and standards relating to the legal profession require that the lawyers could practice their profession without fear and intimidation. The professional rights of the lawyers have been recognised globally. The lawyers in Cambodia have the same status and the rights as their counterparts in other countries. The exclusive purpose of a Bar Association is to protect the independence and the integrity of the legal profession. Above all, the Bar must protect the lawyers from interferences by the executive. A recent case against Kong Sam Onn where an investigation against him has started by the Bar Association of Cambodia regarding acts he did in relation to his professional duties raise concerns about the threats to the legal profession in the country.

On 23 April, Kong Sam Onn, a lawyer, was present at a news conference where his client, Mu Sochua, a female Member of Parliament (MP) for the opposition Sam Rainsy Party, announced her defamation lawsuit against Prime Minister Hun Sen. She alleged derogatory remarks made against her in a public speech in Kampot province in early April. In that speech Hun Sen called an unnamed woman "cheung klang", a Khmer phrase (literally strong leg) meaning "gangster", and said that she had embraced an army officer and sued him afterwards. Mu took these together with other remarks as targeting her, not any other woman, as they matched her status and activities.

Several days later, on 27 April, Hun Sen countersued Mu and her lawyer Kong Sam Onn for their respective alleged defamatory remarks made against him during a news conference.
Hun subsequently called for the suspension of Mu's parliamentary immunity so that the courts could prosecute her. He was confident that this suspension would be "as easy as ABC", while his own suspension would be unlikely as his party has an overwhelming majority in Parliament. This call has been viewed as a threat to and intimidation against the opposition MP.

Several days later, on 30 April, Hun Sen's lawyer, Ky Tech, filed a complaint with the Bar Association of the Kingdom of Cambodia against Kong. It was lodged for the latter's remarks against Hun Sen during and after the news conference together with his alleged violation of the code of ethics for lawyers. Ky's complaint has prompted action by the Bar due to his influence as their former president and a government lawyer. The Bar has started its investigation which could lead to a range of disciplinary actions including Kong's debarment, which has already been mentioned. Chiv Senghak, the current President of the Bar, said that Kong could receive a warning, have his license suspended, or be debarred as a legal professional altogether. But Chiv did not prejudge the outcome; it would be up to the decision of the Bar's Disciplinary Council.

Kong has maintained that his remarks are not defamatory. He has made them in the defense of his client in his capacity as a lawyer and has not violated in any way the code of ethics for lawyers. During the news conference on 23 April, he said that his client Mu Sochua was the target of Hun Sen's derogatory remarks even though Hun Sen did not name her specifically. To pretend otherwise would be a "cowardly act", he asserted. He called Hun Sen's remarks insulting and inappropriate. He urged Hun Sen to imitate the Thai foreign minister who had apologized to Hun Sen, roughly a month previously. After that minister had called Hun Sen "nak leng", an appreciative Thai phrase meaning "lion-hearted and courageous" but with its derogatory Khmer equivalent meaning of "gangster".

Such remarks by Kong against Hun Sen do not seem to be specifically proscribed by the Law or the Bar Association of the Kingdom of Cambodia of 1995 or by the Code of Ethics for Lawyers which the Bar had issued in the same year.

Ky's complaint and the Bar's subsequent action together with Hun Sen's lawsuit were probably meant to serve as a threat and to intimidate Kong, a lawyer who had the audacity to make unpleasant remarks against the Prime Minister, known as "the Strongman of Cambodia". If tolerated, such a threat and intimidation would further enhance the known government control of the legal profession, undermine the independence of the Bar which is clearly stipulated under Article 1 of the Law on the Bar, and also prevent lawyers from playing their role as officers of the court.

At the individual level, the Bar's investigation into the defamation complaint against Kong, its outcome, and the action eventually taken against Kong Sam Onn are very much prejudicial to his case in court where he is facing the same charge. The plaintiff will use them in court to support the charge against him thereby swaying the court's decision against him. All these developments, beginning with Ky Tech's complaint with the Bar, will further reduce the chance of Kong having a fair trial with courts already under executive control.

The Asian Human Rights Commission (AHRC) urges the Bar Association of the Kingdom Cambodia to ensure that the lawsuit and the complaint against Kong Sam Onn will not have any negative consequence on the independence of the legal profession and his case in court. It should uphold this independence and withstand any external pressure. The Bar, with regard to Kong's case, should hold its investigation in abeyance, if such an investigation is called for, until the court has adjudicated the defamation lawsuit against him. As a matter of urgency, it should set out to ensure that Kong, a member of the Bar, has a fair trial in court.

About AHRC: The Asian Human Rights Commission is a regional non-governmental organisation monitoring and lobbying human rights issues in Asia. The Hong Kong-based group was founded in 1984.
Posted by CAAI News Media at 7:52 am No comments: