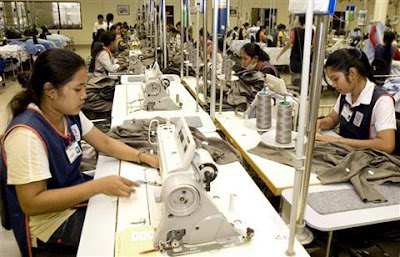 Photo: AP
“We do not want women to take over the roles of men, but to be equal or very much the same.”
Women face few prospects in the economy or politics, highlighting a need for better education and opportunities, a leading rights advocate said Thursday.
Pung Chhiv Kek, founder of the rights group Licadho, told “Hello VOA” that women here are limited in what they can do, with many finding their way to labor in the garment sector.
“We do not want women to just be garment factory workers,” she said. “If women have work to do, it’s better than nothing. But we want to see women becoming the presidents of companies, leaders of large or medium-sized companies. We want women to obtain very high levels of education in order for women to be incorporated in all sectors of societal leadership.”
“We do not want women to take over the roles of men, but to be equal or very much the same,” she said.
She noted that Tuesday marked the centennial of International Women’s Day, which began 100 years ago when women worldwide began standing up for their rights.
Cambodian women face a wide range of obstacles in their educational development. Most drop out before university, and only one about 1 percent of key leadership roles in the government are held by women, Pung Chhiv Kek said.
That includes 27 parliamentarians, one deputy prime minister, two ministers, 19 secretaries of state and 28 undersecretaries of state.
Government spokesman Phay Siphan acknowledged the shortage, saying women face an educational problem and poverty in post-conflict Cambodia.
“That does not mean the men of Cambodia, or the government, do not value women,” he said. Within the Cambodian People’s Party there are many women, he said.
The government has in its five-year development plan goals to develop women through better training and education, but despite such plans, women face an uphill struggle.
Pung Chhiv Kek said she has watched the government’s agenda for women since 1993, from the first election, and noticed more women in government positions. But she also noted that women face domestic violence, rape, trafficking, poverty, poor education and a culture of impunity that does little to bring justice for violence acted against them.
A country with greater development priorities for women will remain more stable, she said.
Posted by CAAI News Media at 11:58 pm 1 comment: 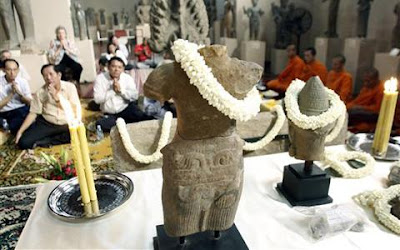 On June 17, 2010, the United States returned seven sculptures from the great Angkorian era that had been smuggled out of Cambodia.
“Illegally removing human remains and cultural property deprives countries of their ancestry and history.”
The Australian government has returned a collection of stolen prehistoric artifacts to Cambodia that were smuggled out of the country and seized by Australian authorities last year.
The collection of 30 artifacts included earrings and ornamental leg and wrist bangles, along with human remains. They were handed over to the Cambodian government at its embassy in Canberra on Thursday.
The jewelry had been brought into Australia and were being sold on the website E-Bay through an Australian art gallery, Australian Art Minister Simon Crean said in a statement.
“Illegally removing human remains and cultural property deprives countries of their ancestry and history,” he said.
Dougald O’Reilly, director of the Cambodian conservation NGO Heritage Watch, said in an e-mail the jewelry was likely looted from northwest Cambodia, where in recent years villagers have begun to raid ancient burial sites. The jewelry could date back to 100 AD to 300 AD, he said.
“The return of these artifacts demonstrates the cooperation and understanding between Cambodia and Australia in protecting cultural heritage and combating the illegal trade of cultural property,” Cambodian Ambassador to Australia Chum Sounry said.
Hat Touch, director general of the Ministry of Culture’s heritage department, in Phnom Penh, said he was in contact with the Cambodian Embassy and was working to bring the artifacts back “as quickly as possible.”
Posted by CAAI News Media at 11:56 pm No comments: 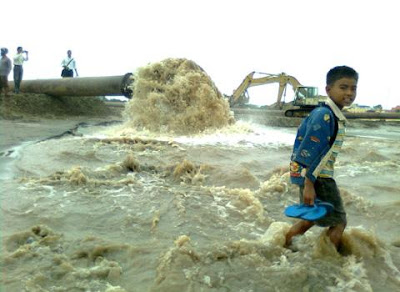 Thailand and Cambodia agree to meet at UNESCO on temple dispute


via CAAI
Mar 11, 2011
Bangkok - Cambodian and Thai officials are to meet May 25 at UNESCO's Paris headquarters to discuss the Preah Vihear temple, which sparked a deadly border clash this year.
The meeting is the outcome of a visit by UNESCO special envoy for Preah Vihear, Koichiro Matsuura, who travelled to Bangkok and Cambodia late last month, UNESCO said in a statement issued in Paris.
'I am very pleased with the success of Mr Matsuura's mission, and I am very encouraged by his talks with Prime Minister Abhisit Vejjajiva of Thailand and Prime Minister Hun Sen of Cambodia, which have helped open the way for further dialogue on the effective conservation of Preah Vihear,' UNESCO Director General Irina Bokova said. 'This will be the main aim of discussions in Paris on May 25.'
Bokova did not specify who would represent Thailand and Cambodia at the May meeting.
The 11th-century Hindu temple was put on UNESCO's list of world heritage sites in 2008 despite objections by Thailand that the land adjacent to the site was still the subject of a border dispute.
Thailand has asked UNESCO to postpone the world heritage listing process of the temple on its border with Cambodia until the territorial dispute was settled.
Thai and Cambodian troops clashed February 4-7 around Preah Vihear vicinity, killing at least 10 people.
The International Court of Justice ruled in 1962 that the temple belonged to Cambodia but stopped short of determining the border demarcation in the contested area.
Both countries claim a 4.6-square-kilometre plot of land near the temple, which has been included under Cambodia's management plan for UNESCO's World Heritage Committee.
Both sides have beefed up their forces near the temple, 450 kilometres north-east of Bangkok, since July 2008, leading to several border skirmishes over the past two and a half years.
Posted by CAAI News Media at 11:48 pm No comments: