No tax applied for two product groups from Laos, Cambodia


The Minister of Industry and Trade (MoIT) has issued two circulars regulating the 2010 and 2011 quotas for products imported from Laos and Cambodia that will not have import taxes levied on them.
Accordingly, rice and dry tobacco exported to Vietnam from Cambodia with custom declarations from November 11, 2010 to December 31, 2011 and from Laos with custom declaration within 2011 will not be imposed taxes.
Those products must have a certificate of origin approved by the Cambodian and Lao custom offices.
The circulars will be valid from January 17-Decmber 31, 2011.
Posted by CAAI News Media at 7:51 am No comments:

Cambodia: Silenced by a brutal past 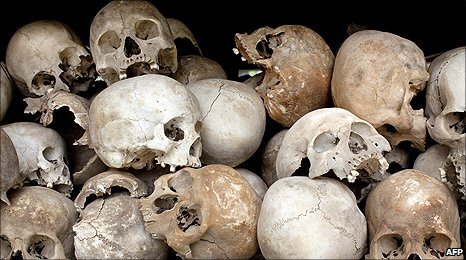 Up to two million people are thought to have died during the Khmer Rouge's rule
Four leaders of the Khmer Rouge, which ruled Cambodia in the late 1970s, will face trial next year accused of genocide, torture and religious persecution. But many of those affected by the country's brutal past still cannot speak about what happened.
The psychologist had agreed to be interviewed before I arrived in Phnom Penh.
But when we get to his office, beside a main road leading out of the city, where the green fields begin, there seems to be a problem.
A long, urgent discussion in Khmer ensues with our translator, Kunthi. The psychologist will talk, but only in English, and his name must not be used. "Why English?", I ask myself, but then drop it.
Replies to questions about his work with "victims" and "perpetrators" (as they are called here) of the Khmer Rouge period 30 years ago, are halting.
And I need a better feel for the internalised voices that are part of what I think of as "the great silence" here. 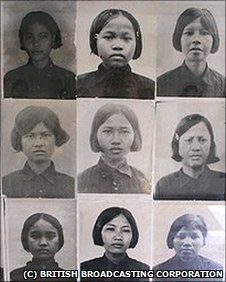 Thousands are believed to have passed through the regime's prisons
Older people just do not talk about the past and their mantra to the young is that staying silent is always a solution if there is a problem.
What used to be a survival strategy for them as children, in a time of unimaginable brutality, has become almost a national characteristic a generation or two on.
I rack my brains for a question that will bring our interviewee out of himself.
"Can you tell us," I ask finally, "what it is like inside the head of a perpetrator, and inside the head of a victim, now, today? Can you just be them for me?".
I hold out my arm towards him, beginning the classic radio producer's torture of the aching, extended arm, weighed down with an increasingly heavy microphone at the end.
We have turned off the air-conditioning because of the noise, sweat trickles in rivulets down my back. He lowers his eyes and begins to speak, slowly and softly in English, as a victim first.
"I can smile at you," he says, "but I don't know, one day you can kill me or, when you kill me and escape, you can be safe. You can just run away into another far-off province."
And then, in the role of perpetrator, he says: "I will try to hide my identity as much as possible, I will try not to talk about what I have done because I don't trust you.
"I want to tell the truth, I am not happy about the past, but I have no choice. I know I killed your father, but you don't know, you were small. I try to be as distant as possible in the relationship."
Today children who lost both parents live among their parents' killers
The psychologist talks methodically for about 15 minutes and everything slows as he paints a picture of a country of small villages in which an entire society is distorted by the tragedies and atrocities of the past.
Where everybody knows things that cannot be said, where one businessman does not deal with another businessman because he was a killer.
Where victims killed too, sometimes simply for survival.
Secrets are everywhere: knowledge of where bodies were buried, who buried them, who did what to who.
" Today, children who lost both parents live among their parents' killers. "
Avoiding history
The next day I ask the president of the Cambodian Centre for Human Rights, Ou Virak - a respected activist and intellectual - about the continuing bitterness of life in the countryside. He replies saying that the international community simply does not fully grasp what is going on in rural Cambodia. 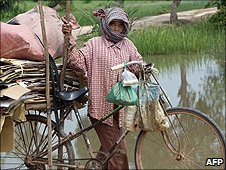 Many Cambodians find it difficult to talk about the past
This is a country, I feel, criss-crossed by invisible threads, the paths that people walk on to avoid their history.
"All we can do is try not to get closer," the psychologist concludes. And then he simply stays silent, eyes cast down, hands in his lap.
If I had not taken the battery out of his wall clock before we began the interview you would just have heard the clock ticking. We walked out into the humid heat in silence.
Later, I discover the reason the psychologist speaks in English is because the authorities do not really censor what is said in English. That's because, as the editor of the English language version of the Phnom Penh Post says to me, somewhat ruefully, they know hardly any Cambodians will read or hear it.
Time and again I am told: "We don't have a culture of reading in this country," which actually means, "we killed everyone who could read". This is old news.
Information about Pol Pot and the Khmer Rouge is in the open. Comrade Duch who ran the S-21 prison has been found guilty, there are four more Khmer leaders in prison just down the road from here.
Later that night rain pounds fiercely on the wide leaves of the palms outside my window and lightning flashes perilously close to the Buddhist temple next door.
I am trying to write up my notes about the psychologist but somehow it all seems pointless.
There are foreign investors, NGO workers, diplomats, as well as backpackers and young travellers lured by holiday brochures describing Cambodia as an "enthralling destination" and eulogising the "warm, enigmatic people".
There are tours, temples, mountains, wonderful beaches. But all of this just seems to skate over the top of the enigmatic Cambodians who walk their own invisible paths.
How to listen to: From Our Own Correspondent
Radio 4: Saturdays, 1130. Second weekly edition on Thursdays, 1100 (some weeks only)
Posted by CAAI News Media at 7:48 am No comments: