2009, evicted 20 families afflicted with HIV from their homes in the capital, forcing them to move to a tiny 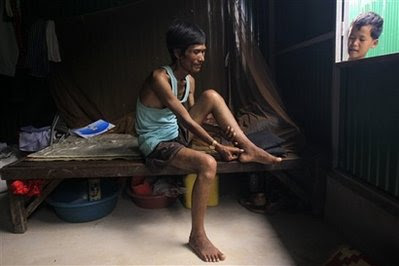 HIV affected Sok Tra, 38, sits in a room at Tuol Sambo village in Phnom Penh, Cambodia, Friday, July 17, 2009. Cambodian authorities, June 18, 2009, evicted 20 families afflicted with HIV from their homes in the capital, forcing them to move to a tiny settlement on its outskirts in an action critics called discriminatory. Tra is among 20 families forced to relocate here.(AP Photo/Heng Sinith) A local Cambodian farmer walks by Tuol Sambo village in Phnom Penh, Cambodia, Friday, July 17, 2009. Cambodian authorities, June 18, 2009, evicted 20 families afflicted with HIV from their homes in the capital, forcing them to move to a tiny settlement on its outskirts in an action critics called discriminatory.(AP Photo/Heng Sinith) 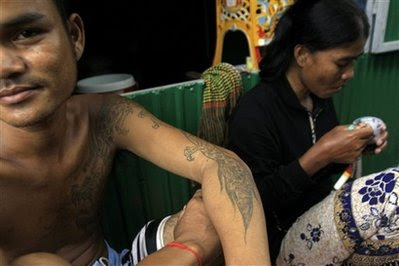 HIV affected Cambodians sit outside their houses at Tuol Sambo village in Phnom Penh,Cambodia, Friday, July 17, 2009. Cambodian authorities, June 18, 2009, evicted 20 families afflicted with HIV from their homes in the capital, forcing them to move to a tiny settlement on its outskirts in an action critics called discriminatory.(AP Photo/Heng Sinith) 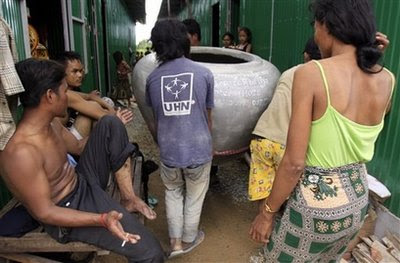 Relocated Cambodians, affected with HIV, carry a huge jar to fill up water at Tuol Sambo village in Phnom Penh, Cambodia, Friday, July 17, 2009. Cambodian authorities, June 18, 2009, evicted 20 families afflicted with HIV from their homes in the capital, forcing them to move to a tiny settlement on its outskirts in an action critics called discriminatory.(AP Photo/Heng Sinith)
Posted by CAAI News Media at 12:33 am No comments:

A Woman Had Been Temporarily Detained for Around Three Years without Any Hearing Yet, and It Is Suspected that Her Case File Had Been Lost

Posted on 18 July 2009
The Mirror, Vol. 13, No. 621
http://cambodiamirror.wordpress.com/
“Banteay Meanchey: A really long waiting continues. A woman is the only [suspected] culprit who has been temporarily detained already for three years and two months in a prison in Banteay Meanchey, but she has not been summoned by the court for a hearing according to legal procedures. A source said that because her case file had been lost, the court has not dealt with her case.

“A source close to that woman told Rasmei Kampuchea on 16 July 2009 that her name is Roeun Sophea, 29 years old, from Palelai village, Poipet; she was arrested on 9 June 2006 and four days later, the Banteay Meanchey court issued a warrant to detain her temporarily in the prison of this province – where she is until now.

“This woman was accused of smuggling 1,130 drug tablets at the above place, and the woman has admitted that she had done what she was accused.

“According to the same source, this woman’s affairs were registered as Case #284, dated 12 June 2006 by the judge Tob Chansereyvuth (now a prosecutor of the Pursat Municipal Court).

“Based on the same source, the woman has never been interrogated about the [suspected] crime, nor has she been informed how long she will be jailed (as she has not yet been prosecuted). The woman has been detained temporarily without knowing how many years the court might sentences her to serve in prison, making her to wait for this information in the prison.”

[It is surprising that the report does not mention at all that the maximum pre-trial period, according to Cambodian law, is six months – after that time a suspect has either to be presented to a court or to be released.] 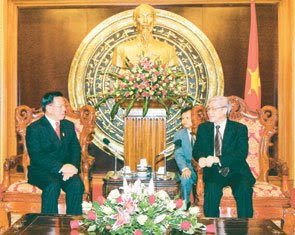 The Vietnam-Cambodia relationship in recent years has been developing unceasingly both in depth and scope, attaining higher efficiency.

Vietnamese National Assembly Chairman Nguyen Phu Trong made the remark while receiving a delegation of the Cambodian National Assembly’s Committee for Foreign Affairs, International Co-operation, Information and Media, led by its Chairman Chheang Vun, in Hanoi on July 17.

Chairman Trong said the two sides should further co-ordinate in order to complete border demarcation and landmark planting by 2012, and to accelerate co-operation programmes and projects.

The two countries also should co-ordinate more at multilateral forums, he added.

On the occasion, Chairman Trong expressed thanks to the Cambodian government and people for their support and assistance in the search for and repatriation of the remains of Vietnamese voluntary soldiers in Cambodia, and in stabilising the lives of overseas Vietnamese.

Chairman Chheang Vun said his country’s achievements in the past struggle for national liberation and the current cause of national construction were inseparable from Vietnam’s valuable assistance.

He briefed his host on the results of his talks with the Vietnamese NA Committee on Foreign Affairs, where the two sides agreed to promote the teaching of the Vietnamese and Cambodian languages and the tradition of friendship and co-operation to benefit the young generations of the two nations.

He also spoke of the necessity to strengthen the co-operation between the Committees on Foreign Affairs of the NA’s of Vietnam, Laos and Cambodia in order to support their Governments in developing their border areas, where a large population of ethnic minority people are living in poverty.

The Cambodian delegation, during their working visit to Vietnam from July 16-27, will attend a conference to be held in Kon Tum province on the legislative body’s role in boosting friendship and co-operation and developing the border areas of Vietnam, Laos and Cambodia.

During their stay in Vietnam, the Cambodian delegation will have working session with the Party Central Committee’s Commission for External Relations, and visit Da Nang city, Kon Tum province and Ho Chi Minh City. (VNA)
Posted by CAAI News Media at 12:27 am No comments:

The additional fund will be used for maintaining and repairing asphalted and laterite roads with a total length of 3,652 kilometers in the cities and provinces in the country, according to a news release of the ministry of Finance and Economy.

Besides the fund for implementing the regular road-maintaining program, the Ministry of Public Works and Transport reserved a budget of 10 billion riel for emergency repairing in case the traffic on the roads is accidentally closed because of the possibility of the damage to the road in unexpected way.

However, the Ministry of Public Works and Transport and the Ministry of Finance and Economy acknowledged that the implementation of the regular road-repairing program is so big because the royal government gained many achievements of road and bridge construction.

Source: Xinhua
Posted by CAAI News Media at 12:25 am No comments: