Long Beach shootings are a mystery 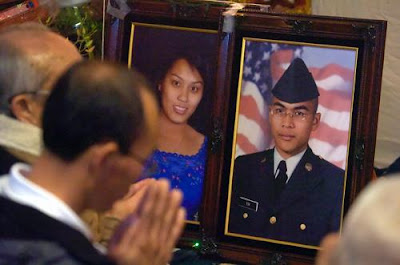 LONG BEACH -- Police had no suspects or any new information Friday afternoon in the double murder of a young couple early New Year's Day.

She encouraged anyone who has information about the shooting of Vannaly Tim, 24, and her boyfriend Sarith Em, 25, who was an Iraq war veteran, to call police homicide detectives at 562-570-7244.

"We are desperately seeking the public's help, anyone who heard or saw anything," Bezart said.
The couple was shot and killed early Thursday morning outside of the apartment they shared with Tim's parents, grandmother and Tim's 5-year-old son.

Family members said Tim and Em had gone outside to move their car because they weren't sure whether there would be street sweeping on New Year's Day, and they didn't want a parking ticket.

An unknown assailant opened fire on them in the street next to their car, hitting Em in the back, family members said. They said one bullet went all the way through Em and hit Tim in the chest, but Bezart said that information hadn't been confirmed by the L.A. County Coroner's Office.

Bezart said the police didn't have an official report yet on how many shots had been fired, at what range or other circumstances of the shooting.

On Thursday, a few more details about the couple emerged, and the family began fundraising efforts to pay for Tim's and Em's burials.

The family wants to bury them side-by-side at Green Hills Memorial Park in Rancho Palos Verdes, where Tim's other grandmother is buried, said Tim's cousin Jackie Thongdy.
Children of immigrants


While Tim and Em were born and raised in Long Beach, both graduating from Wilson High School in 2002, their families had immigrated here from Cambodia.

Tim was the daughter of Thong Tim and Voun Siprasoeuth, Laotians who had been living in Cambodia before coming to Long Beach in the early 1980s, Thongdy said.

Em's father is Seath Em, who emigrated from Cambodia in 1976, Sarith Em's older sister, Soheng Em, said in a brief conversation. She didn't mention the mother.

Like their families, the slain couple were Buddhist, and on Friday the Tim family was visited by local Buddhist monks as the group mourned.

After graduating from high school, Sarith Em enlisted in the Army in December 2002 and began active duty as a combat engineer in March 2003, according to Lt. Col. George Wright, an Army spokesman

Tears roll down the face of Seath Em, a Cambodian immigrant, as he mourns for his Long Beach-born son Sarith. (Steven Georges / Staff Photographer)

Family members said Em had served three tours of duty in Iraq and Afghanistan, though Wright on Friday didn't have access to records of Em's deployment history.

Soheng Em said her brother had left the Army sometime last year, while Tim's family members thought it had been earlier, but Wright said Friday that Sarith Em was still listed as on active duty.

Wright said Em may have had extra paid leave time built up that would have allowed him to exit the Army but still be paid for the remaining leave, thus being considered on active duty.

On Em's MySpace.com page, he had written a phrase that appears to indicate where he was stationed and the battalion in which he served - the 1st Brigade Support Troops Battalion of the 10th Mountain Division at Fort Drum, New York.

Vannaly Tim's cousin Sak Thongdy, left, and sister Debi So, share a solemn moment Thursday at the spot where Tim and boyfriend Sarith Em were shot in the 1800 block of Gardenia Avenue in Long Beach. (Steven Georges / Staff Photographer)

"He was always into sports, and he loved the Army," Soheng Em said of her brother.

She said he also enjoyed playing with his nieces and often would pop in unannounced for a visit.

She said that after leaving the Army, her brother worked at Pelican Products, an international manufacturer of equipment cases and lights based in Torrance. Pelican was closed for business this week and no one could be reached there.

Meanwhile, Tim had worked for three years in the men's shoe department at Macy's in Lakewood Center Mall, her family said.

A co-worker contacted there was clearly upset by Tim's death and didn't want to discuss her friend. paul.eakins@presstelegram.com, 562-499-1278
How you can help

To report information about the shooting of Vannaly Tim and Sarith Em, call Long Beach police at: 562-570-7244

NICHOLAS KRISTOF: The evil behind the smiles

PHNOM PENH, Cambodia - Western men who visit red-light districts in poor countries often find themselves surrounded by coquettish teenage girls laughingly tugging them toward the brothels. The men assume that the girls are there voluntarily, and in some cases they are right.

But anyone inclined to take the girls' smiles at face value should talk to Sina Vann, who was once one of those smiling girls.

Sina is Vietnamese but was kidnapped at the age of 13 and taken to Cambodia, where she was drugged. She said she woke up naked and bloody on a bed with a white man - she doesn't know his nationality - who had purchased her virginity.

After that, she was locked on the upper floors of a nice hotel and offered to Western men and wealthy Cambodians. She said she was beaten ferociously to force her to smile and act seductive.

Sina mostly followed instructions and smiled alluringly at men because she would have been beaten if men didn't choose her. But sometimes she was in such pain that she resisted, and then she said she would be dragged down to a torture chamber in the basement.

``Many of the brothels have these torture chambers,'' she said. ``They are underground because then the girls' screams are muffled.''

As in many brothels, the torture of choice was electric shocks. Sina would be tied down, doused in water and then prodded with wires running from the 220-volt wall outlet. The jolt causes intense pain, sometimes evacuation of the bladder and bowel - and even unconsciousness.

Shocks fit well into the brothel business model because they cause agonizing pain and terrify the girls without damaging their looks or undermining their market value.

After the beatings and shocks, Sina said she would be locked naked in a wooden coffin full of biting ants. The coffin was dark, suffocating and so tight that she could not move her hands up to her face to brush off the ants. Her tears washed the ants out of her eyes.

She was locked in the coffin for a day or two at a time, and she said this happened many, many times.

Finally, Sina was freed in a police raid, and found herself blinded by the first daylight she had seen in years. The raid was organized by Somaly Mam, a Cambodian woman who herself had been sold into the brothels but managed to escape, educate herself and now heads a foundation fighting forced prostitution.

After being freed, Sina began studying and eventually became one of Somaly's trusted lieutenants. They work together, in defiance of death threats from brothel owners, to free other girls. To get at Somaly, the brothel owners kidnapped and brutalized her 14-year-old daughter. And six months ago, the daughter of another anti-trafficking activist (my interpreter when I interviewed Sina) went missing.

I had heard about torture chambers under the brothels but had never seen one, so a few days ago Sina took me to the red-light district here where she once was imprisoned. A brothel had been torn down, revealing a warren of dungeons underneath.

``I was in a room just like those,'' she said, pointing. ``There must be many girls who died in those rooms.'' She grew distressed and added: ``I'm cold and afraid. Tonight I won't sleep.''

``Photograph quickly,'' she added, and pointed to brothels lining the street. ``It's not safe to stay here long.''

Sina and Somaly sustain themselves with a wicked sense of humor. They tease each other mercilessly, with Sina, who is single, mock-scolding Somaly: ``At least I had plenty of men until you had to come along and rescue me!''

Sex trafficking is truly the 21st century's version of slavery. One of the differences from 19th-century slavery is that many of these modern slaves will die of AIDS by their late 20s.

Whenever I report on sex trafficking, I come away less depressed by the atrocities than inspired by the courage of modern abolitionists like Somaly and Sina. They are risking their lives to help others still locked up in the brothels, and they have the credibility and experience to lead this fight. In my next column, I'll introduce a girl that Sina is helping to recover from mind-boggling torture in a brothel - and Sina's own story gives hope to the girl in a way that an army of psychologists couldn't.

I hope that Barack Obama and Hillary Clinton will recognize slavery as unfinished business on the foreign policy agenda. The abolitionist cause simply hasn't been completed as long as 14-year-old girls are being jolted with electric shocks - right now, as you read this - to make them smile before oblivious tourists.
Posted by CAAI News Media at 12:02 am No comments: