via CAAI
Published: 2/01/2011
The Thai Patriots Network has asked the United Nations to help secure the release of seven Thais held in Phnom Penh on charges of illegal entry into Cambodia, and claims to have proof of their innocence.
The network, led by Somboon Thongburan and allied to the People's Alliance for Democracy, gave a petition to the UN at its regional headquarters on Ratchadamnoen Avenue yesterday.
The petition included a copy of land title deeds and receipts of tax payments on the land, which is said to prove that the Thais, including Democrat MP Panich Vikitsreth, were actually arrested on Thai soil in Khok Sung district, Sa Kaeo.
Mr Somboon said the land belonged to Khem Paengsungnern and was connected to border marker No 46, and the Thais were about 300m from the border mark when they were arrested last Wednesday.
This contradicts findings by the Thai Foreign Ministry, which admitted earlier that the Thais were about one kilometre inside Cambodian territory at the time of the arrest.
Thai ambassador to Cambodia, Prasas Prasasvinitchai, has visited the seven Thais at Prey Sor prison on the outskirts of Phnom Penh.
The detainees are poised to meet family members when Cambodian officials resume work after New Year.
Chavanond Komalayasut, secretary to the Thai foreign minister, said Mr Panich's wife, Patchareeporn Vikitsreth, left Bangkok yesterday for Phnom Penh, where she will wait for approval for the prison visit.
Lawyers plan to file bail requests to the court for the Thais as soon as the court resumes duty next week.
Posted by CAAI News Media at 10:43 pm 1 comment:

Yellows to rally against Cambodia in Sa Kaew

via CAAI
Published: 2/01/2011
Members of the yellow-shirt people group and the Thailand Patriot Network will hold a protest in the eastern province of Sa Kaew on Tuesday, Jan 4, to call for a the release of detained seven Thais, core leader of the network Chaiwat Sinsuwong said in a press conference on Sunday.
The yellow-shirt supporters of the People’s Alliance for Democracy and the Thailand Patriot Network are now staging protest against the government in front of Government House for failing to rapidly seek the release of their leaders and colleagues being jailed in Cambodia.
Mr Chaiwat said the Tuesday rally against Cambodian government will be held on Sripen road in Sakaew province.
“The yellow-shirts will continue rallying in front of Government House on Monday, Jan 3, and on Tuesday, they will regroup at the venue in Sa kaew as planned”, He said.
He expected at least 5,000 yellow-shirts would join the planned anti-Cambodian government rally.
Posted by CAAI News Media at 10:42 pm No comments:


Published Date: 02 January 2011
By Emma Cowing
EIGHT years ago, Edinburgh-born Scott Neeson was one of the most powerful men in Hollywood, with a 36ft yacht, a mansion and a $1.5 billion (£960 million) budget overseeing the release of blockbuster movies including Braveheart, Titanic and X Men.
Today he lives in the slums of Phnom Penh, where he has dedicated his life to turning round the fortunes of Cambodia's poorest children.
Now Neeson is bringing his charity, the Cambodian Children's Fund, to the UK. Previously active in America - where Neeson has used his Hollywood connections to attract big name investors including media mogul Sumner Redstone - he is now hoping to attract donors from his homeland to help poverty stricken Cambodians living in some of the world's most deprived conditions.
Neeson first visited Cambodia in 2003 during a sabbatical from his glitzy Hollywood lifestyle, where he was president of 20th Century Fox International and on first name terms with A-list stars such as Tom Cruise and Harrison Ford.
"I finished up my contract at Fox in July 2003 and was starting a new contract five week later with Sony Pictures," he told Scotland on Sunday this weekend.
"It had been a very stressful few years with movies like Titanic and Braveheart and I went travelling in Asia. I ended up in Phnom Penh and while I was there I was taken to see the garbage dump just outside the city. That turned my whole life upside down."
Neeson was so shocked by the poverty-stricken conditions he saw, where more than 1,000 children lived and worked on the rubbish dump, that he wanted to move there immediately and do what he could to help.
"I was certain at the time I wanted to do this but I was 45 years old and wondered if it could be a middle aged crisis, so I made myself a promise. I'd give myself 12 months back in Los Angeles in my new job before I did anything rash. Twelve months to the day I resigned and came over here," he said.
"It really was a calling, something I felt I could do, something I was good at. Really, it's about what you want your life to be about. That was the most important part for me."
Initially the charity helped change the lives of 45 children who lived and worked in the city's notorious rubbish dump. "What we have now is close to 1,000 children either in direct school or using our services and we also have families, parents and siblings who are living in squalor that we are trying to help," he said. "You'd be amazed how similar the problems are here with those of a Western family
It's just that the circumstances are more extreme."
Speaking from Cambodia, Neeson, who moved from Scotland to Australia with his family as a child, said: "We're moving towards a programme of trying to link communities and have more engagement with the UK. What I'd love to see is families in Scotland sponsoring families here in Cambodia, and having that human contact with whole families across the world."
Since the launch of the charity in 2004, the Cambodian Children's Fund has come to the aid of more than 700 children from Phnom Penh's slums, through teaching programmes and helping families climb out of poverty through work and employment schemes and food programmes. The charity also runs an active sponsor project that allows donors to sponsor individual children or families.
The charity launched its UK arm in December and now has a base in London overseeing its UK operations. Its patrons include Michael Mansfield QC. And Neeson is also exploring the possibility of bringing a children's dance troupe from the charity to this year's Edinburgh Festival Fringe.
"I used to come back to Scotland every 18 months or so but since I've been in Cambodia I haven't had the opportunity. I'm thinking about getting across for the 2011 Fringe with the dance troupe - it would be an amazing experience for the kids."
Neeson says that, although he hasn't lived in Scotland since he was a child, he still retains a Scottish identity.
"I've always felt Scottish. I went back to Scotland in my early 20s and went up the West Highland Way and it's a stunning country, it really is amazing. I consider myself a Scot."
He acknowledged that, with the economic downturn, not everyone may have the means to dig deep into their pockets for a charity that helps people half way round the world.
"It depends on what you want out of life. Most definitely things are tough at the moment, particularly in Scotland with the high unemployment rate, it's hard. But there's nothing worse than this place - anyone who sees it can see that. If you truly want to help then give what you can. Five pounds here will buy enough rice to feed a family for two weeks. It's all relative."
Neeson, who still goes back to Los Angeles several times a year but says he won't move back there, says the most rewarding part of his job now is also the most simple.
"It's seeing the difference you can make to a child who has been through things so awful you just couldn't even describe them. Within two months of coming here you've got this whole new child with a sparkle in their eye. They laugh and play and you can see that change. That's what it's all about."
Posted by CAAI News Media at 10:37 pm No comments:

Posted by CAAI News Media at 8:02 am No comments:

via CAAI
Published: 1/01/2011
Online news:
Thailand Patriot Network representatives on Saturday submitted a letter to United Nations Secretary-General Ban Ki-moon, asking for justice, humanity and to respect the civil rights of seven Thais currently detained in Cambodia.
The group, led by Somboon Thongburan and Tossapon Kaewtima, left the letter with a United Nations security officer at the world body's Bangkok office on Ratchadamnoen Road.
The seven detained Thais, including Democrat Party member of parliament Panich Vikitsreth and members of the Peoples Alliance for Democracy (PAD) protest movement, also known as yellow shirts.
They were apprehended by Cambodian troops along the Thai border with Cambodia's Banteay Meanchey province. Cambodia said the seven Thais intruded onto its soil, a claim that has not been contested by Thai authorities.
The Patriot Network took land documents to the UN office. According to the Network activists, a temporary office of the United Nations High Commissioner for Refugees (UNHCR) was located there in 1977-1978 during the war in Cambodia at Boundary Marker No 46, currently in the area of Thailand's Prachin Buri, the province adjacent to Sa Kaeo. (Agencies)
Posted by CAAI News Media at 7:38 am No comments: 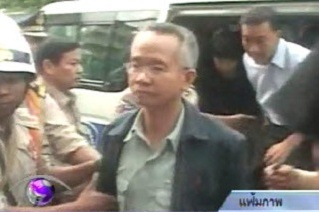 via CAAI
BANGKOK, Jan 1 – The Thai government has assigned officials to inspect the area where seven Thais were taken into custody by the Cambodian army Wednesday to gather information to contest a court trial in Phnom Penh, Secretary-General to the Foreign Minister Chavanont Intarakomalsut said on New Year’s Day.
The investigation by the Ministry of Foreign Affairs and Royal Thai Survey Department will determine if the group intruded into Cambodian territory and how far. If they trespassed as far as one kilometre as said in some news report, it is deemed an offense, Mr Chavanont said.
The Thai government continues to help seven Thais including Bangkok Democrat MP Panich Vikitsreth and members of the so-called 'Yellow Shirt' People's Alliance for Democracy (PAD) protest movement after they were detained by Cambodian troops Wednesday as they inspected the border of Thailand’s Sa Kaeo province and Cambodia's Banteay Meanchey province.
They have been held in prison after they were charged by the Court with illegal entry and illegally entering a military base along the border, crimes which in Cambodia carry penalties of up to six months and one year, respectively.
MP Panich’s wife Phachareeporn Vikitsreth on Saturday flew to visit her husband. It was expected that she would be allowed to see him in one or two days.
Mr Chavanont said next week when the case is brought to court, it will become clearer and the Thai-retained lawyer can seek bail immediately. It depends upon the court whether to grant bail or not.
The Thai government is not ignoring to help the seven detainees. Foreign Minister Kasit Piromya met his Cambodian counterpart Hor Namhong seeking cooperation and Prime Minister Abhisit Vejjajiva is concerned and ordered securing their quick release.
However, the issue will not have an impact on the relations of the two countries, the secretary-general said. (MCOT online news)
Posted by CAAI News Media at 7:37 am No comments: