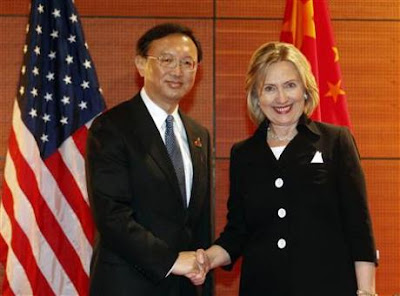 
(Reuters) - Secretary of State Hillary Clinton sought clarification about China's policy on exporting rare earth minerals and received assurances from its foreign minister, Yang Jiechi, a U.S. official said on Saturday.
"Secretary Clinton's sought clarification on the Chinese government's policy on the export of rare earth minerals and received assurances," said the official, who spoke on condition he not be identified, after Clinton and Yang met in Hanoi.
Be sensitive to our core issues: PM to Wen

Posted by CAAI News Media at 7:26 am No comments: 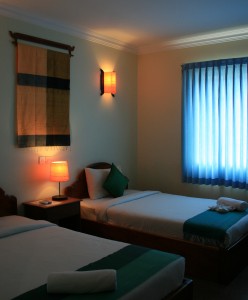 
The Golden Mango Inn was built by a couple in Siem Reap with the simple idea of providing their family with a means of livelihood. This little quaint guesthouse is family run and has commendably incorporated a rudimentary CSR model based upon local sustainability. The inn has 24 rooms making it quiet small compared to many of the bigger enterprises in Siem Reap. This automatically means that resource consumption is lower. Apart from the management team who are close family, they have 11 employees whom they employ on an incremental salary basis.
In this little inn, in a little town in Cambodia I am surprised to find notices on how to regulate the temperature settings on the air conditioning to save energy and methods to save water. In addition to a lot of traditional Cambodian art & craft, I also notice CFL bulbs and the general greenery around the property. When I spoke to Wann, one of the owners about sustainability efforts with their staff he said, "We meet all the staff once a week and one of the topics we discuss is getting them to understand more about the environment."
The restaurant adjacent to the guesthouse serves some really delicious food. I learnt that they grow some of their vegetables in their backyard, buy from farmers who use minimal amounts of pesticide and usually grown with traditional Cambodian fertilizer. The fish and eggs are locally sourced in Cambodia but some meats are imported. To their credit however, the number of meat dishes in their menu is comparatively lesser than seafood items. 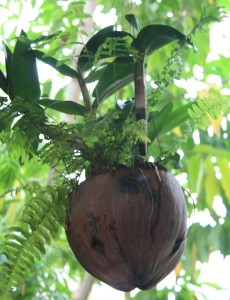 They are also planning on expanding green cover on their property by planting more trees and flowering plants. They have a little fish pond in a large stone urn with thriving water plants and quite a lot of birds, butterflies and bees on the property. They have also associated themselves with one of the children's hospitals in Siem Reap called Angkor Hospital for Children. They donate 30% of their postcard sales to the hospital as well as have a donation box in the reception area. On top of all that, they treat their guests with a personal touch, offer you complimentary fruit and juice upon arrival!
Very often when CSR is talked about, its always about the bigger enterprises and big companies. Smaller businesses are also taking part in a very quiet CSR-revolution which is heartening to note. Small enterprises have a huge advantage of incorporating the models of CSR into their business very early on in the conception stage. They also have a direct relationship with the local community and in most cases are aware of environmental impacts.
Whilst talking about CSR, it is very easy to ignore the smaller places but it would be folly to do so. There is so much big businesses can learn about intrinsic sustainability from the smaller players.
Photos Top: Our room at Golden Mango. Bottom: A hanging plant holder made out of a coconut. Akhila Vijayaraghavan©
Posted by CAAI News Media at 7:20 am No comments: 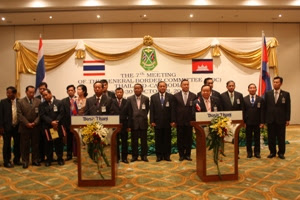 
PATTAYA, Oct 30 -- Cambodia and Thailand agreed Saturday to cooperate on allowing their peoples to cross the border freely, removing landmines and to oppose every type of terrorism affecting the neighbouring countries.
The agreement was made following the end of the seventh General Border Committee (GBC) meeting co-chaired by Thai Defence Minister Gen Prawit Wongsuwan and his Cambodian counterpart Gen Tea Banh. The meeting was held in Thailand's eastern resort of Pattaya.
Both men told a press conference after the 20-minute meeting ended that seven major issues were agreed at the meeting.
Improved cooperation will take place by giving easier access to the nationals of both countries to cross the border; labour cooperation; exchanging information; demining and destroying landmines which have been planted along the Thai-Cambodian border; maritime safety; reducing tensions through negotiations and opposing terrorism; and cooperation on trade, agriculture, public health, tourism, environment, education, religion and culture.
The two countries have been locked in a troop standoff at their disputed border since July 2008, when the ancient Preah Vihear temple was granted UNESCO World Heritage status.
The World Court ruled in 1962 that the temple belonged to Cambodia, although its main entrance lies in Thailand. The exact boundary through the surrounding grounds remains in dispute, with occasional military skirmishes claiming a number of lives.
Gen Tea Banh, also Cambodia’s deputy prime minister, was rushed to a hospital immediately for treatment of cholecystitis after the press conference ended.
The Cambodian official began suffering pain after playing a round of friendship golf on Friday. (MCOT online news)
Posted by CAAI News Media at 7:10 am No comments: 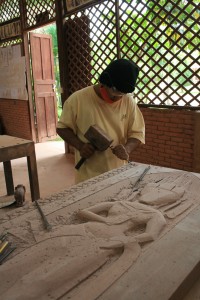 
Artisan d'Angkor was originally an off-shoot of Chantiers-Ecoles de formation professionnelle, a professional training school, which was founded to help young Cambodians rediscover traditional handicrafts. The CEFP is a public institution which was established in response to an urgent need to train disadvantaged young people with little formal education, living for the most part in rural areas, and offer them a job entry program.
Artisan supports these efforts in show casing traditional Cambodian art & craft. They also undertake the training of 47 craftsmen and the company employs about a 1000 people of which 5% are disabled. The business model is based on fair-trade and ethical consumerism. They have also pioneered a new social policy in Cambodia. The craftsmen's associated owns a 20% share in the company.
Cambodia's famous art of stone-carving is featured at Atrisans using only natural stone. The wood used for wood-carvings is environment-friendly from rubber trees from the Rattanakiri, Mondolkiri and Kapong Cham province. They also train artisans in silk-weaving and they use natural dyes in the process of creating their exquisite scarfs and shawls.
With an Artisans' product you know that you investing a piece of ethical consumer gold. Not only is it fair trade but it has also received one of the highest levels of sustainability in its production of these crafts. The expert panel from UNESCO recently awarded two Artisans d'Angkor items with the "Seal of Excellence for Handicrafts". This award is granted to product which meets high standards of quality, innovating, cultural authenticity, as well as social and environmentally responsible production.
From the main Artisan's shop in Siem Reap you can visit a silk farm where you can observe artisans harvesting silk threads. Other than a shop in Phnom Penh and Siem Reap they have also recently opened shops in both airports. If you are ever in Cambodia and happen to miss visiting the main shop, you can always have a wee browse through the shops in the airport. Although the collections are not so extensive, their space in the airport is tastefully decorated just as the city shops are.
Posted by CAAI News Media at 7:07 am No comments:


BANGKOK - CAMBODIA'S Defence Minister Tea Banh was hospitalised in Thailand on Saturday because of pains caused by gallstones, Thai officials said.
Mr Tea Banh is expected to stay at a Bangkok hospital for one or two days, Thai Defence Minister Prawit Wongsuwon told AFP, adding that his condition was not serious.
He was in Thailand to attend a meeting on border relations in the coastal resort city of Pattaya, about a two-hour drive from Bangkok, at which the two nations agreed to boost cooperation on migration and landmine removal.
According to the Thai government-owned news website MCOT, Mr Tea Banh began suffering pain after playing a round of golf on Friday but continued with the meeting. -- AFP
Posted by CAAI News Media at 7:03 am No comments: 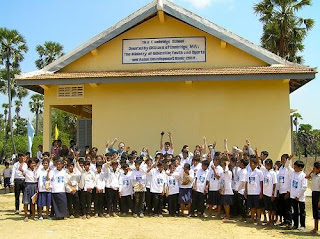 By Lucy Flamm
Wicked Local Cambridge
Posted Oct 30, 2010
via CAAI
Cambridge — Coming up on Sunday, Nov. 7 is a benefit dinner to support the Cambridge School in Cambodia. The Cambridge School in Cambodia is a school near Phnom Penh in Cambodia that was built by the Cambridge for Cambodia organization, a volunteer group of Cambridge students and citizens. Three years ago, our community raised $24,000 to build a school in rural Cambodia. This number is made even more significant by the fact that this money came from the Cambridge community. Penny drives, bake sales, an online auction, a film benefit at Harvard, and benefit dinners at The Elephant Walk restaurant raised this large sum. And now, the Cambridge School in Cambodia exists in the village of Kauk Rovieng in Cambodia. Last February, 13 Cambridge citizens, including two teachers and eight students from our high school and middle schools (including myself) travelled to the school for the official dedication. We brought the students supplies – among them the ever-popular Harry Potter and the Sorcerer’s Stone translated into Khmer. We received a very big welcome by the entire village and learned a tremendous amount.
On Sunday Nov. 7, we will be holding another benefit dinner at The Cambridge Elephant Walk restaurant. All money raised from the ticket sales will go towards the funds needed each year to support the high tech education that includes instruction with two desktop computers that have internet access. The money is donated to our school through the American Assistance for Cambodia – the same non-profit organization that built our school and more than 450 other schools in Cambodia. The Cambridge for Cambodia organization also aims to raise enough funds to purchase two more computers for the Cambridge School, as well as the solar panels needed to power them. Our goal is to not only bring education to the village of Kauk Rovieng, but also technological advancements.
Last February during school break, a group of us travelled to Cambodia. We delivered medical supplies to local hospitals, visited the school, and met with local advocates working to address important social issues existing in Cambodia today. Among them was, Somaly Mam, known world-wide for her fight against the sex trade industry. Students from this trip, including myself will be there at the event on November 7th to share our stories with those who attend. We will also have a film and slide shows from our amazing journey.
It is our hope that people in the Cambridge community will join us again to support our school in Cambodia. Tickets for the event can be bought online at www.elephantwalk.com. We are grateful to the many Cambridge businesses who have joined in our efforts to create this school in Cambodia. We’ve learned a lot from our travels and benefited along with the Cambodian students. If you want to learn more about our volunteer project, please visit our website: www.cambcamb.org. The Elephant Walk restaurant is providing a delicious traditional Cambodian meal for our benefit. We hope to see you there!
Lucy Flamm is currently senior at The Cambridge Rindge and Latin School in Cambridge.
Posted by CAAI News Media at 7:01 am No comments: