Another temple caught in border war 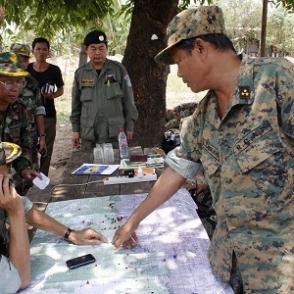 A commander of Cambodian Royal Armed Forces gives instructions at a camp in the disputed area in Oddar Meanchey province (AP)
http://www.independent.ie/


via CAAI
Tuesday April 26 2011
Fighting between Thailand and Cambodia has spread to a third temple as the countries exchanged artillery fire in border clashes that have turned 50,000 villagers into refugees.
The battles near the 11th century Preah Vihear temple followed unsuccessful international attempts to secure a cease-fire in the largely long-distance artillery duels that erupted on Friday at two other temples about 100 miles to the west.
Preah Vihear was the scene of four days of deadly fighting in February and is the most prominent symbol of a border dispute between the nations that goes back generations and has long stirred nationalist sentiment on both sides of the frontier.
The latest round of fighting began around the 1,000-year-old Ta Moan and Ta Krabey temples, which are on territory claimed by both countries. Since then, at least 12 soldiers on both sides have been killed and some 50,000 villagers forced to flee.
Each side has accused the other of starting the battles.
The US has thrown its support behind efforts of Indonesia, current chair of the Association of Southeast Asian Nations, to mediate an end to the conflict.
Secretary of State Hillary Clinton urged both sides to exercise restraint and act to reduce tensions.
Thailand has so far rejected outside intervention, saying the two countries have to resolve the dispute alone. But on Sunday, Thai Foreign Minister Kasit Piromya indicated that Bangkok might accept Indonesian military observers at the border, a proposal already accepted by Phnom Penh.
That would probably need behind the scenes approval from Thailand's powerful military, which so far has effectively vetoed the plan to bring Indonesian observers.
Some have accused the Thai army, which staged a coup in 2006 and continues to hold influence in domestic politics, of using the border dispute to raise its profile ahead of general elections expected by early July.
Press Association
Posted by CAAI News Media at 12:15 am