Are Cluster Bombs Still in Use in Thai-Cambodian Fighting? 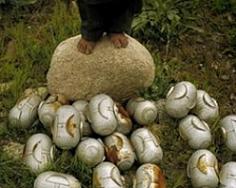 
There are serious reports, but unconfirmed by independent observers, of the use of cluster weapons by Thai forces in the Good Friday, April 22, 2011, attack on Cambodian forces. This would be a direct violation of the ban on cluster weapons although neither Thailand nor Cambodia has ratified the 2008 Convention on Cluster Munitions. Laos is the only Southeast Asian State to have ratified. However, 108 States have signed the Convention and 56 have ratified by March 2011. Such a large number of signatures makes the Convention a central element of customary humanitarian law even if a State has not signed it.(1)
The early morning Good Friday fighting between Thai and Cambodian troops took place near the ancient temples of Ta Krabey and Ta Moan Thom, some 150 kilometres southwest of the better-known 900 year old Preah Vihear Temple where fighting had broken out in February 2011. There have been repeated clashes around the Preah Vibear Temple, especially after 2008 when UNESCO enshrined Preah Vibear as a World Heritage site for Cambodia over Thai objections. The World Court had in 1962 decided that Preah Vibear was on the Cambodian side of the frontier. However, the only roads for easy access to the temple are from Thailand.
The new round of fighting, which continued on Saturday April 23rd, along with the evacuation of the population of villages near the frontier, indicates that the situation remains volatile. The villages on the Cambodian side are relatively densely populated so that unexploded cluster weapons make farming difficult. Farming is the only civilian activity of the area, and the loss of livelihood is an emotional issue on which Cambodian officials can play.
The fighting in February 2011 had been brought for mediation to a meeting of the Foreign Ministers of the Association for South East Asian Nations (ASEAN). Indonesia which currently holds the rotating chairmanship agreed to send military observers to the frontier area. However, they have not yet been sent, and Thai officials considered them unnecessary.
There have been suggestions that the renewed fighting is part of planning by factions within the Thai military in light of June legislative elections. There have even been suggestions that the fighting is a prelude to a military coup in Thailand. Obviously, there is no way to analyse motivations and tactics within the Thai Army. The fighting can also be a flair-up among nervous soldiers posted along the frontier and may have no lasting consequences.
However, the accusations of the use of cluster weapons pose clearly the issue of the investigative and complaints procedures of the 2008 Convention on Cluster Munitions. Since the negotiations in the Conference of the Committee on Disarmament (CCD) during the 1969-1970 session on the convention banning the placement of nuclear weapons on the sea-bed (the Sea-Bed Treaty), the formula for investigation and complaint has been “appropriate international procedures.” “Verification pursuant to this Article may be undertaken by any state party using its own means, or with the full or partial assistance of any other state party, or through appropriate international procedures within the framework of the United Nations and in accordance with its Charter.”
At the time “appropriate international procedures” represented the highest common denominator of agreement between those CCD members led by Canada which wanted the verification procedures laid down in the treaty to accord a leading role to the UN Secretary-General and those led by the Soviet Union, which wanted verification to be the exclusive responsibility, within the UN, of the Security Council. To this day, verification procedures and follow-up sanctions in arms control treaties have always remained vague.
Now, in the same month, there have been two accusations of violations of the cluster weapons convention. The NGO Human Rights Watch has released a report that cluster weapons made in Spain have been used by Libyan Government forces in the attacks on Misrata, the vital seaport. The strength of international humanitarian law and of arms control treaties lies in their application and in the way that accusations of violations are treated. The case of Libya and Thailand is crucial, and we need to watch how “appropriate international procedures” are applied.
Posted by CAAI News Media at 10:37 am