Postgrads with designs on future 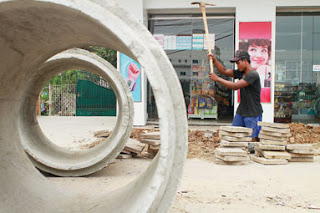 Photo by: Pha Lina
Construction problems could be minimised with more consultation with local people, discovered engineering graduate Oung Ponnaka while studying for a master’s degree in Australia.
http://www.phnompenhpost.com/


Meet the new breed of educated Cambodians dedicated to rebuilding the Kingdom and improving the lives of its people – postgraduates who have returned from their studies in Australia.
Scholarships from the Australian government have enabled about 440 Cambodians to undertake further university study in Australia over the past few years, according to Ambassador Penny Richards.
Health, rural and international development, HIV and AIDS, social services, environment, finance, management and education are the sectors which will benefit from the scholarship programme.
Recent postgraduates agreed that their new skills would help redevelop Cambodia across all sections of society, at a gathering to honour their achievements at the Australian Embassy in Phnom Penh.
Twenty-five returnees met with embassy officials at the event.
Typical of the new breed is Oung Ponnaka, 40, who is the technical chief of the Department of Rural Development in southeast Svay Rieng province.
He sees fundamental challenges ahead in development, particularly in building roads, bridges, irrigation projects and other infrastructure in the provinces.
An engineer who gained his bachelor’s degree at the Institute of Technology in Cambodia, Oung Ponnaka studied for a master’s degree in technology at Swinburne University in Australia.
Construction projects here often run into opposition from local people, he finds, because many engineers design projects without consulting the intended users, he says.
“Because the people are the [intended] users of our construction projects, we have to design them to fit their needs. Many Cambodian engineers think of themselves as technicians, so they feel they should decide priorities. But we should listen to the people too,” says Oung Ponnaka. 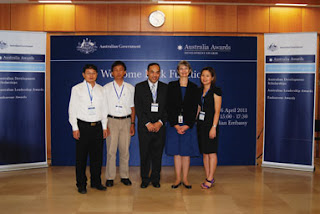 Photo by: Roth Meas
Postgraduate So Thea, second from left, was among previous graduates from Australia to meet Ambassador Penny Richards in Phnom Penh.
Part of the problem, he feels, is that the Cambodian education system is not based on group discussions, so graduates are not used to consulting other people on their projects.
“But in Australia, students learn to work in groups and discuss the consequences of construction, so engineers have the chance to integrate their ideas together,” he explains. Allowing local people to have their say on projects that affect them could cut protests and allow effective solutions, he feels.
Cambodia’s forestry industry and its treasure trove of hardwoods inspired So Thea, 42, to complete his PhD in biological science at Murdoch University.
His four years of study focused on forestry and the problems of illegal logging in Cambodia, while he searched for ways of making timber plantations sustainable.
His mission is to conserve Cambodia’s forests for the next generation, especially by studying ways to replant valuable native hardwoods such as kronhoung, beng, socrom and kokoh.
“These valuable timbers are vulnerable to illegal logging, [and] take up to 50 years to grow to maturity,” he says. As vice chief of the Forest Research Institute in the Ministry of Agriculture, Forestry and Fisheries, his task is to increase replanting schemes in order to conserve the timber.
A tree with a trunk thicker than one metre could be at least 250 years old, he explains. “To lose a tree like that is a big [loss]. It’s [encouraging] that the Cambodian government is interested in forestry.”
As part of his research, So Thea visited Western Australia and Thailand to study forestry techniques.
Ambassador Penny Richards says the scholarships were provided to give Cambodians the skills and knowledge to contribute to the long-term development of Cambodia.
She told the postgraduates: “Now that you have returned to Cambodia, we look forward to seeing the contribution you will make in your various ministries. Australia is committed to promoting higher education as a means of improving the economic and social development of Cambodia.”
Most students returned to their successful careers in government, private sector and non-profit organisations, she said.
This year, Australia will award up to 50 scholarships to Cambodian students undertaking master’s degrees.
Further information about scholarships is available at www.australiaawards.gov.au.
Posted by CAAI News Media at 10:11 pm