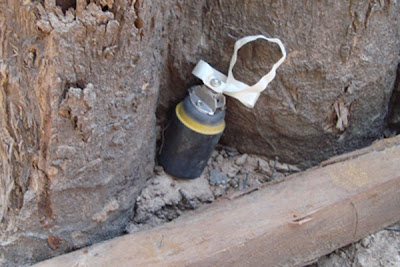 Landmine experts yesterday expressed concern that ongoing border violence could hamper de-mining efforts, as statistics revealed that casualties resulting from mines and unexploded ordnance dropped slightly in the first quarter of this year.
A total of 61 people were killed or injured from January to March this year, compared with 62 over the same period last year, according to figures from the Cambodia Mine/ERW Victim Information System.
Leng Sochea, deputy-secretary general of the Cambodian Mines Action Authority which collects the data, said yesterday that overall figures were “stable” but ongoing border clashes between Cambodian and Thai troops in the border provinces could affect de-mining efforts.
“People are moving away from this area and maybe some de-miners are moving away,” he said. “If we have no proper measures to take the UXO out of the villages maybe it will ... cause the number of casualties to increase next month.”
According to CMVIS data, there was a 20 percent increase in casualties last month, with 24 people killed or injured compared with 20 reported casualties in March last year.
Heng Rattana, director-general of the Cambodian Mine Action Centre, said yesterday that he was not satisfied with the figures.“The high casualty districts are along the border and the fighting [between Cambodia and Thailand] occurs in those areas,” he said. “This creates a difficult environment for us to work and we decide to cease operations and move to areas further from the border.”He added that CMAC wanted “zero victims”.
The provinces with the most recorded casualties resulting from mines and UXO between January 2010 and March this year are Battambang, Banteay Meanchey, Pailin, Preah Vihear and Oddar Meanchey provinces, all of which are located on the Thai-Cambodian border.
Earlier this month, United Kingdom-based group Cluster Munitions Coalition said it had evidence that Thailand used cluster munitions – which break up into bomblets that often lie dormant for years before exploding – during border clashes with Cambodia in February. Thailand has disputed that the weapons found are classified as clusters, an opinion anti-landmine groups reject.
Posted by CAAI News Media at 10:57 pm