Fighting near Preah Vihear and in Surin


via CAAI
Published: 26/04/2011 at 04:13 PM
Online news: Asia
Thai and Cambodian soldiers clashed on Tuesday afternoon in the disputed area around Preah Vihear temple on the border in Kantharalak district of Si Sa Ket province, and again on the border in Surin province.
The fighting began about 1.30pm, with sounds of fierce exchanges involving both small arms and heavy weapons, local reports said.
Continuous gunfire could be heard from the area near Wat Kaew Sika Khiri Savara, around the Preah Vihear temple and Phu Makhua.
The violence reportedly erupted after Cambodian soldiers at Wat Kaew Sika Khiri Savara opened fire at a Thai F16 fighter which was flying along the Thai-Cambodian border.
Second Army spokesman Prawit Hookaew said 10 Thai soldiers were wounded in an earlier clash today on the border in Surin province.

F-16 fighters (Photo by Somchai Poomlard)
Col Prawit said the fighting occurred between 3.20am and 5am, when Cambodian soldiers tried to capture Ta Kwai and Ta Muen Thom temple ruins but were repulsed.
Renewed fighting was reported in the afternoon as the two sides exchanged heavy fire near Ta Muen Thom temple from about 3 pm. Clashes were also reported near Ta Kwai temple and Chong Krang border pass in northeastern Surin province.
There were no reports of death or injuries from either side. In late afternoon the sound of artillery fire was still being heard.
Col Prawit said there are now civilians including women and children staying among Cambodian soldiers at all operational bases around Preah Vihear temple so Thai soldiers have to be more careful to make sure they do not shoot civilians.
"I can assure you that we can protect our sovereignty with our border defence forces.
"Negotiation is out of the question because every movement on the Cambodian side is commanded solely by (Cambodian Prime Minister) Hun Sen.
"Last night seven or eight artillery rounds were fired as us across the border and one of them landed seven or eight kilometres inside Thai territory, near Phanom Dong Rak hospital," Col Prawit said.
The spokesman said the 2nd Army has sufficient military strength to cope with the situation without having to call for reinforcements.
Dr Kamron Chaisiri, a Zone 14 public health inspector, said 10 Thai soldiers suffered minor injuries in the Surin clash early this morning.
They were admitted to Veerawat Yothin military hospital in Surin.
The incident brought the number of wounded up to 42 on the Thai side since the fighting began on Friday, while the death toll remained at five, he said.
Meanwhile, Prime Minister Abhisit Vejjajiva has instructed all ministries to review all areas of their cooperation with Cambodia. 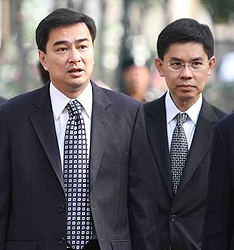 Prime Minister Abhisit Vejjajiva (left) and acting government spokesman Panitan Wattanayagorn (Photo by Pattanapong Hirunard)
Acting government spokesman Panitan Wattanayagorn said the cabinet passed a three-part resolution today:
- Retaliatory militarily action to push Cambodian soldiers out of the disputed area.
- Diplomatic efforts to bring Cambodia back to bilateral talks.
- All ministries are to review work plans and mechanisms involving cooperation with Cambodia.
Mr Panitan said the government has important evidence to be presented in talks to bring about an end to the conflict.
The evidence will also be used to explain the situation to the international community.
He believed the situation would improve after the leaders of Thailand and Cambodia meet at an Asean meeting in Indonesia next week. Foreign Minister Kasit Piromya also has an appointment with Asean chairman Marty Natalegawa on April 28.
"Thailand will inform the Asean chair that Thailand agrees to international observers but Cambodian troops must withdraw from Preah Vihear," Mr Panitan said.
The government will continue to provide security for the people and take steps to prevent the conflict from escalating further, although Cambodia has shown the intention to do otherwise, he said.
Mr Panitan stressed that the government and the military do not have a conflict of policy.
Even when it becomes a caretaker government following a House dissolution, it will be able to keep the situation under control, he added.
This point was also made by Deputy Prime Minister overseeing security Suthep Thaugsuban.
He said a continuation of the border conflict would not disrupt the approaching general election.
"Even if the border conflict continues once the government is only in an acting role [after a dissolution], there won't be any constraints or disadvantages because the acting government can perform its duty and still has the full authority to command," Mr Suthep said.
When reporters asked the deputy premier how the border problem would be solved if Cambodia refused to negotiate, he said there will be negotiations when Cambodia is ready.
Thailand will not invade its neighbour's territory, but at the same time the army must protect the country's sovereignty, he said.
The government will not close all Thai-Cambodian border checkpoints as people living along the border in both countries would be affected, he said.
"I don't know why Cambodia wants to capture the Ta Kwai temple ruins. It could be that Prime Minister Hun Sen wants to promote his son [Hun Manet] or create a new hero. I don't want to talk further about this," he said.
Mr Suthep also said he did not believe rumours that Cambodian Prime Minister Hun Sen has cancer.
Army spokesman Sansern Kaewkamnerd said the Cambodian army has suffered more losses than the Thai military in the clashes.
"The Thai army is not on the defensive. When they fired five, we fired 20 back," he said.
Cambodia had suffered 10 times the losses of the Thai forces, he said, but the Thai army did not want to invade because it would then become a full-scale war.
He did not give actual details of the Cambodian losses.
US Secretary of State Hillary Clinton on Monday urged Thailand and Cambodia to show restraint and said Washington was "deeply concerned".
She said that the United States had engaged directly with Thai and Cambodian officials in hopes of ending the violence, without providing further details.
Posted by CAAI News Media at 12:01 am