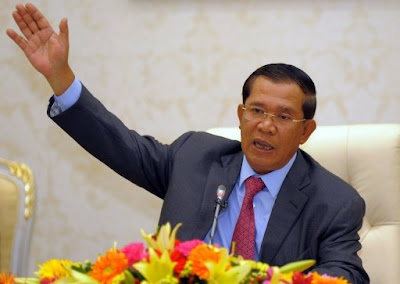 "Cambodia is appealing for a ceasefire," the country's Prime Minister Hun Sen has said

via CAAI
PHNOM PENH — Cambodian Prime Minister Hun Sen on Wednesday called for a truce with Thailand as border clashes that have left 14 people dead on both sides entered their sixth day.
"Cambodia is appealing for a ceasefire," the premier said in a speech in the Cambodian capital Phnom Penh, adding that he was ready to hold talks with his Thai counterpart at a regional summit in Jakarta in early May.
Planned truce talks were abruptly cancelled after Thailand's defence minister pulled out of a meeting with his Cambodian counterpart which had been scheduled to take place in Phnom Penh on Wednesday.
Posted by CAAI News Media at 10:34 pm