Cambodia rules out dialogue with Thailand 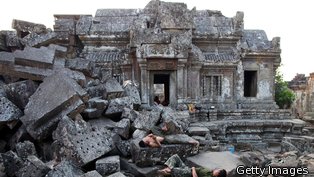 
Thailand has pressed for talks with Cambodia as troops from both sides fought with short-range rockets and guns near 900-year-old Preah Vihear temple.
Thailand has pressed for talks with Cambodia as troops from both sides fought with short-range rockets and guns near 900-year-old Preah Vihear temple.
Thai and Cambodia troops fought with short-range rockets and guns near 900-year-old Preah Vihear temple, opening a second front in a five-day confrontation that has killed 13 people in Southeast Asia's bloodiest border dispute in years.
The fighting raised concerns that hostilities had spread 150km (93 miles) east of two other ancient Hindu temples where Thai and Cambodian troops have clashed sporadically since Friday, sending more than 50,000 people into evacuation shelters.
Thai regional army spokesman Prawit Hukaew said Cambodia fired rockets after two Thai F-16 jets patrolled the area.
Six Thai houses were destroyed and a Thai soldier was wounded, he added.
There were no reports of Cambodian casualties.
Thailand has pressed for a bilateral solution but Cambodia ruled out talks until a May 7-8 leaders' summit of the Association of South East Asian Nations (ASEAN) in Jakarta, insisting on third party mediation.
Thailand's foreign minister will meet with the chair of the Southeast Asian regional grouping on Thursday in Jakarta, as the neighbours come under mounting pressure to end the row.
Sovereignty over the three ancient, stone-walled temples: Preah Vihear, Ta Moan, Ta Krabeyand the jungle of the Dangrek Mountains surrounding them has been in dispute since the withdrawal of the French from Cambodia in the 1950s.
US Secretary of State Hillary Clinton said she was 'deeply concerned' and urged restraint, a comment echoed by Beijing.
'We hope that both Cambodia and Thailand will maintain calm and restraint, and resolve their problems through consultation,' Chinese Foreign Ministry spokesman Hong Lei told journalists.
Until Tuesday, hostilities had been contained to jungles near the 12th-century Ta Moan and Ta Krabey temples.
Thailand says the ruins reside in its Surin province according to a 1947 map.
Cambodia says they are in its Oddar Meanchey province.
Preah Vihear, was the scene of intense clashes from 4-7 February that killed 11 people.
It has been a source of tension for generations and the two countries have been locked in a standoff since July 2008, when the temple was granted UNESCO World Heritage status.
Thailand opposed the listing on grounds that the land around Preah Vihear was never demarcated.
An international court awarded the temple to Cambodia 49 years ago, but both countries lay claim to a 4.6 sqkm (1.8 sq mile) patch of land around it.
Although on the surface, the conflict appears to be a dispute over sovereignty and territory, many experts believe the fighting is fuelled by political interests on both sides.
The two governments could be seeking to discredit each other and appeal to nationalists at home, especially as Thailand prepares for a general election expected by July.
A change in government could be in Cambodia's interests.
Analysts said the Thai military could also be flexing its muscles to preserve its sizeable stake in Thailand's political apparatus and to satisfy conservative elites at odds with the country's powerful opposition forces.
The clashes are a setback for ASEAN, a 10-member bloc modelled on the European Union with ambitions to become a regional community by 2015, illustrating the limits to regional diplomacy after the Thai army rebuffed international monitors proposed by ASEAN foreign ministers in February.
ASEAN Secretary-General Surin Pitsuwan has urged immediate dialogue and said ASEAN's reputation was at stake.
Thailand has evacuated more than 30,000 villagers in two border provinces, while Cambodia said 24,000 people had been moved to safety, accusing Thailand of attacking villages 20km (12 miles) into its territory.
Posted by CAAI News Media at 10:30 am