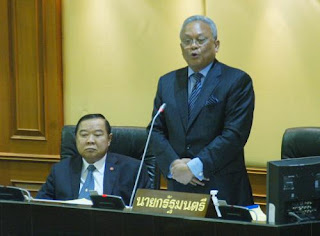 Thailand has acted with restraint to ensure a measured response to border skirmishes, Deputy Prime Minister Suthep Thaugsuban said Wednesday during the House query session on the Thai-Cambodian dispute.
"Thailand, its government and citizens want peace and strive for friendly relations with neighbouring countries; we are not a war-monger nation," he said, calling for bilateral negotiations to settle the dispute.
Suthep said the country had never provoked nor initiated the border attacks, which began in Surin on Friday, but was obligated to defend its territorial integrity.
He said he suspected the unresolved dispute related to Preah Vihear Temple might have triggered the Cambodian military attacks.
The Thai-Cambodian border skirmishes would not escalate into a full-blown war even though the Cambodian side appeared unwilling to stop firing into Thai territory, he said.
"Although Thailand aims for peace, it has to safeguard its territory," he said, explaining why Thai soldiers had to retaliate and return the Cambodian fire.
A number of government MPs took the floor to voice concern on the Thai-Cambodia border.
Bhum Jai Thai MP Sanong Thapaksornnarong from Buri Ram said he questioned the timing of the early election when the country was on the brink of a war with Cambodia.
He called on his fellow lawmakers to unite in defending the country, attacking certain opposition MPs who he said had adopted the Pheu Cambodia Party in lieu of their Pheu Thai Party.
He also alleged that foreign troops were assisting Cambodia to attack Thailand.
Puea Pandin MP Somkiat Soralamba said he suspected Cambodia took the military action to retaliate against the protests led by the People's Alliance for Democracy at Makkhawan Bridge.
The PAD rally organisers had made insulting remarks against the Cambodian prime minister for months, he said.
He also voiced concern that the fighting would escalate due to the presence of F-16 fighter aircraft at the border areas.
In the government rebuttal, Suthep said the F-16 jets were conducting a training flight not linked to the skirmishes.
Posted by CAAI News Media at 11:32 pm