Hun Sen urges ceasefire (They will stop shelling when your SIAM stop move your troops into cambodian territoty your idiot. Your dog trick could show the world that your Siamese are very good with liars)

Cambodia must stop firing before negotiations can be held to solve the border dispute, says Prime Minister Abhisit Vejjajiva. 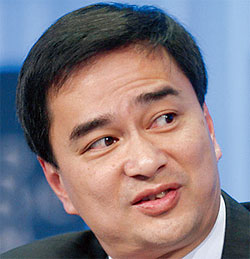 Cambodia said it was ready to talk, so why don’t they stop shelling? ABHISIT VEJJAJIVA
(They will stop shelling when your SIAM stop move your troops into cambodian territoty your idiot. Your dog trick could show the world that your Siamese are very good with liars)
A war of words between the two country's leaders broke out yesterday, dimming hopes for ceasefire talks.
Cambodian Prime Minister Hun Sen accused the Abhisit government of being war-happy, in a manner he had not seen under previous Thai governments.
''Cambodia is appealing for a ceasefire,'' Mr Hun Sen said in a speech in the capital Phnom Penh, adding that he was ready to hold talks with his Thai counterpart.
He said in his first remarks since border fighting began last Friday that he welcomed talks with Mr Abhisit at a meeting planned for Indonesia early next month.
But Mr Abhisit struck back in his response. ''Cambodia said it was ready to talk, so why don't they stop shelling,'' he said.
Each side accuses the other of firing first. Shelling continued for a sixth day yesterday. Cambodia opened fire into Surin for 15 minutes late last night, but Thai troops did not return fire. There was no immediate report of casualties.
Mr Abhisit said Thailand was doing its best to resolve the situation but it could not end the dispute without Cambodia's cooperation. 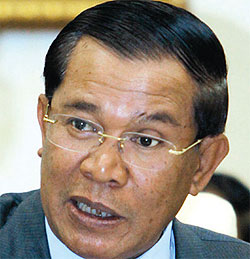 Cambodia is appealing for a ceasefire. HUNSEN


Mr Abhisit said the easiest way to enter negotiations was for Cambodia to hold fire, noting that a framework for talks was already in place.
Mr Abhisit yesterday travelled by an army plane to Surin province to visit soldiers injured in the fighting at the provincial hospital, and to meet displaced civilians at an evacuation centre.
Defence Minister Gen Prawit Wongsuwon plans to meet his Cambodian counterpart Tea Banh after returning on Saturday from a visit to China, on condition that the border skirmishes have ceased, said Gen Noppadon Inthapanya, Gen Prawit's secretary.
He said Gen Prawit was not scheduled to meet Gen Tea Banh yesterday because he was supposed to leave for China and had no plan to postpone it.
Earlier, army spokesman Col Sansern Kaewkamnerd said Gen Prawit refused to talk to his counterpart in Phnom Penh as suggested by Cambodia because he was frustrated about Cambodian media reports which said Thailand had accepted defeat.
Gen Noppadon said Gen Prawit's plan to talk to Cambodia did not suggest a defeat. Gen Prawit still wanted to resolve the dispute at the bilateral level.
Gen Prawit declined to discuss the conflict, saying he would rather wait until he is back from China.
Foreign Minister Kasit Piromya will meet Indonesia Foreign Minister Marty Natalegawa today during an Asean culture meeting in Jakarta.
They are likely to discuss the dispute issue as Indonesia is Asean chairman.
Meanwhile, field reports yesterday said one villager was killed and two others wounded in a cross-border clash in Surin's Phanom Dong Rak and Kap Choeng districts on Tuesday night.
The casualties were allegedly inflicted by Cambodian gunfire during the clash which started in the afternoon and continued until about 10.30pm. 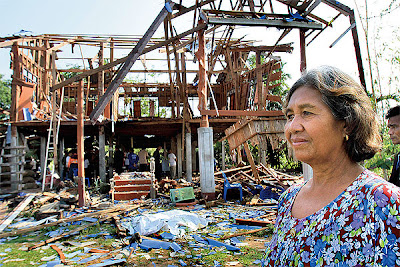 A woman stands guard over the artillery-damaged house of a relative, the village head of Ban Noi Rom Yen village in Kap Choeng district, Surin, on the border with Cambodia yesterday. TAWATCHAI KEMGUMNERD
The Public Health Ministry said the fighting had so far resulted in 94 Thais being wounded and six killed _ five Thai soldiers and one civilian.
The ministry said the border violence has forced nine state hospitals in Buri Ram and Surin to suspend all but emergency services.
Disaster Prevention and Mitigation Department director-general Wibul Sanguanpong said 142 villages in Phanom Dong Rak, Kap Choeng and Prasart districts of Surin have been declared emergency disaster zones caused by outside forces. Altogether, 29,677 people living along the Thai side of the border with Cambodia have been relocated to 22 evacuation centres in four districts of Surin, Mr Wibul said.
Cambodian media report eight soldiers killed. They include a colonel, a major, two captains and two sub-lieutenants, Thai intelligence said.
Army chief Gen Prayuth Chan-ocha has ordered the army to set up a front operation centre along the border in either Surin or Si Sa Ket provinces, a military source said.
The front operation centre will act as a coordinating centre between the army and soldiers in the border area.
Meanwhile, Privy Council president Gen Prem Tinsulanonda yesterday urged Thais to give moral support to troops at the border. Asked if the miliary has done its best to solve border conflicts, Gen Prem said the military always does it best. ''I pray for them every day. Thai soldiers are strong and we should give them support,'' he said.
Posted by CAAI News Media at 3:10 pm