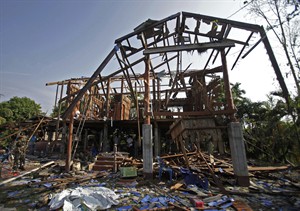 Thai soldiers, left, stand at the site of a destroyed house following the clash between Thailand and Cambodia in Surin province, northeastern Thailand Wednesday, April 27, 2011. Officials said Thailand and Cambodia have traded fire for a sixth day as an increasingly bloody border dispute drags on. (AP Photo/Sakchai Lalit)

via CAAI
By The Associated Press
PHANOM DONGRAK, Thailand — Artillery fire is booming across the Thai-Cambodian border for a seventh day as clashes continue between the two neighbours.
An Associated Press reporter says explosions from the fighting resumed before dawn Thursday.
In Cambodia, field commander Col. Suos Sothea says the fighting is centring again around the ruins of two crumbling stone temples from the Khmer Empire at Ta Moan and Ta Krabey, which have been caught in crossfire since Friday.
The fighting over contested territory has killed 14 people and forced tens of thousands of civilians on both sides to flee their homes.
Posted by CAAI News Media at 3:31 pm