More troops sent to Thai-Cambodian border as fighting goes on 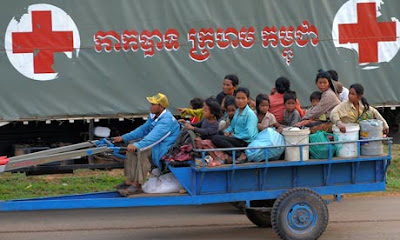 Cambodian villagers forced to leave their village near the Thai border in Oddar Meanchey province on Wednesday. Photograph: Tang Chhin Sothy/AFP/Getty Images
Military reinforcements, including heavy artillery and trucks packed with soldiers, poured into the area along the Thai-Cambodia border as fighting between the two countries entered into its sixth day with neither side showing signs of backing down.
Shelling and mortar fire between the two sides has led to tens of thousands of refugees evacuating to border camps with at least one civilian and 13 soldiers reported killed in the firefight.
The conflict is the most serious fighting between the two nations in decades and stems from a demarcation carried out in the 1950s by an international court which left the 12th-century Ta Moan and Ta Krabey temples and surrounding jungle areas in Cambodian territory.
Early on Wednesday morning mortar fire could be heard near the temples after fighting broke out at 5.15am and lasted nearly an hour. The fighting destroyed seven homes and injured more than 40 civilians.
"We are preparing for fighting in the early evening," Thai military spokesman Colonel Prawit Hookaew said from his busy makeshift headquarters. "This is the worst fighting we have had for a very long time."
In Thailand, heavy artillery and trucks packed with well-equipped soldiers could be seen travelling along empty highways towards the frontline. On the Cambodian side, truck-mounted rocket launchers are reportedly being deployed to the border.
In order to protect civilians from the mortar fire, more than 50,000 refugees on both sides of the border have been moved to camps away from the fighting. Cambodian military have reported villages being hit by mortar nearly 20km from the border.
Previous hope for an end to the fighting was lost when planned peace talks between Cambodia and Thailand were cancelled on Wednesday.
At a surprise visit to Koke Klang temporary refugee camp – home to more than 3,000 villagers who have escaped the fighting – Thailand's prime minister, Abhisit Vejjajiva, blamed Cambodia for the postponed meeting.
"We are ready to have talks with Cambodia, they said they wanted to, but then they continued to attack Thai troops so we had to cancel the meeting," he told refugees as they sat around on straw mats in the school-cum-camp. "Thailand will not invade Cambodia but if they attack us then we are prepared to fight back in order to save the country."
Cambodia said on Tuesday it would refuse bilateral talks until the meeting of Asean countries in Jakarta in May and are seeking international mediation.
Making some of his first comments on the conflict, Cambodian prime minister Hun Sen said in a speech to a women's group on Wednesday that Abhisit was to blame. "The current Thai leader likes war, provokes war," he said. "Cambodia is a small, poor country and has fewer forces, but don't you forget that an ant can make an elephant not get any sleep," he said. "Cambodian's weaponry is not just slingshots."
Despite the official line of conflict over sovereignty, experts believe domestic politics in both countries are to blame for the conflict. The Thai army is said to be dragging on the conflict by rejecting Indonesian observers, in order to exert its power and retain relevance in Thai politics.
In Cambodia, some believe Hun Sen is attempting to wield nationalist sentiment to gain support for his son. It is also believed that he could be attempting to discredit Abhisit and therefore boost support for opposition parties in the forthcoming elections.
Posted by CAAI News Media at 3:18 pm