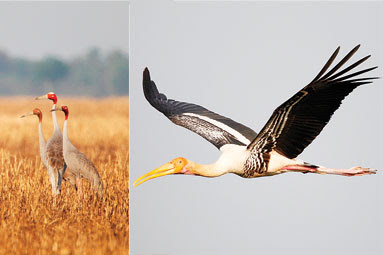 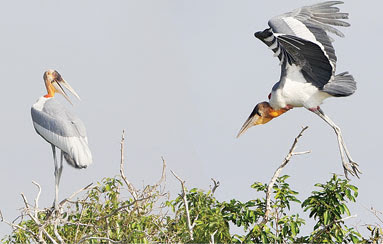 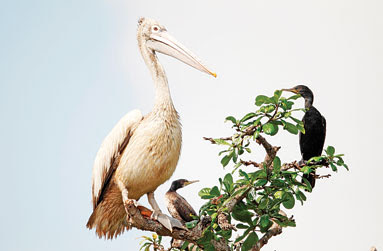 
Thursday, 28 April 2011 15:00Roth Meas
RARE birds flocking to Tonle Sap lake’s flooded mangrove forests at Prek Toal are attracting bird watchers from all over the world to the Sam Veasna Centre for Wildlife Conservation.
Guide Duong Nara, 30, explains that while the flooded forests provided ideal breeding conditions for rare species such as the greater adjutant and spot-billed pelican, visitors from all over the world were keen to take a closer look at these endangered birds.
Their interest has helped provide a living for many villagers, who help guide tourists to the best nesting spots and cook for them while they are in the area.
The ecotourism benefits are enormous, as the Wildlife Conservation Society has collaborated with locals to ensure that no hunting takes place, thus protecting the flooded forest for future generations.
“Many kinds of fish flourish in Tonle Sap lake,” says Duong Nara, “which is ideal food for the birds. And the flooded forests provide shelter for them, especially the species which scavenge in the shallow water such as the greater adjutant, milky stork or painted stork.”
However, the plains surrounding the Tonle Sap lake are only flooded in the wet season. In the dry season, which usually ends around May, flocks of migratory birds congregate at the Prek Toal sanctuary.
With more than 100 bird species having been sighted in the area, there are plenty for twitchers, as bird watchers are sometimes known, to tick off their lists of sightings, but most visitors are particularly keen to see the storks, adjutants, pelicans, sarus cranes and comb ducks, says Duong Nara.
And when the rains come, that’s a signal for the birds to fly off to other pastures, because the water level becomes too deep for waders to fish.
But in the dry season, all these bird species return to their old shelters at Prek Toal, where they nest in colonies in trees to lay and hatch their eggs between October and February.
That’s the best time to see these species in all their glory, says Duong Nara, who knows all the best hidden nesting spots in the area.
These birds are rare because species like the greater adjutant lay only one or two eggs in each season, he explains.
About 520 visitors a year come to the Prek Toal centre, with another 200 visiting bird reserves at Ang Tropang Thmor, about 56 kilometres from Banteay Meanchey town, says the Sam Veasna Centre’s booking manager Seng Raksa.
That’s where bird watchers go to see the rare sarus crane, which prefers living on grass fields near water, according to Duong Nara.
“It’s rare because the typical clutch is one or two eggs laid just once a year,” he explains.
Many clients spend one or two weeks photographing birds during their visits, with the best time between December and May, says Seng Raksa.
“And if we can’t get close to the birds, we have telescopes for visitors, but most of the time they carry their own bird-watching equipment.”
Posted by CAAI News Media at 9:21 pm