Thailand and Cambodia: The Endgame? 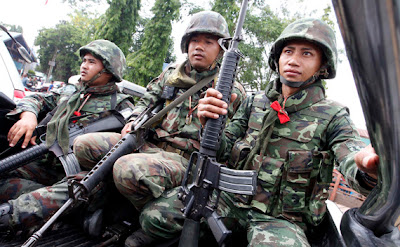 Thai soldiers are seen during a visit by Thai Prime Minister Abhisit Vejjajiva, following armed clashes on a disputed border area between Cambodia and Thailand, at a makeshift camp in Surin province, 30 km (19 miles) from the Thai-Cambodia border, April 27, 2011. (Sukree Sukplang/Courtesy Reuters)
As the conflict between Thailand and Cambodia over the Preah Vihear temple spirals out of control, with fighting now spreading to new locations, outside observers have desperately been trying to cool tempers. Not only Indonesia but also other ASEAN countries, including Vietnam, have been putting pressure on the two sides to back off from the brink. China apparently has applied pressure as well. ASEAN as an organization fears that the continuing dispute will only make it look more feckless than it is often perceived to be – and so Thai Prime Minister Abhisit Vejjajiva apparently will discuss the conflict with Cambodian Prime Minister Hun Sen on the sidelines of the ASEAN summit in May in Jakarta.
Do not expect any miracles. Key constituencies in both nations are benefiting too much from the border dispute to allow it to die out completely now. As I mentioned yesterday, the Thai army clearly sees the dispute as a way to rally nationalist sentiment and also, most importantly, to entrench the armed forces at the center of national security and political life. In the run-up to what is expected to be a hotly contested national election, keeping in the center of politics will be crucial for the military, and so they are unlikely to abandon the dispute.
Cambodia’s key constituencies have just as much reason to prolong the dispute, even though citizens may suffer. (But then, having citizens suffer has never been a major problem for policymakers in Cambodia.) The dispute allows Hun Sen’s oldest son, Hun Manet, to play a larger role in military policymaking, potentially positioning him one day to take over running the country from his father. And the dispute, by fanning nationalist flames in Cambodia as well, distracts from other pressing problems, such as the pending eviction of thousands of poor Cambodians from central Phnom Penh to make way for a development given to a close associate of the prime minister. With Cambodia’s domestic troubles unlikely to disappear, the Preah Vihear dispute probably will not either.
Posted by CAAI News Media at 3:22 pm